SÃO PAULO IS A CITY OF SUPERLATIVES. Its sheer numbers — from its staggering population of about 20 million people in the metro area to boasting more than 100 museums; 20,000 restaurants; and 100-plus parks — plus its whirlwind 24-hour pace make it one of the most exciting, and sometimes exhausting, cities in the world.

As the capital city of the southeastern state of the same name, São Paulo is not only a political center but also a financial, commercial, cultural and industrial hub. Its history dates back to 1554, when Jesuit missionaries came to the region and founded the city, naming it for Saint Paul. While it grew slowly during its early years, it became a major force in the 19th century when coffee replaced sugar as the major cash crop in the region. The economic opportunities drew an enormous influx of immigrants to the city then as well as in the early 20th century, when factories were booming.

The city remains a true melting pot to this day, with a multitude of ethnicities represented. Besides being home to the largest number of people of Japanese descent outside of Japan, it is home to Italian, Arab, German, Chinese, Armenian, Lithuanian, Greek, Korean, Polish, Hungarian, Peruvian, Bolivian, Haitian and African communities.

Today, São Paulo (known as Sampa by locals) shows no sign of slowing down anytime soon, with its booming economy, ongoing construction and innovative and creative population. Paulistas, as local city residents are called, welcome visitors and are always ready to offer a recommendation to their favorite restaurant, bar or latest hot spot, which seem countless.

In fact, São Paulo’s range of museums, cultural venues, restaurants, bars, parks and attractions can be overwhelming to a newcomer; imagine New York City times 10. One way to tackle the city is to stick to one neighborhood at a time. This also helps mitigate the city’s epic traffic that can prove a timeconsuming hassle.

While much of the city’s architecture is modern, some historic highlights include the Neo-Gothic Catedral da Sé de São Paulo, the largest church in the city, and the lovely Theatro Municipal de São Paulo, both located in the city center.

Avenida Paulista, one of the city’s premier streets, presents a bustling corridor of shops, cafés and attractions, including the Museu de Arte de São Paulo, a must-see museum with works by artists like Van Gogh, Rembrandt, Picasso and Degas. Nearby you’ll also find the Museu do Futebol, celebrating the history of football (soccer) in Brazil. Dedicated shoppers will want to head to the Jardin neighborhood, boasting some of the city’s most exclusive boutiques along Rua Oscar Freire. 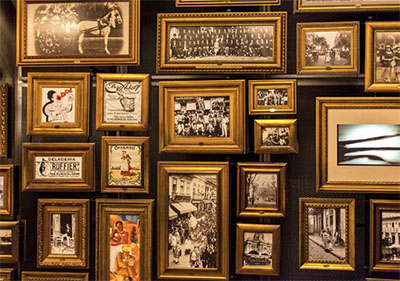 A unique and charming neighborhood, Liberdade houses the largest community of Japanese people outside of Japan. Lantern street signs line the streets, with scores of shops, bakeries and cafés specializing in Japanese products and foods. The peaceful Oriental Garden offers a nice break, and you’ll find the city’s best sushi and ramen restaurants here.

This city loves its festivals, and at any given time you’re sure to find something being celebrated. São Paulo’s Art Biennial is internationally famous; its Pride Parade one of the biggest in the world (São Paulo is the most LGBTQ+-friendly city in Latin America); its Fashion Week plays host to top names and faces; and while not as big as Rio’s, its Carnival is still impressive to see.

No matter how long your visit to São Paulo, you’ll likely only scratch the surface of all this fascinating city has to offer.

CHECKING IN WITH PABLO CHIOZZA

What makes São Paulo different from other cities in Brazil?
São Paulo is a metropolitan city with a mixed charm between art, culture and commerce. This city is known as the chief industrial city of Latin America and South America’s financial hub. In addition to business travelers, tourists often look into São as a stylish paradise and enjoy its vast culinary attractions. Diversity is also a main thing in São Paulo; it has a strong Italian and Japanese heritage. In fact, it has the largest population of Japanese diaspora.

What local attractions do you recommend?
There is a lot to do in São Paulo, from indulging yourself with fine dining to experiencing diverse cultures or even discovering paradisiac beaches, which many people don’t know about. The main gastronomic attraction in São Paulo is the Municipal Market, located in the historic center of the city. Terraço Itália, an upscale restaurant, is a great place to enjoy a remarkable view of the metropolitan city. Parque Ibirapuera is a popular park for Paulistas; and the Immigration Museum, which exhibits Brazilian history of its first immigrants and the roots of Brazil’s diverse culture, is excellent. 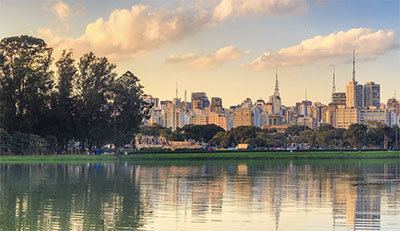 You mentioned some hidden gems.
As for the not-so-well-known but pristine beaches on the coast of São Paulo, you can visit the archipelago Ilhabela, a tropical island full of adventures with hiking trails and waterfalls. Another beautiful place is Maresias Beach, located on São Paulo state’s northern coastline. Maresias is well-known to Paulista surfers because of its big waves. On the southeast coast, in the state of São Paulo, you can visit Ubatuba, which has a variety of beaches adjacent to the Atlantic rainforest.

Are there any cultural differences visitors should be aware of when visiting Brazil?
People in Brazil are social, and personal space is not one of their concerns.

Things to Do in São Paulo

There’s a lot to see and do in this busy megalopolis whether you’re a foodie, an architecture buff or a fan of the arts, given the multitude of world-class museums, a hopping culinary scene and all sorts of outdoor attractions.

The Mercado Municipal de São Paulo, which first opened in 1933, is a must-visit spot, with about 300 food stalls selling everything from fresh fruits to meat to seafood. At several cafés you can take it all in and dine on local specialties like mortadella sandwiches and pasteis, tasty fried dough pockets filled with cheese, meat or fish. 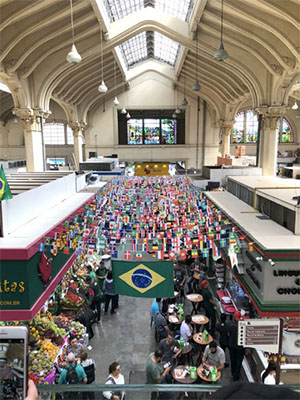 For a welcome respite from the hustle and bustle of the city, the Jardim Botânico provides just the spot. Not only can you enjoy orchids, rainforest plants and more than 340 native species, it’s a birdwatcher’s paradise, with more than 100 different kinds spotted on the grounds.

A favorite way to see the sunset is at Terraço Itália, located in the Edifício Itália, one of the tallest buildings in the city. Towering 46 stories above central São Paulo, it boasts spectacular panoramic city views. Enjoy the observation deck, the rooftop restaurant or its piano bar.

São Paulo-Guarulhos International Airport lies about 15 miles southwest of the city center. Taxi fare runs about $70–80, no matter how bad the city’s notorious traffic is at the time. A trip can take anywhere from 45 minutes to 1.5 hours. Public transport options include the Airport Bus, which stops at major hotels downtown and costs about $14. Congonhas Airport, about five miles south of downtown, is a base for domestic flights only; it costs about $15–40 to get there by cab from the city center.

COMING AND GOING
U.S. citizens must present a valid passport and a tourist visa upon entering Brazil. You can apply for a visa online or through a Brazilian consulate in the United States.

Where to Stay in São Paulo

HOTEL FASANO SÃO PAULO Elegant, luxurious and sophisticated, this 60-room hotel makes a warm and welcoming base in the heart of the trendy Jardin neighborhood. Rua Vittório Fasano 88 $$$$$

RENAISSANCE SÃO PAULO The sleek and enormous Renaissance offers a hub for business travelers, who enjoy the club-level rooms which include lounge access with perks like breakfast, a business center, meeting rooms, snacks and beverages. Alameda Santos 2233 $$$$

A CASA DO PORCO Paying homage to everything pork, this creative restaurant wins rave reviews and offers a nice change of pace from the ever-present beef served at many Brazilian restaurants. Rua Araújo 124 $$$