DON’T LET THE WEATHER FOOL YOU — Skye can be “a wee bit moist” on occasion, as 19th-century Cuillin mountaineer pioneer Charles Pilkington once said, describing Scotland’s island of adventure.

The largest island of the Inner Hebrides, the Isle of Skye conjures images of King Arthur, fairy glens mixed with primeval myths, and Jurassic parks. The windswept island setting has been a popular filming location, most recently in last year’s release of King Arthur: Legend of the Sword. The other big news: The world’s largest dinosaur and the oldest dinosaur fossils ever found in Scotland were discovered earlier this year at Rubha nam Brathairean, commonly known as Brothers’ Point.

Nearly 50 miles long with a rugged coastline so deeply indented you are never more than five miles from the sea, this magical place of the Hebrides lets you easily create your own legends. Submerged in mountain ranges with miles of dramatic coastline, a jaw-dropping, page-turning history unfolds by land and sea. The place awaits those ready to wrap themselves in Hebridean adventure.

Start at the Eilean Donan Castle. Located in the Scottish Highlands on the main tourist route to the Isle of Skye, families and couples can discover a riveting Viking history at this 13th-century castle. The other big deal is the location. Situated on a wee isle at the confluence of three great lochs, it presents one of the most iconic images of Scotland, so get your smartphone ready to snap Instagram shots. The scene from this vantage point sets the mood for tall tales and strong gales.

Once in Skye, in between the heritage sites visit geological features that dot the landscape. Road trippers snake along the Trotternish Circuit, a 50-mile drive spanning the northernmost peninsula. Weekenders inch the circuitous drive, stopping at iconic landmarks like the weathered basaltic pinnacle at Storr, with a popular landmark once used by sailors dubbed The Old Man of Storr. Marvel at the perilous Cuillin Ridge along the haunted Cuillin Hills (an outlaw named MacRaing is a ghost here) and be sure to see the heavenly swath of beauty known as Quiraing.

Named from an Old Norse term, Kvi Rand, meaning “Round Fold,” within this massive landslip teetering on the Trotterernish Ridge is the film location of King Arthur: Legend of the Sword. Quiraing also doubles as an Earth trekker’s dream. It features one of Skye’s best-loved trails, where healthy hikers veer onto an often muddy wild path for eye-candy scenery. 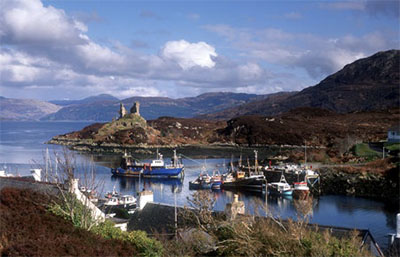 For Jess Ponting, director, Center for Surf Research, San Diego State University, family trips to the Isle of Skye include visits to Quiraing. “With miles of green hills and an array of little ponds, traveling here feels pretty otherworldly,” he says, recommending travelers get an early start when visiting to make sure they get in before the crowds.

For mellowing out and catching up with the locals, nothing matches visiting a cozy Scottish pub. One is the local watering hole at The Edinbane Inn in the island’s largest town of Portree. Diners slide into worn wooden seats to savor the tastes of cullen skink, a creamy fish stew, or another favorite dish of mussels accompanied by the prerequisite malt whiskey. Traditional Celtic folk tunes fill the rafters, ranging from musical medleys doled out by a moody bagpiper and guitarist to cheerful notes from a fiddler.

The ultimate watering hole — though technically it doesn’t achieve pub status — is the Talisker Distillery. Set on the shores of Loch Harport in the village of Carbost, couples and old friends can tour the island’s only single malt whisky distillery, where luxury malts reign. In a post-tour finale, prepare for mindbending whiskey tastings of silky-smooth single malts aptly named with local twists like Talisker Storm or Talisker Neist Point, named after a headland on the westernmost shore. 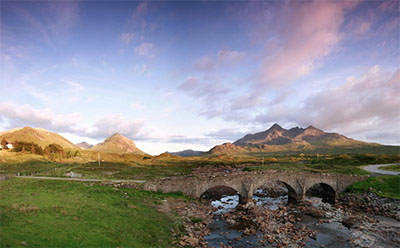 Kara Harms of Whimsy Soul, a lifestyle blog, honeymooned on the Isle of Skye last fall. “I fell in love with the isle,” she says, recounting a memorable walk the newlyweds took among the Fairy Pools, magical blue pools on the River Brittle, located near Glenbrittle. “Sheep will most likely be sleeping at the entrance to the path to add to that Scottish charm,” she adds. She recommends taking a thermos of coffee for the perfect leisurely morning stroll.

For the ultimate sunsets sure to please anyone, head to Neist Point. Drive up to the famous lighthouse teetering on the most westerly tip of Skye. Handholding couples embrace, illuminated by the golden-hued backdrop as families pile out of their vehicles, rushing off to snap that perfect family photo against the immense horizon, smiling the entire way.

Isle of Skye Info to Go

Car rentals prove the best way to travel across the island, allowing more time for leisurely visits and self-drives. Book a car from one of the rental companies located at either the international airport in Glasgow (GLA) or the nearest local airport in Inverness (INV). Expect a five- to six-hour drive from Glasgow to Portree in Skye. Fort William, a small town midway with shops and good places to eat, offers a convenient pit stop. From Inverness, the drive to Portree takes about three hours. Driving is on the left side of the road; be prepared for narrow, rural, single-track, back-country routes.

Where to Stay in the Isle of Skye

MARMALADE Travel back in time at this classic Georgian hideaway, where the zest for life pulses at the heart of the boutique property’s philosophy. The hotel is named after the marmalade once made at this private residence of the treasurer of Lord MacDonald of Sleat. Home Farm Road, Portree $$$$

Restaurants in the Isle of Skye

Millions of Passengers Travel Through the World’s Largest Cruise Ports

Ever wonder what could be more relaxing than a cruise at sea? I found the answer when I embarked on the inaugural sailing of Princess Cruises’ brand-new Medallion Class Discovery Princess. An indulgent massage and hours spent in the Enclave, the onboard spa’s thermal suite, brought both my mind and body to a state of blissful contentment, the ideal complement to active days in port.