Temporarily, let’s erase the city-state of Singapore. All the skyscrapers of the Central Business District, gone. The world’s second-busiest container port, gone. The airport consistently voted the best in the world, gone. The shopping malls, the famous Raffles Hotel, the theme parks of Sentosa Island, all gone. The futuristic Gardens by the Bay, gone. Nearly two centuries of development swept away.

We’re left with tropical forest and mangroves, the sounds of insects and birds and the rustle of lizards and snakes in the leaf litter. Sungei Buloh Wetland Reserve remains one of the last fragments of the original Singapore, transporting us back to the time when this island immediately off the southern tip of the Malay Peninsula was a wild, neglected backwater.

Standing here in the humid heat, looking out at a width of greasy, estuarine water, can you see what Sir Stamford Raffles saw in 1819? Can you envision the transformation of this untamed island, less than half the size of Rhode Island, into a globally significant trading hub? It seems a preposterous fantasy.

But within 30 minutes of leaving the reserve, we are in the midst of that fantasy made real. Despite all the odds stacked against Raffles’ plan, one factor stood strongly in his favor: location. Singapore is strategically positioned at the gateway to the Malacca Strait, through which all sea traffic between Europe (and India) and the Orient (and Australasia) must pass.

Modern Singapore continues to reap the benefit of geography. Its port thrives, and its airport is one of the world’s busiest international hubs. In addition, it established itself as a leading financial and banking center and leads the world in its embrace of new technologies.

Downtown Singapore offers a towering, shimmering testament to the country’s success. It ranks as one of the cleanest, most efficient countries in the world and also, according to the Pinkerton Risk Index Report, the world’s safest country in which to do business.

Greenery grows everywhere, softening the edges of the world’s third-most densely populated territory (after Macau and Monaco); the government is well on its way to achieving its aim of maintaining a “City in a Garden.”

Supertrees at Gardens by the Bay © NIKOLAI SOROKIN | DREAMSTIME.COM

The population of 5.5 million largely descend from the immigrants brought in from China, India and neighboring Malaysia, resulting in a unique cultural melting pot.

British rule lasted from 1819 until 1959 (with a three-year period of Japanese occupation during World War II). The fledgling independent nation underwent an initial period of upheaval, including briefly becoming part of the federation of Malaysia. But Singapore secured full independence in 1965, and over the next half-century the country transformed into an economic powerhouse, one of the four “Asian Tigers” (along with Taiwan, Hong Kong and South Korea).

Much of the success is due to a visionary of equal stature to Sir Stamford Raffles. Lee Kuan Yew, the founding father of modern Singapore, ruled the country as a benign autocrat. Under his leadership Singapore leapt from the Third World to the First World in a single generation. When he died in 2015, aged 91, 1.7 million Singaporeans filed past his coffin.

Not everyone is entirely comfortable with Singapore’s strict system. Here selling chewing gum is illegal (the mess it makes on sidewalks is deemed antisocial). Spitting, not flushing a public toilet, feeding pigeons, jaywalking and homosexuality are all illegal. Spraying graffiti is punishable by caning, and drug smuggling carries the death penalty. For outsiders, the strictures can feel overbearing, and the country is perhaps too neat and disciplined for its own good. It lacks some of the grit and liveliness of other great cities.

But Singapore is a one-off, and in many respects its record is enviable. The Organisation for Economic Co-operation and Development rated its education system the world’s best, with Singaporean students excelling particularly in math and science.

Always an early adopter of new technologies, Singapore quickly embraced the internet. More than 88 percent of households are connected, and the country boasts the highest broadband speeds in the world.

Nearly 200 years ago, Sir Stamford Raffles identified exciting potential in this sweltering tropical island. When we stand today on the Esplanade facing Marina Bay, hedged by a dense forest of skyscrapers, it is hard to imagine what it will look like two decades from now, let alone in another two centuries. Singapore’s journey into the future is all about making the impossible possible.

Things to Do in Singapore

For those who grew up marveling at artists’ impressions of what the cities of the 21st century would look like, the reality has largely proved disappointing, with one notable exception: Singapore.

The city’s Marina Bay district, in particular, matches the flights of fancy of science fiction. A trio of skyscrapers support a sky park that features an infinity pool the size of a lake. The ArtScience Museum architecturally resembles a giant, blossoming flower. The $1 billion Gardens by the Bay features 250 acres of landscaped tropical greenery centered on a grove of 160-foot manmade supertrees linked by a skyway which seem (especially when gaudily lit up at night) to come straight out of the movie Avatar. 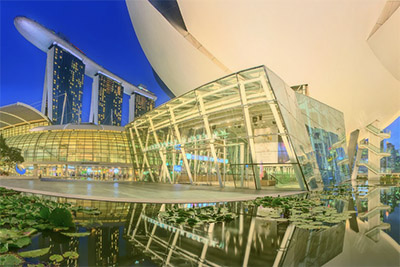 View of water lilies under ArtScience Museum and Singapore skyscrapers in the background © BOULE13 | DREAMSTIME.COM

The Singapore Flyer, until 2014 the world’s tallest Ferris wheel, provides a bird’s-eye view of Marina Bay, the Central Business District and the colonial district. From a maximum height of 541 feet it becomes clear the extent to which Singapore is achieving its aim of being a “City in a Garden.” Just like the supertrees in the Gardens by the Bay, the city’s high-rises sprout from luxuriant undergrowth.

Singapore’s leap into the future has not wiped out its past entirely. Many buildings from the colonial era survive, with frontages as ornate and white as wedding cakes and roofs of red clay tiles.

The National Museum of Singapore, in situ since 1887, offers an excellent introduction to the city-state’s history. The “We Built a Nation” exhibition focuses on the period of 1965–1975, which transformed the former British colony (and short-lived federal state of Malaysia) into a proud and dynamic independent country.

The Asian Civilisations Museum provides an overview of history on a continental scale, with many priceless exhibits. It proves a useful introduction to the cultural currents that flow through Singapore.

Little India was traditionally the main settlement for Tamil immigrants to Singapore. Although government policy since independence discouraged culturally segregated

CHECKING IN WITH BRAD ROBINSON

How did you end up in Singapore? I’m originally from Oklahoma, and I moved first to Penang, Malaysia, in 2003, heading up a security firm that focused solely on supply chain security. My business partner and I ended up specializing in the more technical side of security. When Singapore approved its first gaming licenses and opened two mega integrated resorts (Marina Bay Sands and Resorts World Sentosa), we were already seen as an industry leader in the region, so we opened our Singapore office to focus on those projects and I moved here full time.

What opportunities does Singapore offer American investors? Singapore teems with opportunities. The government backs small and medium-sized enterprises well, and there’s a great startup culture in almost every sector. Access to capital, as well as the many government grants, make it a solid place for entrepreneurs, and the fact Singapore is a regional hub for just about every industry means there are seemingly countless investment opportunities. It’s also ideally located in the region and one of the safest places on Earth.

Compared to the United States, is it easier or more difficult to start a business in Singapore? It’s easier in Singapore, by far. Less red tape, and the tax code is easy to understand. I’ve set up companies all around the region, and I’ve never operated in a country as smooth as Singapore.

Are there significant cultural differences American investors should be aware of? It’s a cultural melting pot, which is one of my favorite things about residing here. Every race and religion can be found; but because it’s so ethnically diverse, there’s an amazing level of cultural understanding across the board. Just be nice, be respectful, and it’s a non-issue.

What are the key future developments to look out for? The fintech (financial technology) game is already at a full sprint here. I’d expect significant opportunities to develop in the near term.

Which local attractions do you recommend for visitors? Just get out and be in Singapore. Malay, Chinese and Indian communities have created a food culture that’s amazing. The integrated resorts (casinos) are world-class from their facilities to dining, and the nightlife offers everything you could imagine. The Singapore Night Safari is somewhere I take visitors. It never disappoints!

Where to Stay in Singapore

Raffles Singapore The prime address in Singapore since 1887. Tasteful modernization keeps the hotel up to date without compromising the famous colonial ambience. 1 Beach Road $$$$

The Halia at Singapore Botanic Gardens Enjoy gourmet Singaporean food in tropical surroundings. The restaurant is attractively set within the lush grounds of the Botanic Gardens. 1 Cluny Road, Ginger Garden $$$$

Makansutra Gluttons Bay Hawker stalls selling quick and cheap street food are more formal than they used to be but remain popular. Gluttons Bay is the best of the city’s hawker centers. 8 Raffles Ave., 01-15 Esplanade Mall $$