As the world continues to emerge from the pandemic- era slowdown, hoteliers move aggressively to satisfy the evolving tastes of upscale travelers with an array of new hotels.

According to a recent report from Lodging Econometrics, the top countries for new hotel development are the United States and China, but luxury-seeking travelers will find a variety of enticing new options around the globe.

Here are some of the most noteworthy openings in the pipeline for 2023.

IN THE UNITED STATES, the nation’s capital prepares to welcome several new hotels next year. Among the largest new properties is Marriott Washington DC NE, which opens in spring 2023 at NoMa CNTR, a mixed-use development with extensive dining and shopping venues as well as luxury residences. The 235-room hotel will feature a restaurant and a rooftop bar.

French industrial architect and designer Philippe Starck will make his mark in Washington with MOB Hotel, the first of five hotels planned for North America. The property will exude a decidedly artsy vibe, with a variety of cultural programming and concerts scheduled throughout the year. Also about to open next year in Washington, D.C., are Arlo, a 420-room boutique property located near the H Street corridor, and a second Royal Sonesta, a 274-room hotel that opens in spring 2023 near Union Station. 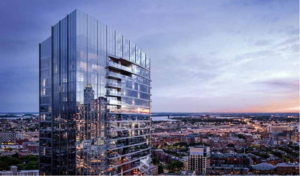 Farther up the Northeast Corridor, check out one of the newest upscale hotels in Boston, Raffles Boston Back Bay Hotel & Residences. The 147-room property features five food and beverage outlets, a spa, indoor pool and rooftop garden terrace.

Travelers to the Windy City, meanwhile, will find a new luxury option when The St. Regis Chicago opens its doors in early 2023, complete with a spa, indoor pool and a 5,000-square-foot ballroom.

In central Florida, new hotels in the works include the 433-room Conrad Orlando, which opens in summer 2023 on Evermore Bay as part of Evermore Orlando Resort, a fresh revamp of the former Villas of Grand Cypress development. Guests will enjoy access to two Jack Nicklaus-designed, 18-hole golf courses, among other amenities. 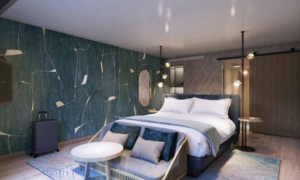 San Antonio, Texas, is yet another city experiencing hotel growth. New properties for 2023 include The Otis Hotel San Antonio, the city’s first Autograph Collection property; Arista San Antonio, a 112-room property in the River Walk area; and a new InterContinental property that’s the result of a $50 million overhaul of the former Wyndham San Antonio River Walk.

Foodies may want to head west in 2023 to sample the works of Chef Charlie Palmer, who partnered with hotelier Christopher Hunsberger to found Appellation, a new hotel brand that aims to blend culinary and hospitality elements in new ways. The launch properties include Appellation Sun Valley in Idaho and Appellation Healdsburg in California’s Sonoma County.

Also on the West Coast, Fairmont Hotels & Resorts prepares to place its highly regarded brand on a classic hotel in Long Beach, California, when Fairmont The Breakers, Long Beach opens its doors following a massive upgrade to the original 1920s structure, which once attracted celebrities from around Southern California.

Nature lovers, meanwhile, won’t have to give up on creature com- forts when they visit Utah’s Zion National Park next year. Spirit Zion will open in summer 2023 with 36 one- and two-bedroom suites and four five-bedroom homesteads along Clear Creek Mountain. Similarly surrounded by natural beauty is Kona Village, A Rosewood Resort, a renovated and rebranded property located on 81 acres along the Kona Coast of the Big Island of Hawai‘i.

LATIN AMERICA AND THE CARIBBEAN also score big with new luxury developments. In Los Cabos, Mexico, for example, a new Park Hyatt and Four Seasons Resort and Residences Cabo San Lucas at Cabo del Sol will both debut next year, while on Mexico’s Caribbean coast, new properties include The St. Regis Kanai Resort, Riviera Maya, and Riviera Maya Edition at Kanai, both located within the new Kanai resort community. The St. Regis will entice guests with a 20,000-square-foot spa and wellness center, while Edition at Kanai will boast a 2,217-square-foot penthouse suite. 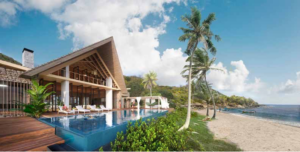 In the Caribbean top new properties include Cabot Saint Lucia, located on a 375-acre peninsula with a Coore & Crenshaw-designed 18-hole golf course. In Jamaica, Sandals Dunn’s River, slated to open in May 2023, features a private catamaran, villa-style accommodations and SkyPool suites with private infinity pools.

EUROPHILES WILL FIND lots of new reasons to travel next year. The Peninsula Hotels, for example, will debut two properties: The Peninsula Istanbul, which opens in February 2023 in the Turkish capital’s Karaköy district, and The Peninsula London, which opens in April 2023 with views of Hyde Park Corner and Wellington Arch in the upscale Belgravia district. 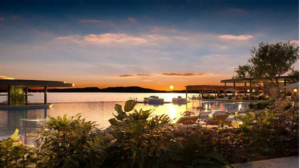 Also new in London, Mandarin Oriental Mayfair debuts in early 2023 on Hanover Square with 50 guestrooms and 79 residences as well as a spa and a restaurant headed by Michelin-starred chef Akira Back. The company also prepares to launch Mandarin Oriental, Costa Navarino, a 99-room property set to open in spring 2023 with 48 “pool villas” in Greece’s Peloponnese region.

Rosewood Hotel Group is also in growth mode in Europe; next year it will unveil two new properties: Rosewood Munich, which opens in early 2023 within two historic buildings on Kardinal-Faulhaber-Strasse, in the historic city center, and Rosewood Amsterdam, set within the former Palace of Justice overlooking Prinsengracht, one of the city’s legendary waterways.

Globetrotters looking for a stylish new option in Spain, meanwhile, might consider Son Bunyola Mallorca, a 26-room hotel, part of the Virgin Limited Edition portfolio, in Mallorca’s Tramuntana region. Scenic water views will likely also prove a big draw at Ikos Odisia, a resort slated to open in May 2023 on the Greek island of Corfu. The all-inclusive property will feature suites, bungalows and villas as well as menus created by Michelin-starred chefs and an array of spa experiences.

LOOKING TO AFRICA and the Middle East, Tswalu Kalahari, billed as the largest privately owned reserve in South Africa, is preparing to add a third lodge that promises to be the reserve’s most luxurious: Loapi, offering six one- and two-bedroom villas. In Qatar new options include Rosewood Doha, to feature 185 rooms and suites, eight dining venues and an entertainment lounge. Jumeirah Marsa Al Arab will debut next year on one of Dubai’s private beaches with 386 rooms, four penthouses and views of the Arabian Sea.

OUTSTANDING NEW HOTELS in the Asia Pacific region include Bellustar Tokyo, on the 39th through 47th floors of the new Kabukicho Tower, billed as Japan’s largest hotel and entertainment complex ediface. 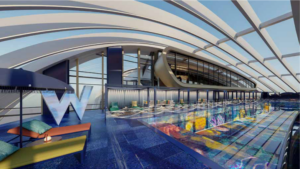 In Australia, W Sydney plans to open in the second quarter of 2023 on the Darling Harbour waterfront. The 585- room property, set in a new development called The Ribbon, will be the largest W hotel in the world.

Wellness-minded travelers may consider an inspiring retreat at a new hotel in Thailand called Aleenta Chiang Mai Resort & Spa, set to open in January 2023. Part of Akaryn Hotel Group, the resort will offer a spa and wellness center focused on customized medical and wellness retreats, with holistic treatments and programs centered around diet, nutrition and mental well-being. On-site staff will include a doctor, nurse and “master healer,” assuring a visit that combines sumptuous amenities and healthful activities.