Designers Dream Big When it Comes to Aircraft Seating Concepts

Privacy, flexibility and sustainability are just a few key words in the future of airline seat design. Airlines across the globe reconfigure coach, premium, business and first-class offerings with concepts like sleep pods; adjustable seating panels; and lightweight, sustainable materials.

Some of the most unique concepts share the spotlight in the annual Crystal Cabin Awards, the only international award for excellence in aircraft interior innovation, as designers, engineers and visionaries collaborate to create new cabin configurations. According to Angus Baigent, manager of marketing and communications, Crystal Cabin Awards, an important growth market currently trending for seating is economy plus, with airlines expanding their offerings in that category. “Another is premium offerings on single-aisle aircraft,” he said, as planes such as the extra-long Airbus A321-XLR will make intercontinental routes possible on narrower aircraft. “Passengers will need to be kept more comfortable on smaller planes for longer flights.” 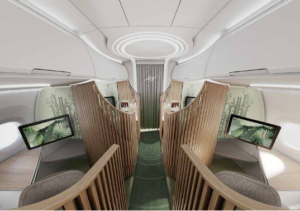 Other concepts, such as the Chaise Longue by Alejandro Núñez Vicente, focusing on a double-decker plane seat, appear less likely to be implemented. “It’s certainly innovative, but I personally doubt we’ll see it fly,” Baigent said.

Airline consultant Scott McCartney, who covered the industry for The Wall Street Journal for 30 years, concurs concepts like staggered seating that require an airline to change the configuration of the coach cabin are not practical since it’s hard for airlines to completely replace all coach seats at once. “If a coach seat has a life of seven to 10 years, then you’ve got different airplanes configured different ways. That’s a level of complexity that makes it very hard for the airline, and it becomes very frustrating for the customer,” he said. “Airlines are really resistant to those kinds of massive change.”

McCartney noted the best option for selling totally new designs for seating is with startup airlines. “They can do all their seating in the same way because they’ve got three airplanes. It’s different if you have 900 airplanes.” 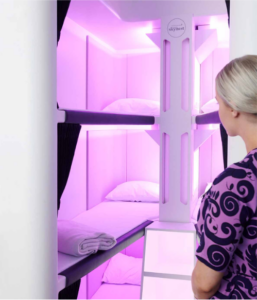 One past entrant to the Crystal Cabin Awards now being phased into service is Air New Zealand’s economy sleeping pod concept, which it will introduce in its new Boeing 787-9 Dreamliners, due to arrive in 2024. The Skynest pods will be the world’s first for economy travelers and feature two sets of three bunk beds. As of publication, the airline had not announced whether the pods will be available for an entire flight or blocks of time.

“I think others have talked about taking some space below the main cabin deck and creating sleep pods — similar to crews that have beds where they can sleep when they’re on break on a lot of international flights,” McCartney said. “Why not do the same for passengers, so you can leave your coach seat and go downstairs to your sleep pod and get four or five hours of sleep? You can probably do a couple of different shifts in the sleep pods, and people would pay extra for that.”

The Dreamliners will also include a new Business Premier Luxe seat, designed for customers looking for more space and privacy, with a sliding panel door allowing enough room for adjoining passengers to share a meal. Depending on the configuration, Air New Zealand’s Boeing 787-9s will feature either four or eight of the elevated business-class seats.

Another seat receiving attention in this year’s Crystal Cabin Awards is the AirLounge from Collins Aerospace — a cocoon-like business seat Finnair, the launch airline for the design, compares to a piece of Nordic furniture. The scooped seat doesn’t recline but rather offers options on ways to sit, whether cross-legged or with feet elevated. There is also the option to lie flat. After takeoff, passengers can adjust different panels, including an option for shared dining space.

Emirates also announced a plan to upgrade the interior cabins of 120 Airbus A380 and Boeing 777 aircraft, including the seating. The multibillion-dollar project officially commences in November. The target is to completely retrofit four Emirates aircraft every month over the span of two years. With a completion date of April 2025, the project will install nearly 4,000 new premium-economy seats, refurbish 728 first-class suites, and upgrade more than 5,000 business- class seats to a new design. The premium-economy seats, which began rolling out in June, feature wood panels, and each seat offers six-way adjustable headrests, as well as calf rests and footrests.

In 2021 Singapore Airlines launched new economy and business class cabins on its Boeing 737-8 fleet. The aircraft’s 10 lie-flat business-class seats, created by London-based Factorydesign and built by Thompson Aero Seating, measure a generous 22 inches in width and can recline into a full-flat bed.

Qantas announced in May it is purchasing a dozen new ultra-long- range Airbus A350-1000 aircraft to service the world’s longest flights, including Sydney or Melbourne to New York and Sydney to London. The plane will feature 238 seats in an aircraft designed for more than 350 seats, and its coach seats will offer 34 inches of pitch (the distance from seat back to seat back). As a reference, many U.S. airlines’ coach seats offer much less pitch — 17–18 inches — on domestic routes. The Qantas business-class seats will offer doors.

According to airline consultant McCartney, U.S. airlines made a big push to upgrade business-class seats like United’s Polaris product, and more airlines provide suites, including JetBlue’s Mint, which features the longest fully lie-flat seats on a domestic premium flight.

“The history is that international airlines had really nice business- class products and the U.S. airlines really didn’t, and so, in alliances, savvy travelers would book on the foreign airlines to get better service,” McCartney said. But U.S. airlines have been improving premium and business-class products. 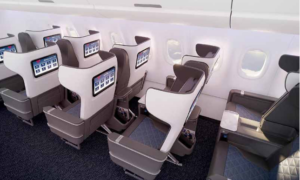 This year’s edition of the Crystal Cabin Awards also revealed an emphasis on reducing the environmental impact of aviation by using lightweight and sustainable materials, including seats.

“The changes we’ve seen in recent years have really been remarkable,” McCartney said. “The problem for travelers is that when you use thinner materials for seats, you create extra room, so did that go to the traveler, or did it go to the airline? The answer is that it went to the airline,” he noted, as airlines were able to squeeze in more seats.

McCartney said the tighter seating arrangements in coach started after 9/11 and the financial crisis of 2008, as the consolidation in the industry created a push to increase seat density. As an example, he noted American Airlines used to fly the Boeing 737-800 with 145 seats, and now the capacity is 172 people.

The FAA began a regulatory review process that could lead to establishing both size standards for commercial aircraft seats and standards for space between rows. In 2018 Congress directed the FAA to issue rules for minimum dimensions for passenger seats that are necessary for passenger safety.

In January 2022 consumer group FlyersRights and its founder and president, Paul Hudson, filed a petition to order the FAA to promptly begin a rule-making process to establish minimum seat width and pitch standards and to issue final rules by a certain date. The FAA this summer opened a 90-day window for public comments.

Hudson said in a statement, “Seats have continued to shrink by some airlines, and people are continuing to get larger. Our estimate is that only 20 percent of the population can reasonably fit in these seats now. It’s beyond a matter of comfort or even emergency evacuation; there are serious health and safety issues when you’re put in cramped conditions for hours on end.”

There is hope, according to McCartney. “The one airplane that has real promise for comfortable seating is a smaller one — Airbus A220. That’s a nice roomy cabin, and I think that’s a good sign for future airplane development. But to really have improvements in coach seating, it’s going to take manufacturers coming up with new airplanes.”