MEDIEVAL BRIDGES, sky-kissing spires and some of the cheapest beer in Europe are just a few distinct details that make Prague a fanciful playground come nightfall. The Czech capital was once considered the (unofficial) Paris of Eastern Europe, but recently Prague has come into its own, drawing hordes to its cobblestone streets, underground pubs and unparalleled character.

The affordability of the city’s entertainment makes it easy to stretch a few Czech korunas for a hearty meal and a handful of Pilsner Urquell beers. Begin an enchanting evening in Prague’s Old Town (Stare Mesto) where the main square sizzles with activity at all hours. Fill up on a plate of dumplings and traditional Czech sausage (talián), washed down with $2 beers at Pub U Zeleného Stromu, a Bohemian restaurant with a floral patio garden. 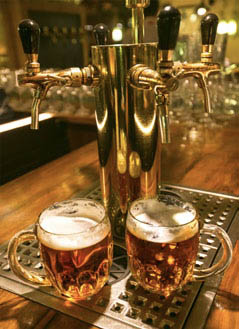 For a more sophisticated sit-down supper, head a few blocks west to Bellevue, a French fine-dining spot with views of the Vltava River. Post-dinner coffee (or cocktails) can be found down the street at the LGBTQ hot spot Q Café. A rousing night begins at the one and only Chapeau Rouge, a three-story bar with live music, DJs and enough dancing to last through the night.

Stroll to the opposite side of the Vltava River by way of the 14th-century Charles Bridge, a spectacle in itself that begins and ends with arched gateways and is flanked by saintly statues. The hilltop Prague Castle, an eminent staple in Prague’s pristine skyline, notably marks the west side of the river. Downhill toward the river lies Prague’s Little Quarter, or Malá Strana, a Baroque heaven where the Lennon Wall and grass-covered Petrin Hill reside. Once a haven for German immigrants, the neighborhood is home to Prague’s largest beer hall, Baráčnická rychta.

Cap off the night with the best of both worlds: beers and baths. Prague’s love for beer extends to all areas of the service industry, even within the walls of the city’s spas. Old Town’s Bernard Beer Spa maintains a centuries-old tradition of soaking in beer-filled barrel tubs, providing multiple benefits for body and mind. Hop oils help open pores, facilitate circulation and moisturize the hair and skin, a welcome indulgence after an evening of gluttony.