One of the moments I’d most looked forward to on my recent trip to London was dinner at this acclaimed restaurant. Having spent some time in Thailand, I’m just a little jaded about the offerings from Thai restaurants outside of the country — but my experience at Nipa Thai was culinary déjà vu, and others seem to agree: The restaurant holds the Thai Select Award, an honor bestowed by the Thai Government for authenticity. 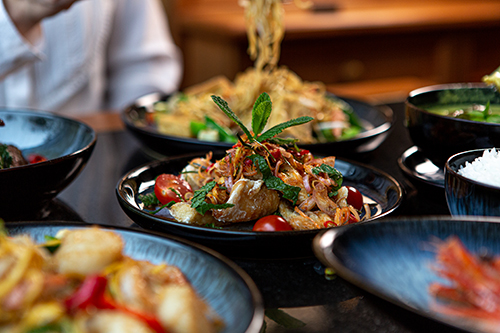 This genuineness is due in large part to the all-women kitchen team, all of whom hail from Thailand. Head Chef Sanguan Parr, who leads the team, learned the skills of ingredient selection, cooking and seasoning as a young woman while helping her mother prepare meals. Menu highlights include traditional Pad Thai, which ranks as one of Chef Parr’s favorite dishes to prepare.

I dined with my husband during my visit, and we chose two starters to share: Phoo Nim, soft-shell crabs deep fried with white pepper and salt; and Tod Mun Pla, fish cakes served with sweet chili sauce and a blend of cucumber relish and toasted peanuts. 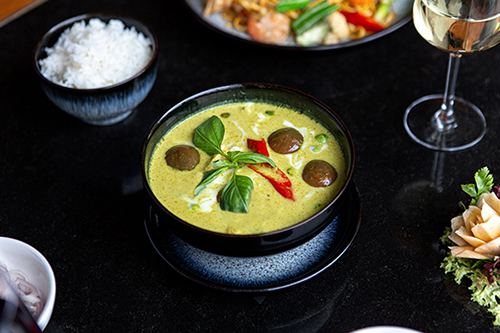 If you’re sensitive to spice, pay close attention to the little red pepper symbol found next to each dish description on the menu. My no-pepper main course of Koong Tod Kra Tiem Prig Tai (prawns stir-fried with pepper, coriander and crispy fried garlic) was an enjoyable two-plus on my uber-sensitive, personal spice scale, while my husband’s double-pepper Pla Phad Char (fried sea bass with Thai aubergine, lemongrass, red chili, lime, sweet basil and peppercorns) was, for me, a solid eight. I couldn’t help but sample it, as my own meal was so delicious — and despite the dish’s slightly fiery aspects, I found myself reaching for a second taste.

The menu also offers a selection of vegetarian dishes, as well as set, multicourse meals named after cities in Thailand. Located above the hotel’s lobby level, the restaurant is a visually relaxing setting with a décor of rich tones and wood accents. In Thai, Nipa translates to “shining light,” and the combination of exceptional food, great atmosphere and outstanding service add up to exactly that.