CASUALLY ASK SOMEONE in Minnesota’s Twin Cities what’s new, and you may be in for a longer conversation than you anticipated.

Minneapolis, larger than its twin sister city, Saint Paul, is in the midst of “The Minneapolis Big Build,” a series of projects including new facilities, green spaces and public amenities totaling $2 billion in investment. Who will benefit from this massive transformation? Everyone and anyone who lives, works, visits and plays in the vibrant city.

With the upcoming X Games in July 2017 and 2018, Super Bowl LII in 2018 and the NCAA Men’s Basketball Final Four in 2019 — not to mention home teams Minnesota Vikings, Twins, Timberwolves, Lynx and Wild — one could safely say sports play a major role in life in Minneapolis.

While the MLB Twins play at Target Field and the Wild play at the Xcel Energy Center in nearby Saint Paul, the NBA Timberwolves’ and WNBA Lynx’s home, the Target Center, is undergoing major renovations to enhance the fans’ experiences, including a new atrium and lobby; a new scoreboard, the largest center-hung scoreboard in the Upper Midwest; a renovated suite level; and new seats.

The biggest news on Minneapolis’ sports front, however, may be the brand-new U.S. Bank Stadium, nearly twice the size of its predecessor, the Metrodome, and home field for the NFL Vikings, who played their first regular season home game in the stadium in September 2016. The 1.75-million-square-foot, state-of-the-art facility is more than a sports field, however. Inside, its suite levels and public spaces are available for special events and executive meetings … even weddings. Minneapolis’ and the entire state’s creativity is evident within the stadium as well, with walls adorned with more than 500 pieces of original, curated artwork and photographs, all created by Minnesotans.

Speaking of art, the city’s Walker Art Center recently enhanced its visitor experience with its new Esker Grove, a spot to relax and enjoy a cocktail, lunch or dinner, or perhaps even weekend brunch. Esker Grove overlooks the Minneapolis Sculpture Garden, now undergoing extensive renovations to include an additional 16 new pieces of art and expected to reopen this summer.

Outside of town, Prince’s Paisley Park opened to the public in October 2016, six months after the star’s passing. Fans of his music will certainly want to tour his private home and recording studios for a look into his heavily guarded private life.

Back in downtown Minneapolis, a complete rebuild at Nicollet Mall, the city’s main street for shopping and dining, will enhance its pedestrian area, lighting and art spaces. Phases of the one-mile-long project are anticipated to open this year and next. 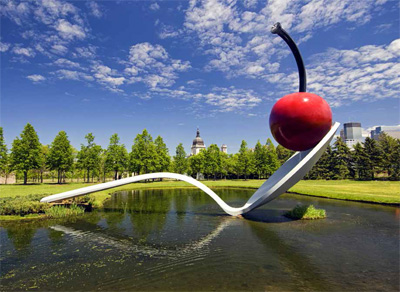 Minneapolis’ fastest-growing neighborhood, the North Loop, bursts with new restaurants and shops. Development booms across the Mississippi River, too, in Northeast Minneapolis. In fact, you may be hard-pressed to find an area of the city not seeing its own renaissance in some way.

With all of the city’s development and redevelopment, it comes as no surprise the Minneapolis hotel scene swells with construction — 1,500 new rooms in 10 hotel properties have recently opened or will be soon.

Foley went on to say Radisson RED encourages a DIY-type hotel stay, and the brand wants guests to enjoy an experience, not just sleep.

Visitors can find boutique hotels in Minneapolis as well, such as Hotel Alma, opened in December 2016 across the Mississippi River from downtown Minneapolis in Marcy-Holmes, the city’s first neighborhood. The seven-room hotel, more like an inn, complements James Beard Award-winning chef Alex Robert’s Restaurant Alma and new Café Alma downstairs, all housed within the same recently renovated building.

Minneapolis has taken great care in identifying and designing projects and initiatives that will make the city an even more inviting destination for families, professionals and visitors to live, work and play, and make it even easier to say, “Make mine Minneapolis.”

From downtown Minneapolis, head east through its Twin City, Saint Paul, and toward the St. Croix Valley along the St. Croix Scenic Byway. The nearly 124-mile drive will take about two and a half hours each way, leaving behind the development and growth of the cities. Instead, in the valley you’ll find rolling landscapes through some of Minnesota’s oldest settlements, each with its own history, culture and beauty. Take time to stop at Afton State Park, Banning State Park and Brook Park State Monument to enjoy the area’s natural beauty before returning to the buzz and bright lights in the city.