HOW LONG HAS SINGAPORE BEEN the world’s top MICE destination? Since 1819, you could argue. That year Sir Stamford Raffles, an English civil servant, arrived on this island off the southern tip of the Malay Peninsula and recognized its potential as a center for trade and commerce. A treaty was signed with the ruling sultan, and the city-state of Singapore was born.

Until then, the island had been a neglected backwater, covered in jungle and fringed with swamp. By thinking big, Raffles was able to make the most of the island’s strategic position at the head of the Strait of Malacca. All trade between the Far East and Europe had to pass within sight. The new trading post tapped into it.

To this day, Singapore continues to make the most of its location. Changi International Airport, often voted the world’s best, is a busy transit hub. A determined effort has been made to convert transit passengers into stopover tourists. The average tourist stay in Singapore is three days. But Singapore also flourishes as a destination in its own right, with MICE leading the way. This ultra-clean, ultra-efficient, ultra-modern city makes the perfect venue, offering a host of world-class MICE facilities.

One of these, appropriately, commemorates Singapore’s founder. The Raffles City Convention Centre, situated on the fourth floor of the Raffles City hotel and shopping complex, offers 70,000 square feet of flexible function space, ranging from theaters and ballrooms to small-scale boardrooms. The famous Raffles Hotel (under different management) sits directly across the street. 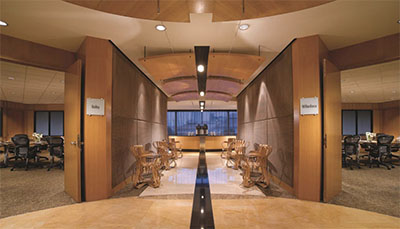 Suntec Singapore Convention & Exhibition Centre, a couple of blocks from Raffles City, underwent extensive refurbishment in 2013. It offers a column-free main hall capable of handling up to 10,000 delegates; a 596-seat theater; and 31 meeting rooms. The convention center is the showpiece of a huge downtown development that includes 5,200 hotel rooms; 1,000 shops; and 300 restaurants. The entrance foyer is an attraction in its own right, featuring the world’s largest HD video wall.

Another established downtown venue, the Sands Expo and Convention Centre, adjoins the famous three-towered, 2,561-room Marina Bay Sands Hotel (location of a much-photographed rooftop infinity pool straddling the three towers 626 feet above the city). The Sands Expo Centre boasts nearly 400,000 square feet of meeting space and a total of 250 meeting rooms. The Centre is within walking distance of the Singapore Flyer, the world’s second-highest Ferris wheel, and also the popular Gardens by the Bay botanical park.

Singapore EXPO Convention and Exhibition Centre, close to Changi Airport, offers the country’s largest venue and received the global industry’s Best International Venue Award in 2016. The main EXPO building features nine large halls which can be combined to provide an exhibition area of nearly 1 million square feet. The adjoining Max Atria provides a versatile range of smaller rooms and spaces. The Centre is one metro stop from the airport and a 15-minute drive from downtown.

Nowhere is far from anywhere else in Singapore, yet one of the offshore islands offers a change of scenery and pace, even though it is readily accessed by bridge and monorail. Sentosa Island is Singapore’s playground. Just over a mile long, it packs plenty of fun into its small area. The flagship attraction, Resorts World, includes a Universal Studios theme park, a water park and an aquarium. Unsurprisingly, it is amply equipped for MICE, with a convention space accommodating up to 6,000 people; several smaller rooms; and an incentive program geared for groups of 10–15.

The business world often feels like a zoo. Well, it is here, literally. A complex of wildlife attractions amid the lush jungle of the island’s interior proves one of Singapore’s best corporate venues. Collectively run by Wildlife Reserves Singapore, it consists of Singapore Zoo, Jurong Bird Park, Night Safari and River Safari. The complex offers 25 corporate venues, both indoors and outdoors, catering to groups from 15 to 15,000.

The zoo, founded in 1973 and with more than 300 species on exhibit (including the world’s largest captive colony of orangutans), has firmly established itself as one of Singapore’s most popular attractions, receiving more than 1.7 million visitors each year. Tailor-made corporate events include conferences and meetings, product launches, team-building retreats and company parties. Whatever the event, it will take place in an immersive environment, with the sounds of exotic animals providing the atmospheric backdrop. It’s a jungle out there.
wrs.com.sg

A more recent green attraction has leapfrogged the zoo to become Singapore’s most visited site. Gardens by the Bay, a spectacular botanical garden close to downtown, is dominated by futuristic manmade supertrees — instantly a Singapore icon. The Gardens offer several corporate venues, most notably Silver Leaf, an outdoor lakeside location beneath the magical supertrees.
gardensbythebay.com.sg