SANTIAGO, CHILE: This part of the world simply has an air of remoteness. The next closest capital, Buenos Aires, lies more than 900 miles away. Santiago itself is merely 70 miles from the Pacific Ocean, before the continent ends and you’re heading to New Zealand.

The point is, not to belabor it, but Santiago is most likely far from wherever you’re coming from. But if you’ve traveled to Western Europe, there’s an air of familiarity to the Chilean capital: You’ll find a city easy to navigate by foot, and you’ll often be surrounded by impressive architecture, markets and the occasional pedestrian-only thoroughfare.

Best of all for the business traveler, Santiago upped the ante over the past decade with substantial investments in transportation and hotel infrastructure to make the trip more than worthwhile. The Santiago Convention Bureau chalks up 11,500 rooms spread out among 3- to 5-star hotels. By 2018 it estimates 13,800 rooms will be available in the city to complement 355,000 square feet of meeting and exhibition areas.

Comodoro Arturo Merino Benítez International Airport (or, as you’ll stick with, Santiago International Airport) serves as the long-haul hub into the Chilean capital, with a number of international direct connections and 20 national and international airlines serving 16 million annual passengers. In fact, this year British Airways launched its first direct flight from London Heathrow to Santiago — a nearly 15-hour journey that makes it the airline’s longest route. Luckily for travelers coming from far and wide, it’s not much farther into the city center — only about 18 minutes with a cab or Uber, setting you back just $18.

The appeal of Santiago as a business destination is something the country’s North American counterparts noticed for some time. After all, business travelers from the United States have made the most trips to Santiago for conventions and conferences, averaging seven nights and spending approximately $1,236 per traveler.

Of course, the city is also a regional draw. This past June, Santiago hosted FIEXPO (The Latin American & Caribbean Meetings and Incentives Exhibition), attracting more than 16 Latin American countries into the city. Santiago will remain the host until 2019.

FIEXPO is held at CasaPiedra on the northeastern edge of the city. CasaPiedra features rooms with different dimensions and characteristics, with a Gran Salón serving as the anchor. Spaces in this room can expand from 322 to nearly 16,000 square feet to allow for an incredible spectrum of possibilities from small, private events to large-scale shows.

This boom in convention business brought new investments in lodging infrastructure. Over the past three years, the city saw $240 million spent on 18 new hotels. This is on top of the sensational growth of the past decade, when prestigious chains like Hilton, Holiday Inn and Marriott came into the country. As of August, Santiago is the first city in all of South America to have a Mandarin Oriental hotel. 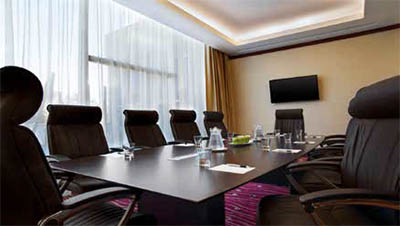 Sheraton Santiago Hotel and Convention Center, the country’s largest hotel meeting facility, provides another popular option, with 386 guestrooms and 15 meeting spaces, the largest of which measures 7,500 square feet. The Sheraton advertises a capacity of up to 1,500 or more.

In other words, Santiago is well-prepared to handle your MICE needs.

Casa Almarza, a mid-19th-century mansion, sits just south of Parque de los Reyes along the Mapocho River in the Balmaceda neighborhood. Ownership changed hands several times throughout the century, and the passing time took its toll on the property, leaving it in a deplorable state by the end of the millennium. Jaime Almarza Daydi acquired the mansion with the mission to save and restore it. That mission was accomplished thanks to a private initiative that sought to preserve the architectural style while enhancing original elements.

Club Militar hosts a number of events, from wedding ceremonies and baptisms to seminars and business conferences. Rooms are available to welcome a variety of crowd sizes from 10 to 450, including garden and pool venues. The restaurant boasts a diverse menu, blending Chilean national favorites with international cuisine.

It’s been more than a century since a group of Spaniards found what remains today as Círculo Español de Santiago. The group of Spaniards first met to aid victims of a flood in Murcia and shortly thereafter started the institution. No surprise, a palpable Spanish flair welcomes everyone from government dignitaries to the average citizen.