IN THE YEAR 381, WHEN A GLOBAL COUNCIL of Christian bishops convened, there was only one logical place for them to meet. From all corners of the Christian world they converged on Constantinople (now İstanbul) in what could be regarded as one of the world’s first MICE events.

For millennia, this city represented the geographical center of the human world. Situated on both banks of the Bosporus, the channel that links the Black Sea to the Mediterranean, the city straddles the continental divide between Europe and Asia and stands as a crucial staging post between Northern and Eastern Europe and all points south.

Through the rise and fall of empires, through the shift from Christianity to Islam and through a change of name, İstanbul’s strategic importance remained constant. With the advent of the modern MICE sector, the city instantly established itself as a major destination.

İstanbul’s claim to be the crossroads of the world was reaffirmed this year with the opening of the new Istanbul International Airport, 21 miles northwest of downtown. With an annual capacity of 150 million passengers, it is intended to become one of the world’s busiest aviation hubs. 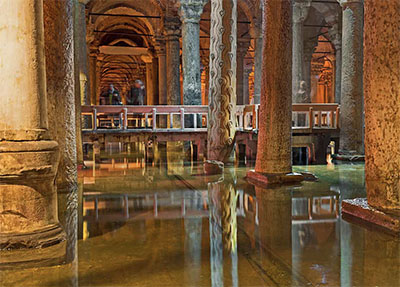 İstanbul boasts a wealth of state-of-the-art MICE venues. By far the largest is CNR EXPO, close to the old Ataturk International Airport (slated for closure once the new airport is up and running). This large facility, with eight exhibition halls totaling more than 1.6 million square feet, will continue to benefit from the Metro and other transport links established to serve the soon-to-be-defunct airport. Three additional halls in the complex are operated by World Trade Center Istanbul.

Downtown, the seven-story Istanbul Congress Center, or ICC, situated a short walk from the central Taksim Square, offers 115 fully equipped meeting rooms; nine meeting halls with capacity of up to 1,300; and an auditorium that can seat 3,705 people.

Next door to the ICC, the Lütfi Kirdar Convention and Exhibition Center, known as ICEC, includes 45 versatile meeting rooms; a 2,000-seat auditorium; and magnificent views from its hillside location down to the Bosporus.

The Haliç Congress Center is picturesquely located beside the Golden Horn, the estuary that divides the European side of İstanbul in two. Although slightly off the beaten path with regard to tram and metro links, visitors can easily reach the center by bus or taxi and, uniquely among the major venues, also by ferry (the adjacent Sütlüce ferry stop is part of the city’s busy ferry network). The center comprises several buildings, each boasting auditoriums and meeting rooms. The Erguvan Restaurant, overlooking the water, can accommodate up to 200 guests.

As you would expect of a major international city, İstanbul is well-served by high-end international hotel chains, many of which cater to the MICE sector. The Grand Hyatt Istanbul, located downtown close to Taksim Square, offers 21,000 square feet of flexible meeting and event space. The nearby Ritz-Carlton features similarly flexible event space (with panoramic views of the Bosporus) and provides a “Technology Butler” to ensure everything runs smoothly.

The city boasts two Four Seasons hotels. The one in the historic Sultanahmet district proves an ideal incentive base for visits to such iconic attractions as the Topkapi Palace and the Hagia Sophia, while the other, occupying a larger site on the Bosporus shore, has a range of halls and rooms for meetings and events. From the hotel’s waterside terrace you can watch the comings and goings on the busy waterway — a reminder İstanbul has always been, and continues to be, one of the world’s great meeting places.

On the surface and beneath, the Romans, the Byzantines and the Ottomans all left their mark on İstanbul. The great Byzantine cathedral, Hagia Sophia, proves the ultimate example. Originally built in the sixth century, it was turned into a mosque in the 15th century and converted into a museum in 1935. In the shadow of this great building sits one of the city’s more unusual venues, a 16th-century bathhouse, the Ayasofya Hürrem Sultan Hamami. Small groups can enjoy bath and massage packages followed by a meal in the atmospheric courtyard restaurant (please note the bathhouse itself is segregated into male and female sections).
ayasofyahamami.com

The Sait Halim Pasha Mansion, an ornate Ottoman palace on the European waterside of the Bosporus, offers a prestigious venue for weddings and corporate events. With 13 function areas, the mansion can accommodate small groups or cocktail parties of up to 1,600 guests.
saithalimpasa.com

Among İstanbul’s great subterranean attractions are its Byzantine cisterns — underground reservoirs — dating back to the fourth century. The Basilica Cistern is the largest and most famous, a must-see visitor attraction. The second-biggest, now known as the 1001 Direk Cistern, has been drained of water, subtly modernized and transformed into a characterful venue capable of hosting up to 3,000 people.
yerebatansarnici.com icvb.org.tr/venue/1001-direk-cistern

Sofitel Rome Villa Borghese invites art lovers to step back into the Renaissance with its new Caravaggio Experience. The experience entails a complete immersion into the work and life of Michelangelo Merisi da Caravaggio, the iconic Renaissance painter.

If you’re a fan of adventure travel and luxury cars, Off the Map Travel has an experience for you. The new Drive the Fjords tour allows travelers to explore the Norwegian fjords and Sunnmore Alps in style in an electric Porsche Taycan Cross Turismo.