Island Time in the Cayman Islands

OVER THE YEARS, the Cayman Islands made headlines for being tax havens for celebrities, politicians and business magnates. However, these coral outcrops, consisting of Grand Cayman, Cayman Brac and Little Cayman, have other valuable assets, including superb snorkeling, average year-round temperatures of 75–80 degrees and miles of sugar-white beaches spilling into aquamarine waters.

Most visitors fly to Grand Cayman, the largest of the islands and where most of the Caymans’ 100,000-plus companies are registered. For nearly four decades, the islands have enjoyed unprecedented economic prosperity due to their strong financial services and banking industries. Much of the islands’ wealth comes from offshore services and a neutral tax status; the most popular offshore banks include the First Caribbean International Bank, Fidelity and RBC Wealth Management.

Since it’s likely you’ll be doing business on Grand Cayman, make it your base for business and pleasure. Many of the island’s top properties sit along Seven Mile Beach, considered one of the world’s prettiest stretches of white coral sand. The Ritz-Carlton, Grand Cayman, for one, delivers luxury and elegance at every turn. It offers gorgeously appointed rooms and suites overlooking the water, tented beachside cabanas, two outdoor pools and La Prairie Spa. It also offers the nine-hole Ritz-Carlton Golf Club, Grand Cayman, and its multiple bars and restaurants include Blue by famed Manhattan chef Eric Ripert, where you can savor spicy conch with cucumber and quinoa and butter-poached trout in tomato broth.

Also set along Seven Mile Beach, consider the newly opened Kimpton Seafire Resort + Spa, a cool, design-forward hotel with funky furniture and bright pops of color. Think hot pink pillows in the rooms and suites; splashy blue, gray and white fabrics in common areas; and poppy-red lounge chairs by the pool. For the ultimate in privacy, reserve one of the hotel’s beachfront bungalows, steps from the sand and nestled among tropical swimming pools. In terms of dining, the hotel offers multiple venues both indoors and out with options ranging from avocado-melon gazpacho and seafood curry at Ave to the Spanish- and island-inspired Chef ’s Counter menu at Avecita. The 8,500-square-foot aquatic-themed spa features a generous selection of treatments for men and women. 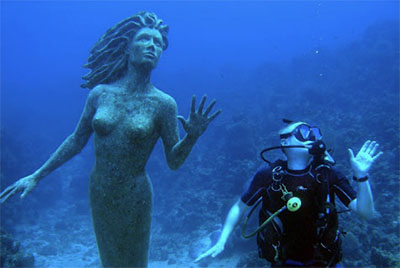 The Cayman Islands comprise part of an underground mountain chain between Cuba and Belize, and their robust coral reefs teem with colorful marine life. When business ends, consider exploring the reefs with your partner. Most hotels offer a bounty of daytrips and tours, including snorkeling and scuba diving excursions. Whether you’re a seasoned or first-time diver, you can book an outing with the island’s popular dive companies such as Divetech, Off the Wall Divers and Red Sail Sports.

At popular Stingray City you can swim with gentle stingrays in the area’s shallow, warm waters; and at Cayman Turtle Centre in the West Bay, see 11,000 green sea turtles ranging in size from 6 ounces to 100 pounds. The farm also has a massive saltwater lagoon for snorkeling, along with an aviary and predator tank full of toothy sharks and eels.

See native plants and flowers at Queen Elizabeth II Botanic Park. The Caymans are a British Oversees Territory, and this beautiful sanctuary was built in the Queen’s honor in 1994. You also can spy various birds drawn to the park’s two-acre lake, as well as the famed blue iguana, an endangered species protected by law and only found on Grand Cayman. 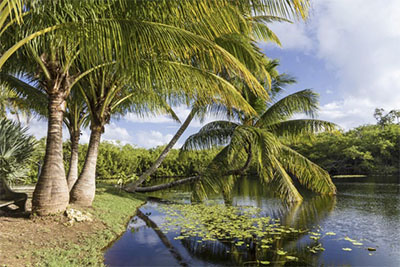 With such a large business population, Grand Cayman boasts a lively restaurant scene, ranging from casual fish shacks to white-cloth wonders. The Brasserie has its own fishing boat and kitchen garden and earned a reputation for its luscious, hyper-local dishes such as Cayman crab-mango salad with crispy local plantain and chicken confit with a soft egg, native greens and pumpkin. Instead of choosing from the menu, you can put yourself in the kitchen’s hands and go for the Random Acts of Cooking Chef ’s Tasting Menu — five courses (with or without a wine pairing) of whatever the island’s gardens and waters released that day.

If time permits, consider hopping a flight to Cayman Brac or Little Cayman. Cayman Airways serves both islands from Grand Cayman and tends to be the airline of choice for most visitors. Cayman Brac, 89 miles northeast of Grand Cayman, sports a dramatic limestone bluff running the length of the 12-mile-long island. In addition to quiet beaches, it has great hiking, hidden caves to explore and restaurants for lunch including Coral Island Restaurant serving simple, well-prepared Caribbean food.

Little Cayman, five miles west of Cayman Brac, measures only 10 miles long. Most visitors come to the island to dive at Bloody Bay Marine Park, although Little Cayman’s pristine beaches, privacy and serene atmosphere appeal to those eager to unplug and get away from it all.

Indeed, just going to the Cayman Islands will put you in an island frame of mind. Add in some leisure time, and it might be hard to pack up and go home.

Where to Stay in the Cayman Islands

Restaurants in the Cayman Islands

CATCH It’s all about seafood at this comfy yet sophisticated waterfront restaurant where crudo and ceviche cozy up to bouillabaisse and grilled catch of the day. It serves meat and poultry, too. Morgan’s Lane West Bay, West Bay, Grand Cayman $$$$

DECKERS Jerked, grilled, blackened and crusted are the culinary buzzwords at this hopping spot, where a real English double-decker bus sits near the bar, the cocktails are strong and seafood is plucked from the waters. West Bay Road, Seven Mile Beach, Grand Cayman $$$$