THERE IS SOMETHING THEATRICAL about Doha’s Corniche. Curving for almost five miles around Doha Bay, this paved walkway provides pedestrians with a prime view of the lapping Arabian Gulf. Beyond the constant flow of vehicles on the other side, an ever-rising forest of skyscrapers grows. At night it is magical: Qatar’s capital city becomes a constellation of multicolored lights glitteringly reflected on the water.

Doha’s rapid transformation into a modern city has been more cultured, less brash than its regional rival Dubai. Yet this is a city with unbridled ambition, and the MICE sector is central to its plans.

The biggest event on the horizon — the 2022 FIFA World Cup — precipitated a frenzy of construction work. The main stadium is currently being completed in a brandnew city, Lusail, 14 miles north of downtown Doha, while four other stadiums will be in Doha itself.

Controversially, the World Cup shifted from its traditional June/July time slot to November/December in order to avoid Qatar’s ferocious summer heat. The climate is something MICE planners need to consider. From May to August, temperatures often exceed 100 degrees Fahrenheit, with high humidity.

Most of Doha’s venues are designed to keep the hostile climate at bay. The flagship facility, the Qatar National Convention Centre, turns the sun to its advantage. A vast acreage of rooftop solar panels supplies the Centre with around 12 percent of its energy needs.

Although business and media events feature on Doha’s MICE calendar, the city has a particular love of sport and boasts world-class facilities to match. The Aspire Academy for Sports Excellence at Aspire Zone (aka Doha Sports City) can accommodate events or incentive visits centered on a wide range of sports including soccer, basketball, athletics, cycling and tennis. The Aspire Zone itself is a large complex offering a plethora of MICE services and boasting two 5-star on-site hotels, the Torch Doha and the Al Aziziyah Boutique Hotel (with its oddly Victorian façade).

Msheireb Enrichment Centre is a floating exhibition space moored close to the Sheraton Hotel on the Corniche. Featuring permanent displays portraying Doha past and future, the Centre doubles as a state-of-the-art conference venue for small groups. 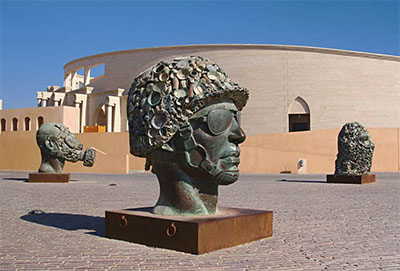 With the World Cup on its way and a constant roster of major events in the meantime, it would appear Doha’s place on the international stage is secure. However, an ongoing diplomatic dispute with neighboring countries (notably Saudi Arabia and the United Arab Emirates) has had a logistical impact, restricting transport and communications links and affecting imports of food and other essentials. MICE visitors should be aware of the potential for unforeseen disruption.

Despite the rumbling crisis, Doha continues to enjoy a MICE boom, with an annual growth rate of 36 percent over the past five years. Rising above the many competing MICE venues around the world, the city’s success is largely attributable to impeccable stagecraft.

UNIQUE VENUES
With the opening of the National Museum of Qatar this month, Doha gains not only a modern architectural masterpiece but also an outstanding new MICE venue. Designed by superstar architect Jean Nouvel, the building is intended to resemble a desert sand rose, with dozens of interlocking “petals.”

As is so often with prestige projects, the popular gripes during construction were the cost (nearly half a billion dollars) and delays (the opening date is two years behind schedule). But now that it is complete, Doha can celebrate its possession of one of the world’s greatest modern buildings.

Within its 13 acres, the museum features permanent exhibits celebrating Qatar’s history and seafaring heritage. In addition, a 220-seat auditorium and a 70-seat forum are available for MICE events, while other spaces both inside the museum and in its gardens provide spectacular backdrops for meetings and conferences.
qm.org.qa/en/project/national-museum-qatar