Magical Paradise of the Maldives

For most of the world, imagining paradise requires closed eyes and an active imagination, but on the island chain of the Maldives, it’s as simple as opening your eyes to the tranquil scene that surrounds you.

Located off the southern tip of India, just west of Sri Lanka, the Republic of the Maldives appears on the map as a handful of unstrung pearls scattered about the Indian Ocean. In reality, the country consists of more than 1,190 islands on a coral-formed archipelago stretching all the way to the equator.

There’s an unmistakable postcard quality to the Maldives, where the waters surrounding the islands shimmer in an ethereal shade of sapphire and the powder-soft sands appear as white as snow. Like most tropical destinations, the seasons range from wet to dry, but like the consistent beauty of the islands, the temperature here also remains predictable, averaging between 77 and 84 degrees Fahrenheit throughout the year.

The Maldives became famous as a honeymoon destination where couples from around the world come to withdraw for a week of romance in the private bungalows that hover only inches above the teeming marine life below on the series of resort-owned private islands. But in recent years the increased number of flights from destinations like Dubai and Sri Lanka has made it possible for islands to welcome more families, solo travelers and even business professionals looking to kick back after a week of business calls and corporate meetings.

Tourism is a relatively new development in the Maldives, where the first resort appeared in 1972 on the island of Kurumba. Today only 187 of the islands are occupied by the country’s roughly 341,000 residents — giving the Maldives one of the world’s most geographically dispersed populations — and the rest either remain virgin islands or have been developed by the more than 100 resorts that operate as individual private islands. 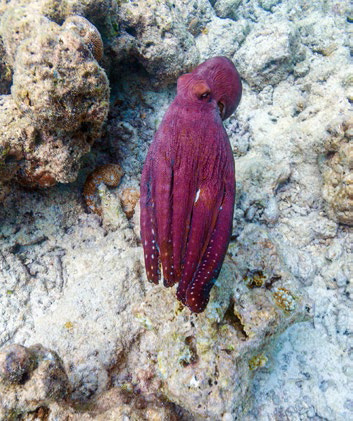 A red octopus in the Maldives © ROSTISLAV AGEEV | DREAMSTIME.COM

Although some of the islands are no bigger than the width of a hammock, each one plays a vital role in making up the unique culture and ambience for the 26 natural ring-shaped reefs (or atolls) that divide the country. Of those 1,190 islands, only four contain international airports, the largest of which is Ibrahim Nasir International Airport, commonly referred to as Malé International Airport, located on Hulhulé Island.

The airport lies a short, 10-minute boat ride from the island of Malé, where you can explore the cultural center of the Maldives through quick visits to the Islamic Centre (free to visitors outside of prayer times) or the Sultan Park and National Museum. The majority of the Maldivian population lives in this capital city, where Sunni Muslim law prohibits drinking alcohol and eating pork. The resorts are the exception to these religious bans, and most visitors bypass the densely populated capital city altogether and head straight to one of the private resort islands directly from the airport.

Unlike other beach destinations, the Maldives operates almost exclusively as a series of private luxury retreats, with each island offering its own exclusive experience for its guests. Choosing an island to visit requires simply choosing a resort, and prices range from ultra-luxury to budget apartment rentals. Island hopping isn’t the norm here, as getting to each island is itself part of the Maldivian experience. The islands are only accessible by domestic airlines, seaplanes, ferryboats, speedboats or, on the rare occasion, authentic Maldivian dhoni boats.

From the airport, resort shuttle boats and private planes sit ready to whisk guests off to their private retreats for a holiday spent snorkeling among the more than 2,000 species of tropical fish in the coral reef, scuba diving with whale sharks or just lounging luxuriously on secluded sandy beaches. Some islands are known for their high-end offerings, like name-brand spa services and luxury accommodations, while others gear more toward active holidays with room to explore the island or famous diving sites nearby. 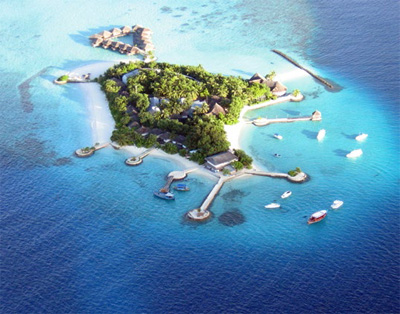 On the island of Bolifushi, vacationers don’t have to choose between luxury and adventure. Located just 20 minutes by speedboat from Malé Airport, the island houses the Jumeirah Vittaveli Resort as well as one of the country’s best coral reefs for snorkeling and five shipwrecks within 300 feet. The Vittaveli Resort — the newer of the two Maldivian properties owned by Jumeirah — is every bit as luxurious as one would expect from the U.A.E. hotel group behind the world-famous Burj al Arab in Dubai.

The word vittaveli translates to “vastness of space” and “eternal light” — a name that sets the bar high in a country where both of those elements are considered precious commodities. However, the resort lives up to its name with ample space to explore the island either by bike or by foot, and an unmistakable radiance emanates from everything from the local workers to the star-worthy restaurants such as the overwater restaurant Fenesse or the private Aqua Dinners enjoyed by candlelight. 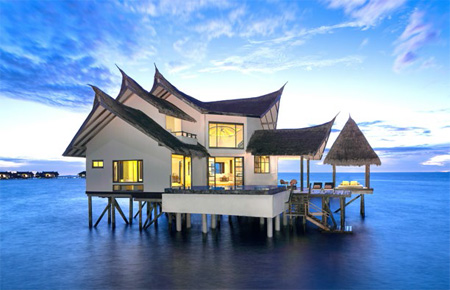 The Vittaveli offers 89 spacious villas and suites (each with its own private swimming pool and beach/lagoon access) ranging from one- or two-bedroom beachfront or overwater villas to the opulent and remote ocean suites set in the middle of the ocean and featuring 24/7 boat shuttle service. The resort also includes one of the largest kids’ clubs in the country; an overwater fitness center and yoga studio; and the award-winning Talise Spa offering a range of massages, yoga therapies and specialized treatments like the Kurubaa Kaashi that uses the spa’s natural, homemade coconut oil.

During the day, most visitors take to the warm waters of the Indian Ocean. As a country comprising 99 percent water, the Maldives obviously offers some amazing opportunities to immerse oneself in the surrounding seas. Wakeboarding, sailing and paddle boarding are favorites for most visitors, but kite surfing recently gained in popularity, and more and more jet skis are surfacing in the country. Fishing trips leave regularly from the docks at the Vittaveli, taking anglers out for either a deep-sea excursion or a traditional hand-line fishing trip on a dhoni boat with a tank to keep any sizable catches of the day, which the culinary team cooks to the fisherman’s liking upon return.

The Maldives is renowned as one of the best snorkeling and scuba diving destinations in the world, with some of the planet’s most diverse marine life swimming just below many of the overwater villas. Visitors are just as likely to encounter colorful reef fish as they are reef sharks, moray eels and eagle rays. Vittaveli guests don’t need to get scuba certified before arriving, as the resort offers a 5-star PADI dive center with classes ranging from children’s entry level to rescue diver courses.

It’d be nearly impossible to find another place like the Maldives in this world, where the lifestyle is as pure as the ocean breeze and the ambience is as vibrant as the amazing sunsets that wash over the islands each night.

Malé International Airport is the main international gateway in the Maldives, located on Hulhulé Island in the North Malé Atoll. Fly Emirates from New York (JFK) to Dubai (DXB) and then continue on to Malé (MLE). From the airport, a short, 10-minute ferry ride takes you to the capital island, Malé.

Where to Stay in the Maldives

JUMEIRAH DHEVANAFUSHI Located on one of the most remote islands in the Maldives, the resort sits just feet above the equator and offers the ultimate tranquility. Meradhoo Island, Gaafu Alifu Atoll $$$$$

KURUMBA MALDIVES The first resort to open in the Maldives, the Kurumba has welcomed guests to its high-end luxury since 1972. Vihamanaafushi, North Malé Atoll $$$$$

Restaurants in the Maldives

AQUA DINNER This dining experience is prepared on demand for guests looking for an intimate dinner under the stars, set on the main pool at the Jumeirah Vittaveli. Jumeirah Vittaveli, Bolifushi Island, South Malé Atoll $$$$$

FENESSE The food may be French but the ambience is pure Maldivian as guests dine on a romantic pier over the Indian Ocean. Jumeirah Vittaveli, Bolifushi Island, South Malé Atoll $$$$

ITHAA UNDERSEA RESTAURANT The first undersea wine cellar and restaurant, this iconic dining spot remains one of the most sought-after reservations in the Maldives. Conrad Maldives Rangali Island $$$$$