EVER SINCE THE FIRST glittering marquee rose above the Strip, Las Vegas has been a legendary destination for business and leisure travel. And in more recent decades, it’s carved a reputation as a growing hot spot for LGBTQ travelers as well.

“You might think that a town called Sin City wouldn’t live up to its own hype,” said Jim Werner, co-owner, Fagabond.com, an LGBTQ travel site. “Well, Las Vegas is just as surreal as its high-reaching nickname. Cher impersonators. Pool parties. Feather boas. This is Vegas on a normal day.”

Much of the liveliest nightlife takes place along the so-called Fruit Loop, where a club called Piranha holds weekly events, including after-hours parties that start at 6 a.m., as well as VIP packages with top-shelf liquor. FreeZone, meanwhile, hosts events including talent contests and music bingo and — like many bars in Las Vegas — has gaming facilities on site. 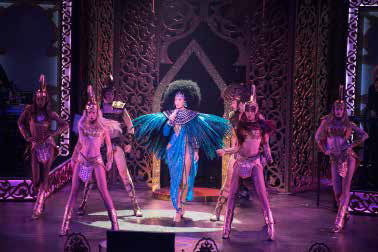 Gaming, indeed, is a big draw in Las Vegas — as is the city’s varied live entertainment. Ricky Martin, among the newest performers on the Strip, performs at the new Park Theater at Monte Carlo in April, June, July and September of this year. Other gay-popular singers appearing this year include Jennifer Lopez, Cher, Mariah Carey and Britney Spears.

Nearly every Las Vegas hotel is LGBTQ-friendly, including the MGM Grand and the Encore at Wynn Las Vegas, both members of the International Gay & Lesbian Travel Association. Also popular are the Hard Rock Hotel, especially close to the Fruit Loop, and the Luxor, which has a weekly LGBTQ pool party during the summer called Temptation Sundays.

For those tying the knot, Las Vegas ramped up a variety of same-sex destination wedding options. A company called Viva Las Vegas, for example, is among the companies offering decidedly destination-appropriate “Elvis weddings,” complete with a performing impersonator.

Top annual LGBTQ events in the city include Las Vegas Pride, which takes place in October with a night parade and festival. Sin City Shootout, billed as the largest annual LGBTQ sporting event in the world, takes place in January, attracting some 9,000 participants for 25 different sport competitions, from arm wrestling to water polo. To be sure, not every activity in Las Vegas is about “sin.” But there are certainly lots of temptations.