BERLIN HAS BEEN AN LGBTQ cultural and social hub for decades — or even centuries, if you consider Magnus Hirschfeld founded what’s described as the world’s first “homosexual advocacy group,” the Scientific Humanitarian Committee, in Berlin in 1897.

In more recent years, Germany’s capital has continued to carve out a decidedly queer-positive identity and today is one of the top destinations for LGBTQ travelers in Europe.

The reasons for the city’s appeal with LGBTQ travelers are many, according to Christian Tanzler, spokesperson, visitBerlin, the city’s tourism organization. “It’s the special ‘Berlin spirit’ you can feel in our city: the spirit of freedom and creativity, adrenaline and ‘chill out,’” he said. “The second reason that makes Berlin so interesting are the special offerings for the LGBT traveler, which are perfectly shown in the Pink Pillow initiative.” 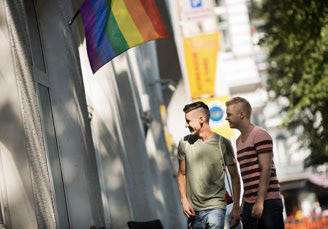 Tanzler’s advice for first-time visitors: “Come in the summer and enjoy life outside in the city, especially in the Schöneberg neighborhood.” Schöneberg, in fact, has been a mecca for gay life since the 1920s. Gay-owned businesses here include boutiques, restaurants and bookstores, and classic gay bars and pubs abound — including Café Berio, featuring tables on the sidewalk, and HarDie’s Kneipe, boasting a popular happy hour.

The younger set often heads to Kreuzberg, home to the eclectic Bergmannkiez, and Neuokölln, a countercultural hot spot where cafés and bars are among the draws. But LGBTQ residents and visitors alike can easily find plenty of activities in many neighborhoods, depending on their style and taste.

July is the biggest month on the LGBTQ calendar in Berlin. The city’s Pride Weeks span the entire month, with more than 200 cultural, political and sporting events including the Christopher Street Day Parade, Gay Night at the Zoo and the Lesbian and Gay City Festival.