IF THE REST OF THE WORLD can learn anything from Belgrade, it is that appearances can be deceiving. This Serbian city has famously been referred to over the years as “gritty” and “raw,” with one of the city’s most renowned writers even observing his hometown is “not overly beautiful.”

It’s true; on the outside Belgrade may not look like a glamorous center of commerce, having been destroyed more than 40 times since its third century B.C. inception. But look past the city’s Soviet-era construction and gritty and raw exterior, and what’s left is a vibrant, dynamic city with one of the largest and fastest-growing markets in southeast Europe. 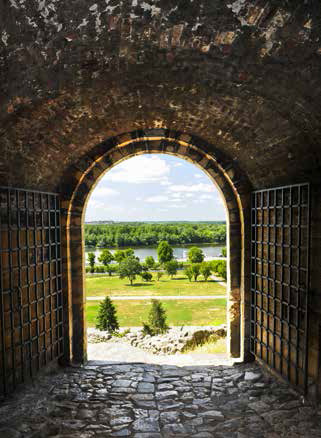 Belgrade sits in the center of the Balkan Peninsula, at the point where the Sava River meets the Danube. The city’s strategic location made it an integral point along the trading routes between eastern and western Europe, with direct linkage to the Middle East. Belgrade’s recent urban revival — coupled with its duty-free access to multiple countries and low operating, utility and labor costs — birthed a culture that now caters to the 9–5 set with world-class eateries, chic meeting spaces, extensive public transportation options and tons of trendy places for entertaining clients.

A valid passport with at least one blank page is all U.S. travelers need upon landing at Belgrade’s Nikola Tesla International Airport, where visas are only required for stays of 90 days or more. Currency restrictions begin at €10,000 (about $10,630) for both entry and exit from the country, and all visitors must register their presence within the first 24 hours of arrival. (Note: Hotels and similar accommodations like Homestay.com do this automatically for guests, but visitors staying in a private residence need to register in person at a nearby police station.)

Any visitors arriving by car to Belgrade need only make sure to enter the Serbian border by any country other than Kosovo since, as of this publishing, Serbian border officials do not recognize the authority of Kosovo’s government and will refuse entry to any visitors entering at the Serbia-Kosovo border who have not first entered Serbia’s borders at another point. The roads in Belgrade are easy to navigate, with most traffic laws resembling those in the United States, except it is illegal to turn right at a red light without an illuminated green arrow. Seat belts are mandatory for all passengers, and a driver with a blood alcohol level higher than 0.05 percent is considered intoxicated by Serbian traffic officers, who carry breathalyzers on them at all times.

Public transportation in Belgrade consists of a network of buses, trolleys, trams and trains that connect the entire city; all domestic trains operated here by Serbian railways are included in a Eurail Global Pass. Taxis are readily available in most major districts or are only a quick call away, although most are only equipped to accept cash (Serbian dinars). There have been a few reports in recent years of illegal taxis operating in the city, so it’s important to only enter a taxi with the letters TX at the end of the registration number on the license plate. 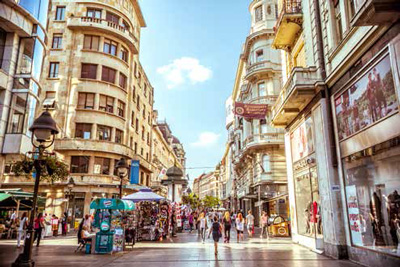 Most business is conducted in the city center off Mihailova, the main shopping street, with the typical workday running from 8 a.m. until 4 p.m. Typically, office attire consists of a shirt and tie for men (a suit is also appropriate) and dress pants or skirts for women. Serbians are incredibly warm and friendly, greeting first-time visitors with at least a handshake or an exchange of business cards and offering the less-formal kiss on the cheek for familiar faces (three kisses between men).

While most business in Belgrade takes place in the office, it’s common practice to discuss business over coffee or lunch or during dinner parties. A personal dinner invitation is a big deal in Serbian culture and should never be refused; it’s customary for guests to bring a small gift for the host along the lines of a bottle of wine, cigars or flowers. When dining with a Serbian, it’s regarded as an insult to refuse food or drinks, and it’s considered rude not to make direct eye contact during a toast.

The Belgrade Art Hotel features a stylish dining room that provides the perfect setting for a power breakfast or a quick business lunch, offering an American and French breakfast buffet (or fitness breakfast option) and à la carte dining menus for all meals. To impress both local and foreign clients, the restaurant Kalemegdanska Terasa is the only way to go, as it offers the best views of the city from the inside of the Kalemegdan Fortress. The upscale menu features local specialties presented with a French flair and a wine list that offers the top labels from around the world, including the best producers in Serbia. For trendier gatherings, Ambar Restaurant is an unexpected gem along the banks of the Sava River in Belgrade’s newest hot spot, Beton Hall. The restaurant is a favorite of Belgrade’s fashionable crowd (and a few American celebrities in recent months) for its craft cocktails, immense selection of Balkan rakia and modern Balkan cuisine. Don’t miss its Balkan Experience or Endless Brunch menus for groups.