Fiji may be a tropical South Seas paradise where traditional customs like fire-walking and kava ceremonies survive, but this archipelago of 333 islands speaks with a strong Indian accent: You’ll find the biggest Hindu temple in the South Pacific, chicken tikka masala everywhere from airports to restaurants, and Hindi as the third major language after English and Fijian. About half of all Fijians are Melanesians intermingled with Polynesians, but more than 40 percent are of Indian descent, whose ancestors were mostly indentured laborers brought from India to work sugarcane plantations from 1879 to 1916, when Fiji was a British colony.

While Fiji draws romantics, divers, luxury and privacy lovers, nature and adventure buffs and families, pick your island carefully: They offer different strokes for different folks, with varying scenery and activities. Ditto for lodgings. Private-island resorts, where only one resort but no village lies on a privately owned island, can be adults-only, couples-only or only allow older children; and options can range from several dozen bures (thatch-roofed cottages) or villas to just three or four for seclusion. The biggest islands, like Viti Levu (called the “mainland”), Vanua Levu and Taveuni, have many resorts with individual bures. Standard hotel rooms in multistory buildings that welcome families and have big pools are located on Viti Levu, where Western hotel chains like Hilton, Westin, Sofitel and Radisson Blu cluster side by side on Denarau Island, a 15-minute drive from Nadi Airport on its west coast where international flights arrive, with more big hotels on the Coral Coast on its south shore. 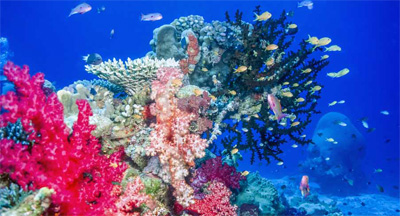 On Viti Levu, at the south entrance to downtown Nadi, the Hindu temple Sri Siva Subramaniya is a vision straight out of South India: Ornately carved sculptures in vivid primary colors adorn its façade, and a ceiling fresco depicts a six-faced god astride a peacock. To enter, remove your shoes and cover your shoulders and bare legs. A few miles north of Nadi Airport, the Garden of the Sleeping Giant, an orchid botanic garden in the shadow of the Sabeto Mountain foothills, is a gem for a serene nature walk or picnic. With rare varieties like ballerina orchids (that indeed look like delicate ballet dancers), the garden was the private collection of Perry Mason actor Raymond Burr, who bequeathed it to Fiji. Nearby, zip-line over 35 acres of jungle in the Saveto Valley and walk to waterfalls and natural pools fed by rapids on paths lined by pineapples, coffee trees and tree ferns at Sleeping Giant Zipline Fiji, named for the mountains that resemble a reclining human. 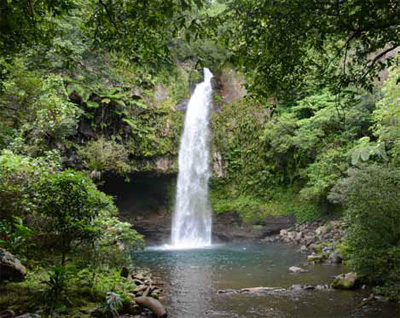 A waterfall in the rainforest of Taveuni © Eliaviel | Dreamstime.com

For fantastic diving, pristine rainforest and wildflowers, Taveuni Island leaves no doubt why Fiji is nicknamed the “Soft Coral Capital of the World,” thanks to its Rainbow Reef, Purple Wall, Great White Wall and Yellow Grotto, named for the vivid colors of their coral in the Somosomo Strait. Dubbed the “Garden Island,” Taveuni preserves most of its rainforest in Bouma National Heritage Park. Here you can walk to three Tavoro waterfalls, each at a different elevation, first on a lush path lined by torch ginger and brilliant foliage, then uphill through thick forest. On its Lavena Coastal Walk, you scramble across rocks to swim in a double waterfall after a walk along the beach filmed in Return to the Blue Lagoon, a boat ride or sea kayak excursion from Lavena village.

If you yearn for an ambitious hike (six hours minimum, round-trip), you can hike to Lake Tagimoucia in Taveuni’s central mountains and possibly glimpse the rare tagimoucia flower that grows only on its shore. Or trek to Des Voeux Peak, the island’s second-highest peak at 4,000 feet, for panoramic views of the lake and distant islands. Taveuni offers resorts at moderate and luxury prices, plus private-island resorts on tiny islands off its north coast, like ultra-luxury Laucala, owned by the Austrian billionaire founder of Red Bull (and formerly by Malcolm Forbes).

For history buffs, explore Levuka, Fiji’s first European settlement and first capital when it became a British colony in 1874. The UNESCO World Heritage site lies in the Lomaiviti Islands east of Viti Levu. Once a magnet for Europeans in the whaling, sandalwood and sea cucumber trade, a rowdy place with more than 50 hotels and bars, today it’s a sleepy village of 4,000 where wooden storefronts line its waterfront on Ovalau Island.

To truly get away from it all, the Lau island group is Fiji’s remotest region: 57 islands sprinkled across a vast territory east of the rest of Fiji. No banks, tourist shops or restaurants are here, and only a few islands offer lodgings of any kind, but the ultra-luxury private-island resort Vatuvara opened in late 2015.

Fiji Airways offers non-stop flights from Los Angeles (LAX) and Honolulu (HNL) year-round and from San Francisco (SFO) seasonally to Nadi International Airport on Viti Levu. The airline, which also offers Fiji as a stopover from Sydney Airport (four hours) and Auckland Airport (three hours), codeshares with American Airlines and Alaska Airlines. Fly to other islands from Nadi or Suva, Fiji’s capital, whose Nausori International Airport lies 15 miles from the city, or go by boat.

Where to Stay in Fiji

Laucala Island Resort This private-island resort of 25 one- to three-bedroom bures with private pools on a 3,000-acre island features five restaurants, a cooking school, a spa, horseback riding and a golf course. Laucala, off Taveuni $$$$$

Vatuvara Private Islands This ultra-luxury private-island resort offers only three huge stone and timber villas (the biggest a 5,220-square-foot one-bedroom), each with private pool and beach and spare-no-expense amenities, on an 800-acre island. Kaibu, Lau $$$$$

Governors Restaurant In a restored colonial bungalow home of a Fiji statesman, surrounded by vintage photos and travel posters, enjoy Fijian specialties and international food on the veranda or in the dining room. 46-50 Knolly St., Suva $$