Beyond ocean cruising and river cruising lies a third form of maritime travel — lake cruising — and the Great Lakes of North America offer the largest freshwater ecosystem on Earth for just such pleasures. Bordering the Canadian province of Ontario and eight American states, from Minnesota to New York, the Great Lakes’ system of five interconnected, land-encased gargantuan bodies of water holds more than one-fifth of the world’s fresh surface water. The shoreline is gigantic, too, measuring some 10,000 miles, studded with world-class natural, cultural, historic and urban sites. Nevertheless, far fewer major cruise lines venture here than into other major North American waterways such as the Mississippi River and the Alaskan coast.

The handful of major operators who do cruise the Great Lakes are each worth considering. All are fairly new to these waters and come with recently launched, state-of-the-art expedition ships. Though luxurious to a point, these vessels all are on the small side, carrying a few hundred rather than a few thousand passengers. The Great Lakes’ cruising season, also diminutive, runs May through September, with July the warmest and sunniest month and late August through early September the choice for leaf-peepers. 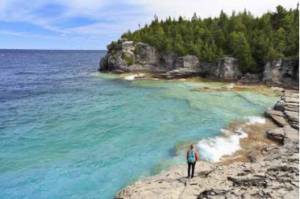 Another new operator in the Great Lakes, Victory Cruise Lines features premium exploration ships. Mississippi River maven American Queen Steamboat Co. recently purchased Victory, a good match since many a Mississippi traveler is eager to see what lies just to the north in America’s inland sea. Victory’s two 202-passenger vessels, Victory I and Victory II, promise mature passengers a relaxed, informative cruise and a free shore excursion in every port. Itineraries include an 11-day Detroit-to-Montréal voyage with stops at Niagara Falls, the Thousand Islands in the St. Lawrence Seaway, Cleveland and Detroit (home to the Ford Museum). Victory’s 11- and 13-day trips from Chicago to Toronto/Montréal add Mackinac Island and Georgian Bay (including Little Current and the world’s largest lake island, Manitoulin) to the mix, while a 16-day Chicago roundtrip (in June 2022 and 2023) explores the sights of Lake Michigan (the world’s largest lake in a single state) and Lake Superior (the world’s second-largest freshwater lake), along with port calls at Marquette, Mackinac Island, Duluth, Green Bay and Milwaukee.

Another top international cruise line, French-based Ponant, teamed with Smithsonian for a Great Lakes journey Sept. 8–15, 2022, aboard the 184-passenger Le Bellot, one of Ponant’s top exploration yachts. This Toronto-to-Milwaukee voyage, with Smithsonian experts on board, visits Niagara Falls, Georgian Bay (from Parry Sound to Little Current), Mackinac Island, Lake Superior and much of the length of Lake Michigan, the world’s largest lake within the borders of a single country. Plus, Ponant promises a free shore excursion at every port.

Want a taste of all the big sites in all five lakes? Try German-based Hapag-Lloyd Cruises and its 230-guest Hanseatic Inspiration, an expedition ship that features three gourmet restaurants; expert lecturers; an English-speaking crew; spa treatments; and in-cabin binoculars, coffeemakers and Nordic walking poles. The ship makes five interconnected voyages May through June, from Boston to Toronto to Chicago to Windsor (Detroit), capped off by a 14-day June 23–July 6, 2022, Chicago-to-Toronto cruise that takes in every last Great Lake.

Hiking and horseback riding opportunities abound, but above all, Great Lakes passengers will be mesmerized by the massive granite formations and wind- swept eastern pine trees that rake across Georgian Bay’s prized landscape, lapped by lake waters so blue a major paint company named one of its brightest blues in honor of the bay.