SITUATED ON THE ARABIAN PENINSULA, often amid Middle East chaos and turmoil, Oman manages to maintain a countenance of decorum and civility. Evading military clashes between its neighboring states, it implemented long-range plans for development and emergence. Much of the activity focuses on its capital city, Muscat.

Lying between the El Hajar Mountains and the Arabian Sea, Muscat serves as the seat of the country’s political, administrative and economic systems and home to a third of the country’s 4.5 million residents. With its proximity to the sensitive Strait of Hormuz, Muscat proved a historically important trading port in the Gulf of Oman, attracting foreign tradesmen and settlers who came to trade in fishing and agriculture. Persians, Spaniards and Ottomans were among overseas travelers to ancient Muscat, admired as “very elegant” by a 16th-century Portuguese writer.

Muscat’s sprawling 1,400 square miles divide into three principal urban areas: Muscat proper, the original settlement and now an enclave of restored historic homes and buildings; Waterfront Muttrah, the harbor scene of shipping and cruise ship anchorages, upgrading to enhance its appeal to visiting tourists; and the commercial district centered in Ruwi, a cluster of high-rise apartments, office buildings and headquarters of international companies.

Ruled since the 18th century by the Al Said Dynasty, friction with imams of the interior destabilized the sultanate until 1970 when Qaboos bin Said, with assistance from the British, overthrew his father in a bloodless coup. Consolidating and renaming the region the Sultanate of Oman, Sultan Qaboos united tribal territories and launched programs to end the country’s isolation and to use oil revenues for modernization and development. Slavery was abolished, and freedom of religion was allowed. 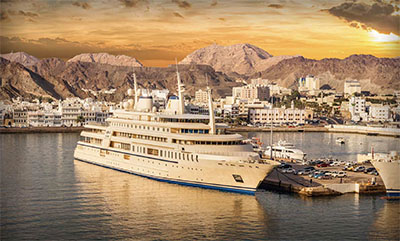 To promote internal stability and to supplement expats and immigrants, in 1988 the country initiated Omanization. The local population is enlisted and trained to integrate into the workforce, expanding the economy and infrastructure. Companies are rewarded for increasing their quota levels toward the target goal of 72 percent local personnel. Five-year development plans initiated in 1976 resulted in the establishment of the petroleum industry; construction of the new shipping port, Mina Qaboos; and new ministries for social services, health, education and the tourist industry. Oman emerged with a higher standard of living than that of neighboring countries.

As it has throughout history, trade dominates the economy, with oil products joining the traditional exports of dates, fish and mother-of-pearl. Muscat is home to multibilliondollar conglomerate CK Industries, and major trading companies Suhail Bahwan Group and Saud Bahwan Group partnered with dozens of international corporations including Toshiba, Toyota, Hewlett-Packard, Mitsubishi, General Motors and Chrysler. Petroleum Development Oman — a joint operation of the government, Shell, Total and Partex — reported a combined oil, gas and condensate production record for 2016 equal to 1.29 million barrels of oil equivalent per day, with a growing expansion into hydrocarbon, renewable energy generation and water management. Established in 1988, the principal stock exchange, the Muscat Securities Market, operates with transparency, disclosure regulations and requirements. Numerous hospitals, clinics, universities and schools thrive in the private sector. 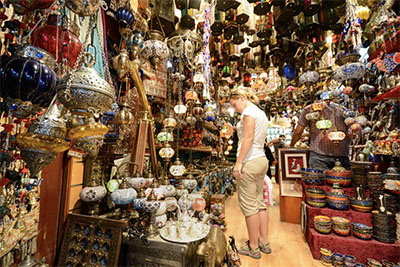 Arabian lamps for sale at a souk © LUKASZ KASPEREK – DREAMSTIME.COM

Clearly, the leadership of Sultan Qaboos deserves credit as a key to Oman’s progress. The longest-serving monarch in the Arab world, a devotee of opera and classical music, he received his education in India and at the Royal Military Academy Sandhurst in England. While his rule is absolute, he is said to rely more on the business elite than on family members for counsel. Nearing age 80 with no clear heir, the delicate issue arises of whether his successor would maintain absolute power or take steps to separate state powers.

Peaceful protests following the Arab Spring raised issues of job opportunities, salary increases, establishment of Islamic banks and expulsion of some current ministers. But for the time being, the outlook for Muscat includes a continued, methodical integration into the global scene.

CHECKING IN WITH HAURA AL-WAHAIBI 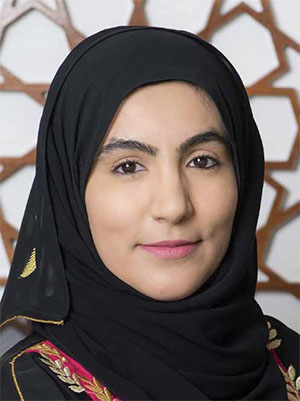 Oman Commercial Attaché, Washington, D.C.
Embassy of The Sultanate of Oman in the United States

Living in America, what do you miss about Muscat?
I miss special occasions, national and religious holidays, and weekends when extended families get together and have picnics and trips, every time to different places. Also I miss the weather — it can be hot there, but at least it is warm and sunny. Mainly, I miss the people.

How has the country changed during your lifetime?
My mother didn’t have the opportunity to study; school was limited to boys. And Muscat’s big city gate closed after sunset. You were either locked in or locked out. You had to go through the government to get eyeglasses. Now His Majesty modernized education and health, and everybody is happy about the changes.

Why is Muscat a good place to do business, and what are compelling opportunities?
The government supports foreign direct investment, offering a package of incentives: five years’ tax exemption, plus Americans have 100 percent ownership of their companies and can send their money home with no restrictions. Business is flourishing because Oman has spent a lot of money developing the seaport and the new airport. We focus on economic zones, free zones and seaports that are logistic hubs. South of Muscat, Duqm on the Indian Ocean is the largest economic zone in the Middle East.

Trade is good business — shipping American products not only for use in Oman but for distribution. We have storage and seaports, so it is easy to distribute to the Middle East and to Indian and African markets.

MuscatWe deal with men and women like brother and sister, even in government and operations. We are equal, and the government believes in women and gives preference to them.

What tourism is encouraged, and is the country safe to visit?
We focus on culture and community-based activities in nature. Oman has wilderness parks, mountains, beach resorts and a combination of sea and mountains you can’t find in other Middle Eastern countries. Oman is one of the safest countries in the world, 100 percent safe. The Omani people and our leaders don’t believe in war and self-promotion. Oman has no issue with its neighbors.

Is there concern about leadership after Sultan Qaboos?
Our government is stable. We don’t have your kind of competition between parties. We are working in one party and one system, so we don’t have competition about who will rule.

Things to Do in Muscat

History, beaches and culture provide abundant options for sightseeing and recreation. Visitors can charter boats for fishing and diving. The waterside corniche lined with date palms and monuments connects the historic fish market and extensive bazaar. Follow it south toward the massive city gates into the ancient center, now a region of restored historic adobe huts and flowery boulevards surrounding the sultan’s palace. Scattered in both regions, museums feature culture and folklore, and tourist attractions include restored Portuguese forts. Keep in mind offices close for lunch from noon to 2:30 p.m.; stores close from noon to 1 p.m., then remain open until 8 p.m. 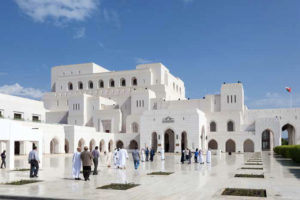 Lying about 20 miles south of the old city on Sultan Qaboos Highway and originally called Seeb, Muscat International Airport is the country’s main airport and the hub for Oman Air and Salam Air. A new passenger terminal with 118 check-in counters and 45 gates opened in 2018, with further expansion planned to number it among the world’s top 20 airports by 2020. Public buses stop in front of the airport area; hotel shuttles are preferred. Blue-andwhite metered taxis to the business district cost around $25.

COMING AND GOING
U.S. citizens must have a valid passport with six months validity and a visa. No sponsor is required for 10-day, single-stay visas, which can be obtained online. Visas must be used within a month of approval; the fee is $62.

OFFICIAL LANGUAGE
Arabic is official; many residents are familiar with English. Hindi and Urdu are common among the sizeable Indian population

Where to Stay in Muscat

AL BUSTAN PALACE, A RITZ-CARLTON HOTEL Said to be one of the world’s finest hotels, this splendid urban resort is a favorite project of Sultan Qaboos. Al Bustan Street, Quron Beach $$$$$

KURKUM Indian cooking — biryani, prawn curry, coconut rice — is the focus at this cozy and casual spot on the Corniche near the souk on Muttrah Harbor. Way No. 08, Muttrah Corniche $$$