Can wildlife coexist with the modern world? The question is tested starkly in Nairobi, capital of Kenya. In 1946, when the city was home to just 119,000 people, a national park was declared immediately to the south. The city has since boomed, with a population of more than 4 million now. Against the odds, Nairobi National Park survives. Just three miles from the heart of downtown, wild lions roam free.

As the skyline of the city transformed, skyscrapers provided a dramatic backdrop for photos of the park’s lions, rhinos, buffalos and giraffes. Now there is another, more immediate man-made intrusion: A new Mombasa- Nairobi railway line opened in 2019. Elevated on huge concrete pillars, it splits the park in two.

From one perspective, the new railway detracts from the wilderness experience of a daytrip safari into the park. Do you really want your photos of giraffes framed by concrete pillars? On the other hand, this could be a model for the future. Both park and city make compromises in order to coexist side by side. The animals appear to be resilient, and the usual rhythms of their lives continue unabated. 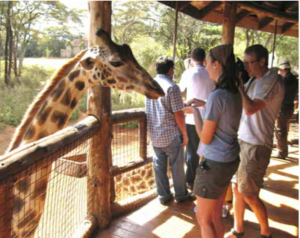 You can happily spend an entire day in the park (there are still large swathes of it without concrete pillars or skyscrapers in the background), or you can combine it with some of Nairobi’s other visitor attractions. Highlights include Karen Blixen House (the setting for the movie Out of Africa), Langata Giraffe Centre (where you can encounter giraffes eye to eye from a raised platform) and Elephant Orphanage run by Sheldrick Wildlife Trust (if you “adopt” an elephant — $50 per year — you can participate in the evening feeding time).

When I first visited Nairobi as a child in the 1970s, it was still possible to hear lions roaring at night from your downtown hotel room. The lions still roar, but the round-the-clock din of the city drowns them out. And yet, no matter how loud or busy the city is, there remains the knowledge that within a short drive you could be parked beside a pride of wild lions. No other major city in the world offers that.