CRUISE PASSENGERS WILL FIND more choices in ports and itineraries in North America in 2020, from paddle wheelers plying the Mississippi River to ocean liners skirting the East and West coasts of the United States and the Maritime Provinces of Canada. Alaska continues as a hot spot, with steady growth in passengers on vessels big and small. Cruising the Great Lakes, once a niche market, is going mainstream to address travelers’ increasing curiosity about these five inland seas.

“Cruise ships have plied our waters for years,” said David Lorenz, chair, Cruise the Great Lakes, a collaboration of cruise lines and tourism bureaus formed in 2018 to promote cruising in the region. “The market has grown organically in recent years despite the lack of a consistent regional brand or marketing program.” Citing traffic of nearly 100,000 passenger port visits last year, he said the Cruise the Great Lakes initiative will “position the region for sustained cruising growth for years to come.”

From spring to fall, Great Lakes cruises venture across these vast inland waterways for “sea days” with no land in sight. Ships dock near the heart of cities, making it easy for passengers to explore on their own or take an excursion often included in the fare. Chicago and Toronto are frequent embarkation and disembarkation points, with port calls at Detroit and Mackinac Island, Michigan; Cleveland, Ohio; and Manitoulin Island, Ontario. Vessels are small enough to enter locks, including the busy Soo Locks between lakes Superior and Huron, and the eight locks of the Welland Canal bypassing Niagara Falls.

“There’s a bright future ahead for the Great Lakes,” said Luis de Sousa Marques, hotel director, Victory Cruise Lines. Its two 202-passenger vessels, Victory I and Victory II, were acquired by American Queen Steamboat Co., remodeled and relaunched on the Great Lakes in 2019. Groups had primarily booked the ships, but the new owners are targeting individuals.

Coming to the Great Lakes next year, the 230-passenger expedition ship Hanseatic Inspiration, launched by Hapag-Lloyd Cruises this October, will make two 14-day voyages, including a rare crossing of Lake Superior.

One of the world’s most popular cruise destinations, Alaska was expected to break its cruise record with 1.3 million passengers once the 2019 season final tally comes in. Those cruisers traveled on more than 20 cruise lines operating 40 ships, ranging from expedition vessels to luxury liners and with capacities from 10 to more than 4,000 passengers. Cruises along the thousand- mile Inside Passage and around Southeast Alaska make stops in the capital, Juneau, and settlements such as Sitka, Skagway and Ketchikan tied to the state’s gold rush, pioneer and Native American history. A quota on vessels allowed in Glacier Bay prompted exploration of other scenic spots. Pairing a cruise with a land tour remains a popular option. 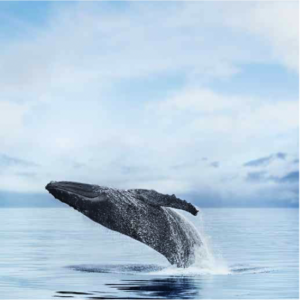 A whale breaching near a Princess Cruises ship in Alaska PHOTO: © PRINCESS CRUISES

Princess Cruises carries the most passengers in Alaska with eight ships offering 11 itineraries, including a rare roundtrip from Los Angeles in 2020. Its 25 cruise and tour itineraries utilize the line’s five wilderness lodges and 10 rail cars transporting passengers into the interior to sites such as Denali National Park.

Norwegian Cruise Line will sail four ships in Alaska in 2020, including its Norwegian Sun and Norwegian Joy with recent bow-to- stern renovations. The line is partnering with Icy Strait Point, an Alaskan-owned cruise destination, to build a second pier slated for completion in 2020. It will provide greater access to brown bear viewing platforms and the world’s largest zip line.

UnCruise Adventures stretches Alaska’s cruise season with the longest calendar of departures, April through September, in 2020. Six vessels, boutique yachts to small expedition ships, will cruise on seven itineraries, some including active pursuits such as kayaking and hiking. American Cruise Lines, operating Inside Passage cruises on its 175-passenger American Constellation, will add an 11-day Alaskan Explorer round-trip Juneau cruise in 2020. Hapag-Lloyd Cruises will position its MS Bremen in Alaska next summer.

Alaskan Dream Cruises, an offshoot of a boat-building and tour company long operated by native Alaskans, plans on operating five vessels in 2020 holding 10 to 76 passengers. The latest addition, the Kruzof Explorer, was once a Bering Sea crab-fishing boat.

North American river cruises focus on the Mississippi and its tributaries with access to antebellum plantations, Civil War sites and historic river cities, and on the Snake and Columbia rivers with wine tasting, pioneer history and iconic Pacific Northwest landscapes.

American Queen Steamboat Co. launches the American Countess in 2020 to join its American Duchess and American Queen paddle wheelers on the Mississippi. Its American Empress cruises the Pacific Northwest, while UnCruise Adventures’ 90-passenger SS Legacy offers adventure and wine/culinary cruises on the Columbia and Snake rivers in 2020.

American Cruise Lines’ two modern-style riverboats, the American Harmony and American Song, launched in 2018 and 2019 on the Mississippi, the Snake and the Columbia. American Jazz launches in 2020, and two more modern vessels are on the drawing boards. They’ll join the line’s four Victorian-style paddle wheelers.

Ships from cruise lines big and small head to New England and Eastern Canada for the fall colors. Depending on the length of the itinerary and size of the ship, ports in the United States may include Boston; Newport, Rhode Island; New York City; and Portland and Bar Harbor, Maine. In Canada ships might cruise the St. Lawrence River and Seaway and call at Montréal; Québec City; Halifax, Nova Scotia; Saint John, New Brunswick; and Charlottetown, Prince Edward Island.

Princess Cruises extends one of its five Northeast itineraries in 2020 to Greenland, one stop on a 16-day cruise from New York City. Its 13-day Canada and Colonial America itinerary sails between Québec City and Fort Lauderdale, Florida. Land tours added to several itineraries take passengers to Niagara Falls, Philadelphia, Colonial Williamsburg and Thomas Jefferson’s Monticello in Virginia, and Gettysburg Battlefield in Pennsylvania.

On the West Coast, Celebrity Cruises’ Celebrity Eclipse will cruise between San Diego and Vancouver in 2020. Carnival Cruise Line, the No. 1 line on the coast, carrying 600,000 passengers annually, will continue cruising to Catalina Island, California, and Ensenada, Mexico, with many departures from its refurbished Long Beach Cruise Terminal.