AS CRUISE SHIPS GROW LARGER and more luxurious, cruise ports rush to keep up, modernizing and expanding their facilities across the globe. In Florida, which boasts the three busiest cruise ports in the world, the busiest harbor, Miami, is readying a new terminal for 2018, built by Royal Caribbean for mega-ship passengers. Runner-up rival Port Everglades in Fort Lauderdale is lengthening Slip 2 to accommodate more resort-sized ships, too, and remains the only cruise port to offer passengers Global Entry security clearance. As for third-place Port Canaveral in Orlando, the latest enhancement is a $7 million amphitheater. 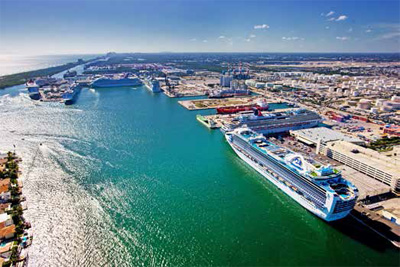 On the U.S. Gulf Coast, Houston ceased cruise operations, but Mobile, Ala., returned after a five-year hiatus, adding a new climate-controlled customs area with eight stations. The Port of New Orleans converted two older terminals into one, enlarging the lobby and baggage areas for mega-ship passengers. Galveston, America’s fourth-busiest port, expanded Terminal 2 and now offers valet parking, making it easier to drop off and retrieve vehicles.

Elsewhere, port expansions proliferate. Montréal completed a massive makeover of its 50-year-old cruise terminal in anticipation of record numbers of arrivals for the city’s 375th birthday celebrations. Seattle, enjoying a surge in Alaska-bound cruises, welcomes the expansion of its Bell Street Cruise Terminal under the management of Norwegian Cruise Line. Carnival is investing $33 million to build and operate a second private cruise terminal in Barcelona, Europe’s largest cruise port.

Occasionally, a brand-new cruise port pops up. Next year, London will open its first cruise port, located in the Royal Borough of Greenwich, right on the Thames. The London City Cruise Port will limit the size of visiting liners to a modest 1,600 passengers, but it has drawn fire from locals concerned about environmental damage and the onslaught of tourists. Similar protests also continue in Venice, the world’s 10th-busiest cruise port, where UNESCO warns it will place Venice on its list of endangered heritage sites if the largest cruise ships are not prohibited soon. On a brighter (and greener) note, the Port of Red Hook in Brooklyn joined a handful of other pioneers by enabling cruise ships to shut down their smokestacks and plug into the port’s power grid.

Any port may do in a storm, but cruise passengers are fussy about where they embark and disembark. As well as expanding operations to handle bigger ships, ports worldwide are scrambling to improve passenger facilities and services.

Last week was the start of football season with Americans around the United States celebrating the return of the NFL and football Sundays. Alaska Airlines joins the celebration.

Legendary Hotel del Coronado reached another milestone in its $400 million Master Plan reimagination, with the completion of an extensive, historic restoration of the hotel’s front porch and lobby; a redesigned main entry and drive experience; new guestrooms in The Views area; and refreshed retail concepts.

As a native of the Philadelphia region, I’m quite familiar with the drive in and out of the City of Brotherly Love. Even as the city’s skyline continually transforms, my favorite views of Philadelphia have always been along Boathouse Row, with the Philadelphia Museum of Art rising in the background, before looping around the museum to the flag-lined Benjamin Franklin Parkway. Home to many of Philadelphia’s incredible and world-renowned museums, the Fairmount neighborhood is fittingly aesthetically pleasing and practically synonymous with fine art.

Rosewood San Francisco to Open in 2026

Set to open in 2026, Rosewood San Francisco will be the last skyscraper developed in the downtown region for the foreseeable future. The projected 800-foot-tall property will host a hotel, residences, office and rental spaces. The brand’s third property in California will join Rosewood Sand Hill in Menlo Park, and Rosewood Miramar Beach in Montecito.

Slow Down and Unwind in Easy-Going Phuket

Fall into Luxury at Viceroy Chicago

Check out these irresistible offers from SLS properties in Miami: