THE CAPITAL OF AMERICA’S MIDWEST, Chicago is arguably one of the most welcoming, friendly and accessible cities in the world. Dubbed the Windy City both for its political past and for the winds blowing in off expansive Lake Michigan, it offers business visitors a look into its rich history, gorgeous architecture, world-class culture and sports teams and an array of eclectic restaurants serving cuisine from all over the world.

Chicago, the country’s third-largest city, proves a powerhouse of industry. In the late 1800s and early 1900s, the city earned an infamous reputation as a center of organized crime with notorious gangsters like Al Capone, “Bugs” Moran and “Big Jim” Colosimo controlling the streets. Even long after that crime departed, the reputation remained, but thankfully superstars like Michael Jordan and Oprah Winfrey helped to give the city a more positive global image, and it has continued to flourish since. These days a new crop of cultural mavens, like muralist Hebru Brantley, artist Theaster Gates, Chance the Rapper and singer Jamila Woods, keep giving back to the city that inspires them. They prove Chicago, while often dubbed the “Second City,” is truly tops when it comes to the arts and creativity, which extends into business.

With companies like United Airlines, Boeing, Walgreen’s and McDonald’s — not to mention top advertising agencies like Leo Burnett and tech hubs like 1871 inside theMART — there’s a diverse cross section of workers. The degree to which the workaday world is formal or relaxed depends on the industry; that extends to business meetings and how people dress. Things seem much more casual in general in the city’s offices, but you’ll definitely find people in suits in banking, finance and law. Among tech, advertising, marketing and the like you will find more denim, sneakers and hip styles. Women in Chicago are held in high regard in business, with many holding top executive positions across several industries.

While the city comprises 77 unique neighborhoods like Bronzeville, Pilsen and Logan Square with residents representing many cultures, ethnicities and backgrounds, most of your business activity will likely center around the downtown area (the Loop, West Loop, River North and South Loop neighborhoods). Transportation to downtown costs about $35 from O’Hare International Airport and $30 from Midway International Airport whether you take a taxi or ride share service. If you have a chance to explore those other neighborhoods, you’ll be treated to colorful murals, delicious ethnic food and numerous proud communities that showcase Chicago’s immigrant population. It’s the heart of what makes Chicago beat and which the city proudly embraces.

If you’re coming to town for a large conference, chances are it’ll occur at McCormick Place, Chicago’s largest conference center a bit south of the city center and the sprawling Museum Campus, with Lake Michigan as its backdrop. But many conferences and events are held in hotels like the Hyatt Regency, The Peninsula and the newer Ace in the city’s hip Fulton Market neighborhood. That will give you a chance to see different parts of the city and take in some top restaurants.

Chicago is home to more than 20 Michelin-starred restaurants, including superstar chef Grant Achatz’s 3-Michelin-starred Alinea and the 2-starred Oriole, Smyth and Acadia restaurants. A slew of 1-star spots include Korean-inspired Parachute; Danish-American Elske; and Blackbird, a gorgeous, stark-white spot from renowned chef Paul Kahan at the edge of the city’s Randolph Street restaurant row. 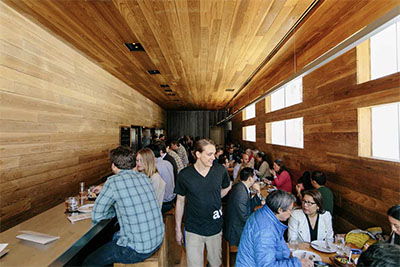 Avec © ONE OFF HOSPITALITY

If you or your colleagues fancy yourselves food aficionados, you’ll want to hit that robust restaurant scene in the Fulton Market District. In addition to Blackbird, try Kahan’s Mediterranean wine bar next door, Avec, for its seasonal lunch and dinner menus. Definitely order the chorizo-stuffed medjool dates, squid ink spaghetti with mussels and Fresno chilies, and whatever whole roasted fish is on the board that night.

Down the street you’ll find one of the city’s toughest spots to get into: Top Chef winner Stephanie Izard’s acclaimed Girl & the Goat. While reservations book up months in advance, you can sometimes get a day-of table or walk in and sit at the bar. It’ll be worth it when you’re enjoying chickpea fritter chaat with carrot hummus; squash blossom crab Rangoon; and the wood oven-roasted crispy pig face, a signature must-have.

If you can’t get into Achatz’s Alinea, his restaurant Next, which changes its concept three times a year to focus on a different cuisine or theme set in a place or time, may have space. If not, pop next door to his more casual spot, Roister, for the decadent, braised, poached and fried whole chicken or the Rohan duck platter served with dirty rice and sausages and accompanied by various mustards. Afterward, ask if you can get into its experimental cocktail bar, Aviary, for a selection of cocktails the likes of which you’ve never seen before.

While these are just a few options, there’s no shortage of great eateries in that area, but you can venture up to Logan Square to Fat Rice, Giant or Mi Tacoya Antojería to enjoy smaller, more intimate neighborhood spots with deliciously elevated fare. There’s a reason the James Beard Awards are now being held in Chicago through 2021. Chicago is no longer the hog butcher to the world, but it still knows how to host its guests with aplomb.