TIME STANDS STILL WHEN YOU EMBARK on the Trans-Siberian Railway. Most obviously, you become immersed in a travel experience little changed since the 19th century. Electric engines replaced steam, but otherwise it’s the same rhythm of wheels on track, the same sway of the carriages, the same endless scroll of Russian countryside.

More subtly, you ride within a traveling warp of Moscow time. Through six nights and seven times zones, across nearly 6,000 miles, all clocks on the train and on the station platforms are set to the time of your increasingly distant departure point. It makes logistical sense, but the farther east you travel, the greater the difference between the time on the clocks and the reality.

Time stands still in one other way. Without internet access to the outside world, there is little relief from one forgotten aspect of old-fashioned travel: long hours of boredom. Set against the stretches of tedium, the highlights of the journey shine like jewels. 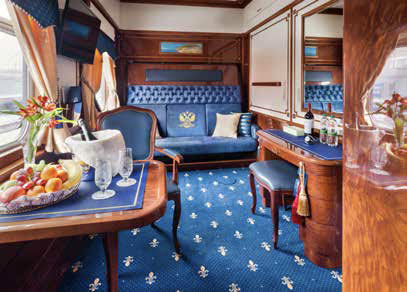 Contrary to popular belief, the Trans-Siberian Railway is not a single route or a particular train service. There are several options, some more adventurous than others. The high-end choice is the Golden Eagle luxury train, running a limited number of journeys on the Trans-Siberian routes between July and September. Cabins are en suite with showers, and there is fine food in the dining car, expert lectures during the journey, and even WiFi access in the bar. Pampering doesn’t come cheap: The cabins range $16,000–74,000 (for the Imperial Suite) for two weeks.

At the other end of the scale, third class on a standard train costs around $200 for the entire journey, which can be broken up along the way. There are no showers, bathroom facilities are shared, and you’ll sleep close to complete strangers.

The ideal middle ground between those extremes is first class on the Rossiya service. A two-berth compartment costs around $1,800 (excluding accommodation at your chosen stops). Aboard the train you will immediately come into the orbit of the formidable female cabin attendants. Be sure to establish a good relationship with them. Your well-being throughout the journey is in their hands. 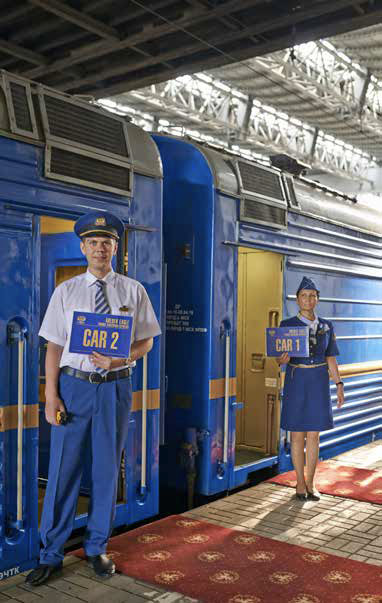 Although the standard Trans-Siberian services run in both directions (and are heavily used by locals), most foreign tourists opt to travel eastbound, starting either in St. Petersburg or at Moscow’s Yaroslavsky Station. The classic route is to Vladivostok in the Russian Far East, though there are two other popular routes, both to Beijing, either via Mongolia or Harbin.

Non-stop, each route takes six nights to complete. Tourists tend to break the journey along the way, giving themselves up to two weeks from start to finish. One of the first must-see stops is the city of Yekaterinburg, located close to the Ural Mountains — the geographic divide between Europe and Asia. The downtown skyscrapers could be anywhere, but there is also plenty of pre-Soviet architecture, including the impressive Kharitonov Palace.

Traveling on, Irkutsk presents the next essential stop. While interesting in and of itself, the city’s major attraction is nearby Lake Baikal, the deepest lake in the world, containing approximately 22 percent of the world’s fresh water. Listvyanka, the closest lakeshore town, can be reached in about an hour by bus from Irkutsk.

Lake Baikal harbors many unique animal species, including the remarkable Baikal seal. The seals can be seen in captivity at the aquarium in Listvyanka. To see them in the wild, it is worth arranging an escorted tour to the Ushkaniye Archipelago in the center of the lake. Allow three days, departing from Irkutsk.

From Irkutsk, the onward routes branch in three directions. The Mongolian option to Beijing will take you via that country’s capital, Ulaanbaatar. Heading southeast from there, the tracks cross the vast Gobi Desert. The other route to Beijing stops at Harbin, one of China’s most interesting cities. Best known for its winter ice festival (December–February), the city boasted a large Russian population in the early 20th century, with its architectural legacy still evident. 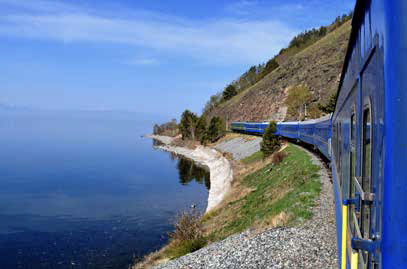 On the Russian route, some travelers choose to stop off in the city of Khabarovsk, at the confluence of the Amur and Ussuri rivers. The 500-mile route from there to Vladivostok takes you through Siberian tiger country, though the chances of spotting one of these shy big cats are extremely remote.

And so, at last, arrival in Vladivostok, a naval port closed to foreigners until the collapse of the U.S.S.R. in 1989. You probably won’t want to stay here long; it’s not the most inspiring place. But to paraphrase Ralph Waldo Emerson: Life is not a destination, it’s a journey. Few journeys match the Trans-Siberian Railway. The Rossiya service departs from Moscow on odd-numbered dates and from Vladivostok on even-numbered dates.