APPROXIMATELY SIX MILES offshore, a shimmering white island appears. Or is it a shopping mall or an entertainment complex? Or a theme park? Or a huge resort hotel? Or a floating town of 8,000 people? Whatever it is, it is moving steadily and silently along the horizon, heading north. Even at a distance, from my vantage on the waterfront of a Spanish coastal town, I feel dwarfed. I am gazing across at Symphony of the Seas, the largest cruise ship in the world.

Currently the largest, I should say. In recent years the mantle has been passed with remarkable frequency to successive ships of the same cruise company, Royal Caribbean International. In 2009 the world champion was Oasis of the Seas, overtaken a year later by Allure of the Seas, itself surpassed in 2016 by Harmony of the Seas. The reign of Symphony of the Seas will last until 2021, when a slightly larger (as yet unnamed) sister ship is scheduled to take to the waves. 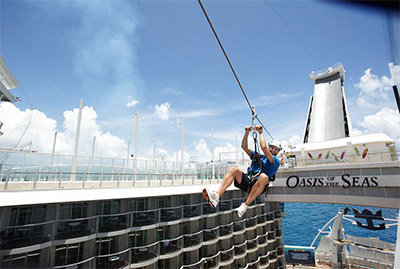 Royal Caribbean is not the only player in this mega-ship race. MSC Cruises, Norwegian Cruise Line, Dream Cruises, AIDA Cruises, Costa Cruises, Carnival Cruise Line and P&O all have mammoth ships planned for the near future, many of which will be powered by liquefied natural gas. They won’t just be huge, they’ll also be green.

Why the obsession with size? The simple reason is super-sized cruise ships are popular, and popular ships make money. The more complicated reasons involve an increase in what’s known as Panamax (the maximum size of ship that can use the Panama Canal) and fundamental changes in the cruise market, putting the emphasis on the ship as a destination in its own right.

From 2016, bigger locks and a widening of the Canal significantly increased the size of ships able to traverse Panama, enabling shortcuts between the Atlantic and the Pacific. But for the largest cruise ships, the new Panamax is academic. They will always be way too big. Symphony of the Seas is more than double the maximum tonnage for the Canal. Therefore, it is not suited to the traditional seasonal schedule, spending winters port-hopping in the Caribbean with summers in Alaska. 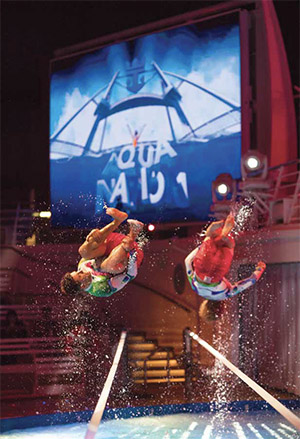 When the ship is the resort, the routes become secondary. The Caribbean remains the preferred winter location, and the Mediterranean has become dominant for the summer trade. For many passengers, the ports of call are merely a diversion. All of the main attractions reside on board.

Gone are the days when the highlights of a cruise included dressing up for dinner with the captain or gazing landward from the rails. From the Spanish shore, I photograph Symphony of the Seas and instantly post the image to Twitter. I expect reciprocal images from the ship looking in my direction. But there are none. The Twitter timeline is full of images of the ship’s glittering interior: the Central Park, with 20,000 tropical plants; the funfair on the Boardwalk; the line for Starbucks; last night’s show in the poolside AquaTheater; the twin spiraling slides of the Ultimate Abyss, down which adrenaline junkies can descend 10 stories in 13 seconds.

The facts of the giant ship are breathtaking. It has 18 decks, 24 elevators and seven neighborhoods (including Central Park, the Boardwalk, the Royal Promenade and the Youth Zone). Its 2,774 guestrooms accommodate a total passenger capacity of 6,680 (plus 2,200 crew). The cost of construction was $1.35 billion.

Symphony’s sister ship, Allure of the Seas — slightly smaller but costing $1.5 billion — boasts a two-deck dance hall and an ice skating rink. Oasis of the Seas ($1.4 billion) has basketball and volleyball courts, a zip-line over the central atrium and a miniature golf course. Norwegian Joy (approximately $700 million) includes a go-cart racetrack. The Disney Dream ($900 million) has the world’s first at-sea water coaster. Celebrity Edge ($1 billion), due to launch in late 2018, will feature a Magic Carpet, a tennis court-sized platform that will slide up and down the outside of the ship.

As the big-ship market becomes increasingly competitive, the unique selling points become ever more outlandish. The use of drones will likely become commonplace in the future, both for food and laundry deliveries direct to stateroom balconies and even to enable passengers to board at sea. Symphony of the Seas already has a Bionic Bar in which automated arms mix and serve the drinks, and fully automated restaurants are on the drawing board for future ships. 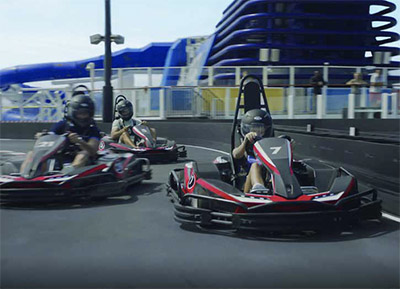 Innovation is limited only by current technology and the imagination of the designers. But what about the size of the ships? How much bigger can they get? Some experts argue they’re already too big.

For a start, the larger the ship, the fewer ports capable of handling it. It’s not just a question of the physical space required for docking but also of dealing with the mass movement of thousands of passengers. Many of the smaller Caribbean islands already struggle to cope with the sudden influx of visitors. Coach excursions in particular can present a logistical nightmare; some islands simply don’t have enough vehicles to accommodate everyone who might want to take a trip inland.

As the world fleet of mega-ships grows, even the larger ports feel the strain. Receiving two or three cruise ships at the same time pushes the current capabilities to the breaking point. Either the ports of call will have to invest in upgraded passenger terminals and transport infrastructure, or the mega-ships will have to make do with a shrinking list of suitable ports of call.

Sheer size presents other problems. One of the most common is the outbreak of illness, especially norovirus — exceptionally contagious and leading to vomiting and diarrhea. In the enclosed environment of a ship at sea, it can spread among passengers and crew with alarming speed. The larger the ship, the more people infected. Although most outbreaks strike fewer than 10 percent of the people on board, the illness can make a misery of dozens (sometimes hundreds) of cruise vacations.

All other issues are dwarfed by the almost unthinkable possibility of a mega-ship catching fire, running aground or sinking. Regulations set by the International Maritime Organization stipulate full evacuation should be completed within 30 minutes of an order being given to abandon ship. To date, the only true emergency affecting a mega-ship came when Costa Concordia ran aground off an Italian island in 2012. In that case, evacuation took six hours; 35 of the 4,200 people on board died.

Not surprisingly, Symphony of the Seas addresses safety by going big. Each of its 18 lifeboats can carry up to 370 people. The lifeboats are the last line of defense. The new mega-ships have innumerable safety systems to protect against all possible threats. Even so, one of the first big ships (though it looks like a tugboat compared to the current generation), RMS Titanic provides a lesson from history that you can never be too careful. Accidents will always happen.

Although safety is the most important factor when designing a new ship, the contingencies are deliberately discrete. First and foremost, the aim is to wow the passengers. Symphony of the Seas, in common with other new-generation mega-ships, doesn’t disappoint. It is breathtaking from every angle, whether you’re on board in your private stateroom or the public areas or if you’re standing on shore six miles away watching it sail past.