If you’ve ever visited Versailles Palace, outside Paris, it may be a stretch to imagine staying on palace grounds and having the chance to see the Royal Apartments, Hall of Mirrors, Le Grand Trianon, Le Petit Trianon, Le Hameau and Marie Antoinette’s farm, separately, on exclusive, private, after-hour, docent-led tours. Yet, since June 2021, when Airelles opened Le Grand Contrôle, guests have flocked to the uber-luxe, boutique hotel and spa to do just that. 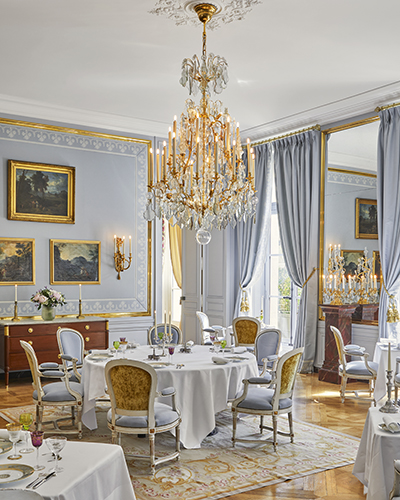 Even the culinary program nods to the era; so who better than 20-Michelin-starred chef Alain Ducasse to create the fantasy? Candlelight and classical music by Bach and Vivaldi accompany carefully curated Royal Feasts that reinterpret King Louis XVI’s extravagant meals are served by waitstaff in 18t- century dress who present dishes on gold, silver or vermeil dome-covered dishes. On Sundays, the Royal Brunch, Le Grand Couvert, replicates the King’s soup and adds an extravagant buffet.

Courtly treatment extends from the valet at the gate to every breakfast, where seats with upholstered chairbacks are positioned around the table to face Le Nôtre’s famed L’Orangérie and the grand, 100-step staircase to the chateaux. (Not to worry, there’s a bevy of private golf carts and vans!) Imagine an event here for up to 54 guests, or within the chateau itself, a special amenity reserved for hosts who takeover all 14 rooms and suites (for 36 sleepover guests).