WHILE MOST CRUISE LINES “sail” the seven seas propelled by engines, Windstar Cruises made its name with three ships that really, truly swept from port to port the old-fashioned way, albeit with up-to-date, computer-controlled sails. Windstar’s first two sailing vessels, the Wind Star and the Wind Spirit, are 148-passenger boutique ships with four 204-foot masts. Windstar’s largest vessel, the 312-passenger Wind Surf, boasts seven triangular, self-furling, computer-operated sails deployed on five masts, each towering 221 feet above teak decks — making it one of the two largest sail cruisers in the world. To be sure, all three of Windstar’s sailing vessels use motors most of the time, but when the sails come out, there’s no far-ranging cruise line with quite so romantic a look and feel. 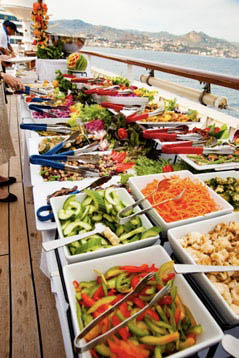 In 2014 and 2015 Windstar Cruises doubled its fleet, adding three more 212-passenger boutique vessels: the Star Pride, Star Legend and Star Breeze. While these ships lack sails, the sleek vessels deliver the signature Windstar experience of smart, ultra-casual sailing. The Windstar cruise style appeals to couples seeking that intimate, romantic holiday at sea. Dining is bistro-style, casual but upscale. There is no assigned seating or formal nights, no big shows, but there is a plethora of water sports from diving, snorkeling and sea kayaking to waterskiing and, yes, windsurfing. This is a premium cruise line, but the luxuries are understated. The casino is small, the cabins (all outside) have portholes or French balconies, and the fitness facilities are compact compared to those on larger luxury vessels.

Windstar’s small premium ships can call on off-the-beaten-track ports within popular sailing areas. While destinations are geared to adventurers, the itineraries are not those of more rugged exploration cruise lines. In the past Windstar sailed mainly in Europe and the Mediterranean (winter and spring) and in the Caribbean and Central/South America (summer and fall), along with weekly cruising in Tahiti year-round. While the emphasis remains on warm-weather sailing, Windstar now ranges far and wide. Its 15 new itineraries slated for 2017–2018 include cruises in Japan, China, Thailand, the Philippines, South Korea, Borneo and Vietnam. Windstar will also sail through Arabian waters out of Dubai, reaching ports in India and Egypt. Together with these eight new sailings in Asian and Arabian waters, Windstar will add seven new itineraries in the Caribbean, Costa Rica and Panama.

Moreover, for the first time in two decades, Windstar will deploy a ship to Alaska. From May to August in 2018, the Star Legend will conduct eight 11- to 14-day cruises on routes between Vancouver and Seward. The ship is small enough to cruise through Misty Fiords National Monument and Kenai Fjords National Park, and all cruises will transport passengers through the pristine waters of Tracy Arm Fjord. Each sailing includes add-on land excursions that enable passengers to explore Alaska’s vast interior as well.

Whatever the destination, Windstar promises a yacht-like cruising experience with big-ship amenities. Sailings are personalized, fine dining is the rule, and even the bridge is open for passengers wishing to converse with captain and crew while underway.