On my week aboard Octantis, I recognized the Scandinavian design and luxury amenities I’d experienced on other Viking vessels. But Octantis has two major additions: a fleet of expedition watercraft and a 380-square-foot Science Lab where scientists conduct research in partnership with institutions such as the University of Cambridge Scott Polar Research Institute.

While this real science goes on, interested passengers engage with the science team through lectures, on tours of the lab and while lending a hand with research. Some on my cruise signed up to assist in the study of microplastics gathered from lake water off U.S. and Canadian shores. 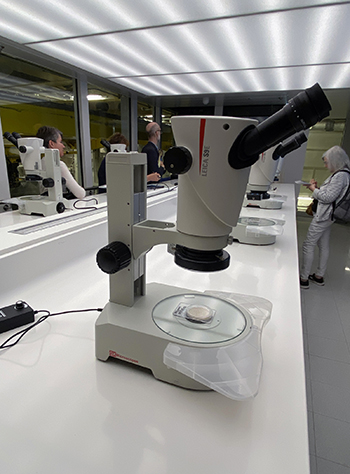 Octantis is an official NOAA/National Weather Service station, the only one on a civilian vessel. One morning, I joined passengers on the ship’s top deck to witness the launch of a weather balloon. Afterward, we scurried down to Deck 2 and gathered around a big screen in Expedition Central where data from the balloon’s radiosonde transmitter downloaded wind conditions, air pressure and temperature as it soared more than 18 miles into the atmosphere.

Both the science team and passengers make use of the ship’s expedition toys. Two yellow submarines, nicknamed Paul and John after The Beatles (George and Ringo will reside on Polaris), take six passengers and a pilot on dives to explore the deep; no extra charge for Octantis guests. Two high-speed Special Operations Boats designed by the military — and costing $1 million each — launch from inside The Hangar, an in-ship marina opening from a hatch in the aft, a first in the cruise industry. The Hangar also houses 15 two-seat kayaks and 17 Zodiacs. The science team uses Zodiacs to deploy baited fish icicles to attract and record marine life, part of a research study with University of Western Australia. Wherever Octantis cruises, sensors called FerryBoxes are lowered from the ship to sample sea and lake water and send data on oxygen levels, salinity and temperature to Akvaplan-niva research institute in Norway.

Expedition cruising often has meant roughing it in some of the most remote places on earth, but Hagen disputed the idea that “expedition ships should be uncomfortable, that you should be slumming it.” Instead, he said Viking’s expedition ships hold true to the company motto: Exploring the world in comfort. The result is a working research vessel with 5-star cruise amenities. “Luxury means so many things to different people,” said Hagen. “Luxury is simplicity in my mind.”

On this and Viking’s other ships flying under the Norwegian flag, interior designers employed the clean, simple lines of Scandinavian design with an emphasis on minimalism and functionality.

Octantis can accommodate up to 378 guests, more than Viking river ships, fewer than its ocean vessels. It’s the largest passenger ship on the Great Lakes, but still slender enough to fit through locks and small enough to access remote areas. All 189 staterooms are outside and in six categories ranging from 215–1,238 square feet. Most have what Viking calls “Nordic Balconies,” floor-to-ceiling windows that can be lowered to create a chest-high viewing platform. Bathroom floors are heated. A heated closet can be used to dry wet expedition gear, a handy feature on polar expeditions. 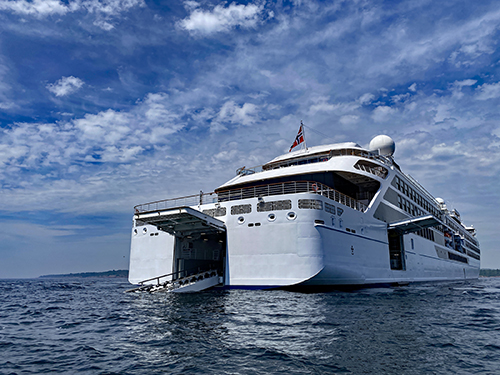 Public spaces are filled with more than 150 pieces of art, some replicas acquired through an arrangement with Munch, the Oslo art museum of Edvard Munch works. And books, lots and lots of books in the Living Room, the Explorers’ Lounge, in staterooms and in The Library where the collection was curated by University of Cambridge and London bookstore Heywood Hill. Hardcovers also line shelves in The Hide, a lounge playfully tucked away on Deck 1 forward showcasing artifacts of Octantis godmother Liv Arnesen, the first woman to ski solo to the South Pole.

Films and lectures fill the screen in The Aula auditorium inspired by University of Oslo’s ceremonial hall. The screen retracts to reveal a two-deck-high, 270-degree view from the aft. The Nordic Spa has some unusual features in addition to a salon, sauna and steam room: a cold-water bucket shower, a grotto where snow falls from the ceiling and a badestamp hot tub opening to the outdoors. The indoor spa pool is larger than the three small pools on Deck 5 — hot, cold, warm — with an indoor/outdoor pass-through.

Though my cruise was sold out, plentiful lounge space meant it never felt crowded. On chilly days, passengers who prefer to be outdoors relax in comfort on heated couches ringing lava-rock firepits on The Finse Terrace. The light-filled Aquavit Terrace has a bar and both indoor and outdoor seating. The only public space that disappointed me was The Nordic Shop, an often-closed, tiny space with little inventory.

When it comes to dining, passengers who have taken Viking ocean cruises will see similarities in restaurants and cuisine. I loved Manfredi’s Italian dishes and managed to snag reservations four times during my week aboard, including one in its private dining room. The other reservations-only dining spot, The Restaurant, did not disappoint with its regional and Scandinavian cuisine.

The World Café became my go-to spot for its breakfast and lunch buffet, its sushi and seafood bars, and its grill where I perused cuts of meat from a display case before choosing one to be cooked to order. Mamsen’s, named for the Hagen family matriarch, is a casual spot for Norwegian specialties, including waffles and open-faced sandwiches.

Lest anyone go hungry, Octantis has room service and a bakery, both available around the clock. Octantis spends the Northern Hemisphere summer in the Great Lakes and winters in Antarctica. To close the distance, it offers Grand Journeys, including Longitudinal World Cruises of 65–71 days and shorter voyages along North and South America. Octantis is particularly adapted to the Antarctic with an ice-strengthened polar-class hull as well as fin and U-tank stabilizers to make crossing the Drake Passage, or any rough water it encounters, more comfortable. When in dynamic positioning mode, the ship hovers in place rather than bobbing at anchor so passengers find it easier to transfer between the ship and its small watercraft. Forgoing the anchor also spares scarring of the sea bed.

Here’s what Octantis doesn’t have: kids, formal nights, butlers, smoking, casinos or photography sales. Fares for Antarctica cruises start at $13,995 for 13 days; Great Lakes from $5,995 for eight days. Those rates include beer, wine and soft drinks on board at lunch and dinner, at least one shore excursion per port, the loan of expedition gear as needed, WiFi when available, use of the onboard launderette and access to the spa and specialty restaurants.