Transformation of a City

PITTSBURGH WILL ALWAYS BE STEEL CITY, but future generations will also know it as a hub for robotics, artificial intelligence and similar technologies, thanks to a shift that began decades ago when the steel industry collapsed. Out of necessity, slowly but steadily, the economy became less reliant on blue-collar industries and more so on white-collar ones like finance, health care and technology.

“The transformation is something people have to see,” said Mark Thomas, president, Pittsburgh Regional Alliance. “Pittsburgh has retained its character and culture and is building on its phenomenal legacy. It may have missed the skyscraper era, but it’s fast-forwarded to what will impact the next century.”

Robotics, AI and autonomous vehicles fall under the umbrellas of those six categories, but so do countless products, processes and services most people take for granted or aren’t even aware of. It’s no wonder technology is the fastest-growing industry in Pittsburgh and accounts for roughly 23 percent of its overall workforce.

“A lot of people think of tech being just hardware and software, but it is so much more,” said Jonathan Kersting, vice president of communication and media, Pittsburgh Technology Council.

Even nontechnology industries in Pittsburgh, such as finance and education, often support the industry. For example, PNC Financial Services, a Fortune 500 company headquartered here, specializes in financing technology equipment, and several of the area’s top universities, such as Carnegie Mellon University and the University of Pittsburgh, offer renowned technology and engineering programs.

In fact, without CMU, the technology industry in Pittsburgh might not be the economic force it is today. The university was one of the first in the nation to offer a computer science program; the first, in 1979, to offer a Ph.D. in robotics; and the first to offer an undergrad program in AI. Additionally, CMU attracted robotics pioneers like William “Red” Whittaker to Pittsburgh and, with them, investment capital.

Startups have since flourished. Some, like Argo AI, are backed by major corporations. (In Argo AI’s case, Ford Motor Co. committed $1 billion in 2017 to help fund its work on autonomous vehicle technology.) Other startups have been acquired outright by companies like Yelp, Delphi Automotive and IBM, all eager to invest in future technologies. Either way, many of these companies reside near the Strip District in what’s come to be known as Robotics Row.

Not to be left out, some tech giants moved into the market. Amazon recently added 125 new jobs to its Pittsburgh Tech Hub, and Facebook invested $15 million in a new AI lab here. Similarly, Uber has a division on Robotics Row, and Google, Bossa Nova Robotics and Microsoft have offices in the city. The influx demonstrates Pittsburgh’s influence in robotics and AI.

“At the end of the day, Pittsburgh is in the top three, if not at the top, for robotics in the world,” Kersting said.

Yet despite local universities churning out graduates with robotics, AI and advanced technology degrees, Pittsburgh’s tech businesses struggle to find people capable of the specialized, cutting edge the city is known for. Locally headquartered Duolingo even recently purchased a billboard along California’s U.S. Route 101 imploring San Francisco tech workers to consider relocating. It read, “Own a home. Work in tech. Move to Pittsburgh.”

Both the Pittsburgh Technology Council and Pittsburgh Regional Alliance are trying to get the word out, especially to millennials, that Pittsburgh has opportunities they won’t find anywhere else. Not only are there jobs, Thomas pointed out, but Pittsburgh has nine county parks spanning 12,000 acres; miles of riverfront trails; four Carnegie museums; and a sophisticated food scene. It’s also a leader in sustainability and green initiatives, boasting 378 LEED-certified buildings.

However, to reach its potential, the city needs more than just tech gurus; it needs access to the world. Pittsburgh International Airport has taken the first step and is in the midst of a $1.1 billion new terminal project that will allow it to handle more air traffic more efficiently. But the Pittsburgh Airport Innovation Campus, scheduled to complete its first phase in 2020, promises an even bigger impact as a foreign trade zone.

The designation allows foreign companies relief and exemptions from certain duties and tariffs, making it easier and more affordable for them to do business in Pittsburgh. When complete next decade, the 195-acre campus will feature office space, research and development laboratories and industrial manufacturing space.

Progress does hinge on acquiring the necessary talent, though. Tech companies can’t grow if they can’t hire enough of the right people, Kersting said. He hopes they’ll find those people.

“I’d like to see the tech companies here grow and open offices around the world,” he said.

SCENIC DRIVES
You don’t have to drive far to leave Pittsburgh’s technology, robotics and artificial intelligence behind. Head south on I-79 to U.S. Route 40, the nation’s first federally funded interstate highway. From there, drive east past Fort Necessity and two historic toll houses, or go west, crossing the Ohio River and continuing to Columbus.

The Ohio River Scenic Byway offers another option. Begin in East Liverpool, Ohio, and continue on Highway 7, winding along the river and through forests. If you have several days, you can drive all the way to Fort Defiance State Park in Illinois. Otherwise, turn around halfway through your day. 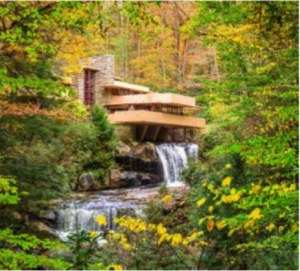 Fans of famed architect Frank Lloyd Wright won’t want to miss the Laurel Highland Scenic Byway. Take State Route 711 south from Seward, stopping at Fort Ligonier, to Normalville. Then continue on State Route 381 to Wright’s masterpiece, Fallingwater. Tours of the home, now a UNESCO World Heritage site, operate every day except Wednesday, March through the end of December. You can end your drive there or continue seven miles south to another Wright home, Kentuck Knob. Wright at Polymath Park, the site of two more Wright-designed homes, is also in the area. Book tours online before you head out for the day.

An expected feature in many cities, hotels and attractions, many gift shops today are predictable, selling the same items with nothing unique or special. Some hotels across the world have set to redefine what it means to be a gift shop, bringing gift shops to the next level by incorporating local communities and the influence of the region into each product.