The Resort at Longboat Key Club

RANKED CONSISTENTLY AS A BEST place to play by Golf Digest, The Resort at Longboat Key Club offers 45 holes of golf, including the Links on Longboat and the Harbourside Course, the latter featuring a multitude of trees as it snakes along Sarasota Bay. You can enjoy a decent golf trip with the ability to play both courses.

Harbourside consists of three nine-hole courses: the White Egret, the Red Hawk and the Blue Heron. Unfortunately, the Blue Heron was closed to play the day we teed up. The pro and starter were disappointed we would not experience what the club’s website calls “our famous ‘Blue Heron.’” But the White Egret (measuring 3,342 yards) and the Red Hawk (measuring 3,314 yards) did not disappoint. Between the water, the trees and the wind that blew at 30 mph at times, there is little margin for error.

I teed up with Paul Gosselin for a fun afternoon of competitive golf and dinner at Portofino Restaurant. The course is available for guest play only — what a grand excuse to stay at the resort and enjoy all its amenities, including six restaurants, a spa, tennis and spectacular beaches.

HOLE 1 | 372 yards, par 4
A great starting hole, and we were ready for action. Both Paul and I made near-perfect drives, Paul’s passing mine by about 30 yards. The only concern off the tee is a small pond with trees on the right and a sand trap on the left ready to catch any decent drive on that side. I landed dead center but still had a long way to the green and over-clubbed my shot, landing past the cart path behind the green. A decent wedge got me back in the game, much to Paul’s shock, for a gimme for par. Paul did catch that trap and came out like a champ, landing on the green. Unfortunately, the dreaded three-putt forced a bogey. 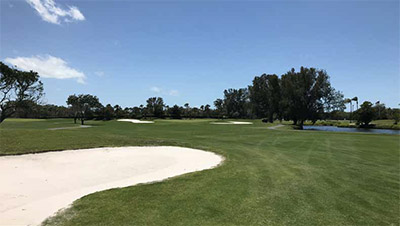 HOLE 4 | 516 yards, par 5
This hole forever will be named “Paulie Coconuts,” as Paul’s drive off the tee, strong and powerful, veered right and bounded into the palm trees lining the fairway. The ball rolled to the right of the trees and returned back left, stopping inside the trunk of a palm. Of course, I thought this was hilarious; even though my drive was far shorter, it was in play. Paul took an unplayable penalty and shot the ball back into the fairway, no easy feat. My drive stayed center, and I just had to keep the ball in play with my 3-wood to have a decent shot onto the green. With both of us within striking distance, we landed on the green and both two-putted — resulting in a par for me and a bogey for “Paulie Coconuts.” A nice recovery for a difficult situation and, of course, a new nickname for life.

HOLE 7 | 392 yards, par 4
As the course turned back toward the clubhouse, the gusting wind totally changed the level of play. We stopped at the tee box for a selfie as we had caught up to the group ahead. Cigar lit and in the process of taking the picture, my hat flew off and my cigar went airborne, nearly burning Paul in the process. We were ready for the tee shots as the wind pushed us and affected the flight of our drives. My ball landed dangerously right and kept bounding, nearly rolling in the water lining the right side of the fairway. This seems to be a common result at Longboat: Good drives bound beyond expectations, often landing in hazards or among coconuts. Paul killed a drive going left and long and in play, affording him a decent shot to the green for a par. I, on the other hand, could not keep my ball in play, my second shot bounding into the drink.

HOLE 4 | 386 yards, par 4
As we approached the fourth hole, we were on top of the group ahead of us which was playing slowly. We teed up and shot down the narrow fairway featuring a small grove of trees and a waste area on the right (adjacent to a pond) and a house and more trees on the left. I ended up in the waste area, and Paul hit a monster drive, landing close to the group in front. One of the players was waving his arms in the air, and I thought he was upset about our close proximity. We played out, each carding a bogey, and I went to the group to apologize. On the contrary, they were trying to tell us about the crow that took their ball and flew away. (After the game, at the Tavern & Whiskey Bar, this became a topic of conversation with visitors from the U.K. who frequently witness the famous ball-stealing crows at Harbourside.) The foursome kindly let us play through after we enjoyed their crow story.

HOLE 7 | 178 yards, par 3
Hole 7 requires a little mental play, as this fairly long par 3 features trees right and left and a narrow opening. It should not affect the flight of your ball, but I clipped a branch on the left side, landing in a forward bunker. Paul overshot right, landing beyond the green. I was able to pull out a shot to the green from the bunker, and Paul did the same from his right-side position. What should have been par putts ended in a pair of bogeys.

HOLE 9 | 350 yards, par 4
Our closing hole did not disappoint. Although we did not display our best play, we had a great time as we struggled through the strong winds. The fairway for 9 is wide open, so I decided to take full advantage, hitting my ball left, landing on the slope of a bunker nearly in the other hole’s fairway. Paul went right, and we split up to take our respective clubs and shots. I was close enough to nail the green, but the uneven lie sent my ball higher and right, under some trees and among some hardpan soil that made my chip more difficult. Paul also had issues, and we landed on the green, walking away with a bogey for Paul and double bogey for yours truly. It was time to hit the showers and have a Guinness at the tavern while chatting with locals and visitors about our day playing the Red Hawk and White Egret and, of course, the crows and coconuts!

The Resort at Longboat Key Club