The Lodge & Spa at Pico Bonito

INTERNATIONAL HEADLINES have rarely been kind to Honduras. There’s simply no getting around it. What people forget is that news is news because it’s surprising or unexpected. We may see certain headlines repeatedly, but these snapshots rarely reflect everyday life, and they certainly have little do with a place like Pico Bonito National Park in northern Honduras, where The Lodge & Spa at Pico Bonito has operated since 2000.

I visited in 2016, landing on a steamy afternoon in San Pedro Sula. You may recognize that name from lists categorizing the world’s most dangerous cities. No, it’s not Tokyo — frequently ranked the world’s safest city — but it’s not as if Catrachos (Hondurans) are eyeing tourists at the airport. They have better things to do.

Instead, coming in and out of San Pedro Sula was a breeze. I grabbed a baleada from the food court — a staple of the Honduran diet usually consisting of eggs and meat wrapped in a flour tortilla — and swiftly boarded the shuttle from The Lodge & Spa at Pico Bonito for an uneventful three-hour drive along the freeway to Pico Bonito National Park.

Stepping out of the shuttle and onto the gravel paths, it’s easy to see upon first glance why National Geographic Traveler named this one of the world’s top 50 eco-lodges. Twenty-two cabins of approximately 400 square feet each surround the jungle property in a scene that mixes a rustic birder’s paradise with 5-star sensibilities.

The highlight was, of course, the recently unveiled 3,675-square-foot spa with rituals dating back to the pre-Hispanic indigenous population’s healing culture and traditions. Three circular cabins anchor the jungle space, used for individual or couple’s massages; a Vichy shower; and, my personal favorite, the temazcal sauna with an adjacent plunge pool.

My experience kicked off at the temazcal sauna with the Gentle Toucan offering. A young woman, the spa manager, walked a small group of travelers and me through the initial rituals to begin the experience and how to enter the sauna itself.

Unlike modern saunas, the temazcal (the Nahuatl word for “house of heat”) variety is usually a domed structure, representing the womb of Mother Earth. The idea is you go in and come out reborn from the experience — sans the birth trauma, of course. 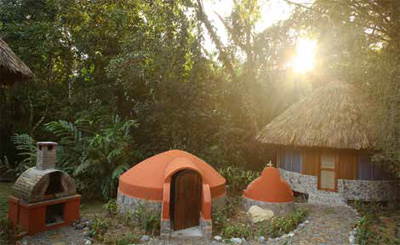 While temazcals are typically constructed with volcanic rock, The Lodge & Spa at Pico Bonito appeared to take some modern design liberties on the dome. For instance, the entry was through a large, thick wooden door that reminded me of the kind I had seen across colonial Central America when I lived there just a year earlier. Antigua, Guatemala; and Suchitoto, El Salvador, came to mind.

We removed our white robes (with swimsuits underneath) and were guided in carefully, one by one, shuffling in backwards to show our respect. Of course, if you show too much respect, you might come dangerously close to the hot pile of rocks in the middle, as I did. From there the instructions were simple: Sit and inhale the vapors through your nose and relax. As we did this, the door was closed behind us, shutting out the evening light.

Our group took turns pouring water over the hot rocks and taking the three deep breaths while carefully hovering above the steam. If we felt so inclined, which I did, there was a small bowl with “therapeutic lavender-infused mud” from the area. When rubbed on skin, it becomes soap-like and runs smoothly across the body.

None of this is usually my cup of tea, but I have to say I loved it. Within a short time I had a glistening layer of sweat and the relaxed, rhythmic heartbeat of someone in deep sleep. I’d lost track of time when the moment came to throw our robes back on and shuttle out of the sauna. Then it was onward to the outdoor shower to wash away the sweat and mud.

Later in the evening I had the opportunity to enjoy a massage. Due to limited space and time, an agreeable traveler within our group and I shrugged our shoulders indifferently when asked to share the couple’s room. In retrospect, I’m glad I did, if only to get a genuine sense of how the massage affected someone else. Indeed, if his snores were any indication, the massage did the trick.

As I said, this is not usually my scene, but if someone wants to spend an hour working out my kinks and making me feel incredible, more power to her. Give this hero an award. On this occasion, only the second professional massage of my life, I was matched with a quiet, young Catracha from the area. (Most of The Lodge’s staff are local hires from the La Ceiba area just 10 miles outside of the park on the Caribbean Sea.)

The calming ambience coupled with her clearly skilled hands sold the experience. As in the temazcal, I had lost track of time when she murmured in Spanish, “You can get dressed now.” Meanwhile, my comrade in comfort remained out like a light. How his masseuse continued without giggling through his snores is beyond me, but it’s a testament to her professionalism. Admittedly, we all chuckled a bit when, as his session ended, she gently tapped him several times to wake him up and he snapped back to consciousness so hard his legs flailed backwards into the air and his head shot up as if someone just gave him a shot of adrenaline.

Yet despite such a seemingly violent reaction, it didn’t appear to register as he smacked his lips together a couple of times, strained to open his eyelids and said, “Is it already over?”

The Lodge & Spa at Pico Bonito