For New York residents Pauline and Chris Walsh, 13 consecutive years of vacationing on the northwest coast of Puerto Rico means forging new friendships not only with other vacationers but also with local residents, including starting an annual softball tournament between Chris’ Staten Island softball league and softball teams in the town of Isabela.

“We have been in love with Villas del Mar Hau and that side of the island ever since 2003, when Chris and I first visited,” Paula said. “That first year the road from Jobos Beach to Montones Beach in Isabela, on the northwest coast where the resort is located, was a dirt road. Now it is paved, with guardrails and a biking and walking path. This part of Puerto Rico never fails to amaze us with its beauty and laid-back atmosphere; we are definitely thinking of retiring here for a few months a year.”

For many couples and families, especially surfers from around the world, western Puerto Rico makes a great place for a weekend or a month of kicking back. Dress is casual even at the most upscale establishments, and a perfect morning may be spent snorkeling or surfing in the warm Caribbean followed by lunch at a beachside restaurant right on the sand, nestled under palm trees. Fried pork chops, rice and beans and a cold beer are always available, as are fresh fish and seafood, and don’t be surprised if no one — customers, servers and cooks alike — is wearing shoes.

To try surfing in Isabela, head to Playa Shacks, where the Hang Loose Surf Shop offers plenty of boards for rent and the sea is calm enough for beginners. Afterward, drive just seven minutes to Jobos Beach for lunch at Sonido del Mar, an open-air restaurant with a terrace just steps from the sea, offering delicious coconut mojitos, shrimp and lobster. 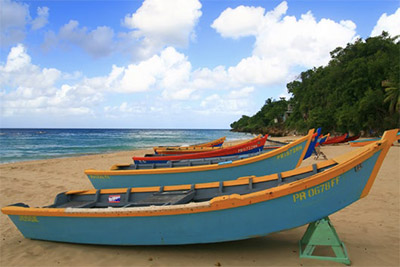 Rincón, about 45 minutes from Isabela, hosted the 1968 Surfing World Championships, and the area has maintained its reputation as the surfing capital of the Caribbean. Especially from November to March, big-wave beaches on the Sunset Coast north of Rincón — Spanish Wall, Indicators, Maria’s, Tres Palmas and Domes — fill up with surfers from all over the world who appreciate the reef breaks and long, fast waves. During winter some of the waves reach 25–30 feet. Several surfing tournaments take place here each year, and the breathtaking orange sunsets dazzle visitors on these west-facing beaches almost every day. Rincón’s Desecheo Surf and Dive Shop rents equipment for snorkeling and surfing, while Taino Divers arranges charter boats for offshore snorkeling, diving, fishing, whale-watching and sunset cruises.

Rincón, founded in 1771, is busiest in winter, peak season for surfers and sun-starved mainlanders, but all the beach bars, outdoor cafés, boutiques, art galleries, surfboard and scuba rental outlets, hotels and food markets remain open year-round, giving Rincón a safe, youthful and vibrant energy. Check out the Rincón lighthouse, rebuilt in 1922 after an earthquake destroyed the original 1892 Spanish-built lighthouse, situated in a park with great views of Domes Beach and nearby Desecheo Island. It also affords a great place to see whales if the timing is right. Every winter, from mid-January through mid- March, humpback whales gather offshore to rest, mate and care for their young before heading back north.

Enjoy the cuisine and views of western Puerto Rico with lunch or dinner at Rincón’s Tamboo Seaside Grill. Tamboo, a five-minute drive from the Rincón lighthouse, takes full advantage of its location on a surfing beach, with a two-level deck atop sand dunes and surrounded by palms. The adjoining Tamboo Bar, often listed in “Best Bars of America” rankings, offers live music and cold beer.

For two nice excursions from the Rincón area, head 15 miles east to Moca, named after a tree that blooms yearround with pink and purple flowers. The hilly countryside town is famous for its lace and its lovely pink church, Parroquia Nuestra Señora de la Monserrate. Just 30 minutes south of Rincón explore Mayagüez, Puerto Rico’s third-largest city. Without a nearby swimming beach, it’s not really a tourist town but proves a good place to see elegant Spanish architecture, including Plaza Colón; La Alcadia (City Hall); the Art Deco Teatro Yagüez; and Barrio Paris with its bars, bistros and bookstores.

During the past year, Puerto Rico’s gorgeous natural attractions — beachfront sunsets, lush tropical countryside, glittering Caribbean Sea and even its elusive fluorescent hanno blue butterflies — have been overshadowed by news reports about the prevalence of the Zika virus and the island’s severe economic conditions.

Ingrid I. Rivera Rocafort, executive director, Puerto Rico Tourism Co., said these troubling situations caused a drop-off in tourist arrivals this spring but picked up again as summer began. On the other hand, Puerto Rico’s meetings and convention business took a hit, with 41,000 room nights canceled going forward two years — a $28 million loss for 2016 through the end of 2017, revenue the island can ill afford to lose.

Because of the island’s struggling economy, residents are leaving at an alarming rate. The Puerto Rico Healthcare Crisis Coalition estimates 3,000 doctors left Puerto Rico since 2010, in addition to the many thousands of non-professionals who move to the U.S. mainland every month in search of employment. In the past five years, Puerto Rico suffered a population slide steeper and more financially disastrous than in any U.S. state since the end of World War II.

For Chris and Pauline Walsh, the Zika outbreak caused no worries. “We were not concerned with getting Zika,” said Chris, who did not cancel the Isabela softball tournament this past spring. “None of the folks on the softball team in New York cancelled their trip, but we know that many visitors did, which is really hurting the Puerto Rican economy.”

The silver lining: Beaches and attractions are less crowded than usual; and although hotels are not officially offering discounts, properties may be willing to upgrade rooms or add amenities as a thank you for visiting their island.

Where to Stay in Puerto Rico

The Hotel AMERON Zurich Bellerive au Lac, forged from the collaborative efforts of interior design firm Monoplan AG and other cutting-edge design firms, bills itself as a celebration of the 1920s and ‘30s aesthetic. The story behind it is compelling as the building dates to 1928 and has connections with the early days of Switzerland's movie industry. However, there are several fun Mid-Century Modern and late 20th-century design touches in the public and private areas. Clearly, it's going for the "modern luxury" vibe Millennial and Gen-X business and leisure travelers look for when seeking a quality smaller property with a great location.