Premium Economy Soars in Popularity and Profitability for Airlines

Each year our Class Act features an article similar to this, taking a look at the premium economy cabins on airlines around the globe, comparing and contrasting seat specifics and amenities. What was once a matter of which airlines offer the “in-between” cabin is now a matter of which airlines do not boast the now much more commonplace premium economy class.

According to a March 2020 Airline Passenger Experience Association report, it could all come down to a matter of money — both for the passengers who, for a little extra green receive a far more premium experience, and for the airlines. The article quotes Harry Hohmeister, head of commercial passenger airlines, Lufthansa Group, as saying premium economy is a “money-generating machine,” bringing in 33 percent more revenue per square foot than traditional economy and 6 percent more than business class. The sentiment was echoed by Robert Isom, president, American Airlines, in a 2019 earnings call, with premium economy dubbed the “most profitable use of square footage on wide-body aircraft.” 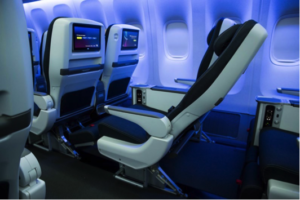 With the financials in mind, airlines now add more premium-economy seats to new aircraft configurations: Qantas bumped the number of premium- economy seats on its Airbus A380 from 35 to 60, British Airways increased its number on the new A350, and Singapore Airlines eliminated economy class entirely on its A350, opting instead for a two-cabin configuration of premium economy and business class.

Of course, holdouts remain, such as Korean Air and Qatar Airways, who tout an already-generous and more-comfortable-than-most economy-class cabin. And you have airlines that reverse course, such as Turkish Airlines, who added and offered Comfort Class in 2016 only to remove the cabin that same year. And then there are the surprises, as when one of the holdouts created industry buzz last year with the announcement of a premium economy cabin: Emirates.

The cabin would be the first of its kind among Middle Eastern carriers and was big news … and then came COVID-19. Much uncertainty surrounded the details of the cabin, and now as a result of the pandemic, the debut date is a question mark as well. While originally slated to launch in June 2020 with the delivery of the Boeing 777X, it was pushed back to the end of 2020 with the arrival of new A380s. Now, as of June, Emirates still plans to debut the cabin but at an unknown, delayed date and on a slower rollout. Plans to retrofit existing aircraft with the new cabin have also been scrapped.

Mystery shrouded the specifics of the cabin from the beginning. In April 2019 HAECO Cabin Solutions announced its Eclipse Cabin as well as “an as yet unnamed Middle East-based airline” as its launch customer.

Tim Clark, president, Emirates, was also less than forthcoming with details, describing the cabin as a “superette” design that would cradle the legs in a “lazy-Z format.” The few details available, though, certainly made the premium economy cabin sound attractive.

There’s no denying the COVID-19 pandemic changed the landscape of travel, and some uncertainties still loom. As the current focus of all airlines, hotels and travel providers is cleanliness, safety and the health and well-being of consumers, announcements and new product launches are on the back burner; and dates and deadlines are fluid, delayed and to be determined. Just as the world waits on a more realistic timeline for the debut of Emirates’ premium economy cabin, we can only wonder what will come of the February 2020 announcement by Pieter Elbers, CEO, KLM Royal Dutch Airlines, that the airline will introduce a premium economy cabin within a year. KLM currently offers an Economy Comfort option, with about four additional inches of legroom and one to two extra inches of recline but with much the same service as economy. Elbers offered no further details on what would differentiate the new premium economy cabin, but headlines proclaimed this means KLM would finally boast a “proper” premium-economy option rather than a heightened, slightly more comfortable economy-class option.

In 2019 Swiss International Air Lines announced plans to debut a premium economy cabin in spring 2021, marking the last airline of the Lufthansa Group to do so. Again, it remains to be seen if the world’s current situation will allow for an on-time unveiling of the cabin, slated to first appear on the Boeing 777-300ER, but details of the almost $44 million investment include 24 seats in a 2-4-2 configuration that offer 10 percent wider seats, 20 percent greater pitch and 25 percent greater recline.

With more and more airlines offering premium economy, it’s not just about the seat anymore. Sure, enhancing the seat’s pitch, recline and width always wins over new customers, but travelers are also enticed by an enhanced overall experience, beginning at check-in and through to deplaning. Airlines today make sure all of the premium-economy extras make the additional monetary output more than worth it, with most offering premium access all the way and upping the ante even more with bonuses previously reserved for first- and business-class passengers. “Glorified economy class” is no longer an apt description of this cabin.

On All Nippon Airways and Philippine Airlines, the premium economy cabins feature mood lighting to mimic the time of day and enhance rest and relaxation for travelers. For airlines like Japan Airlines, Virgin Australia and Air New Zealand, the seat width creeps over 40 inches, some of the most spacious seats in the premium-economy game. British Airways recently overhauled the culinary offerings for its premium-economy passengers, while Singapore Airlines extends its first- and business-class Book the Cook service to premium-economy travelers. Delta Air Lines brings a luxe touch with Tumi amenity kits and memory foam seats. On Qantas, calf rests deliver better ergonomic support for a more comfortable flight, and American Airlines’ partnership with Casper for bedding can also be experienced in its premium economy cabin.

The “in-between” cabin no more, it’s clear premium economy classes around the globe are soaring to the forefront of the flight experience.