REFLECTIONS OF FLICKERING lights in the sparkling River Seine, glowing sidewalks illuminated by 19th-century street lamps, and the romantic ringing of the bells of Notre-Dame from the central Île de la Cité: It’s no wonder Paris is considered the City of Lights, especially after work hours. The hardest part about a night out in the French capital is deciding where to spend your hours of enchanting night light. Each of the city’s neighborhoods, or arrondissements, carves out its own slice of divinity from sunset until dawn.

Begin in the 1st and 2nd arrondissements for a spot of open-air stall shopping along Rue Montorgueil, with stops to taste local cheeses and a pick-me-up cup of café au lait at one of the sidewalk restaurants. If the weather isn’t cooperating, opt for indoor shopping at La Galerie Vivienne in the 2nd. Browse home furnishings, fashion and gifts, and even get your hair done in this well-lit architectural marvel that feels like a page out of the Versailles guidebook. Walk two blocks to Frenchie, an apropos wine bar with small-plate pairings such as Mont-Saint-Michel cockles with ginger and lime or Kintoa pig backbone. 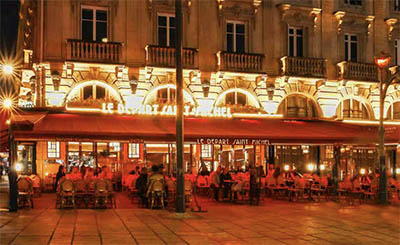 What’s a late afternoon in Paris without a succulent hour (or four) at a sidewalk café? At the deliciously decorated Du Pain et Des Idées, snack on luscious croissants or an escargot — bread coiled into a snail shape, topped with raisins and then baked — made by one of the city’s best boulangers. Arguably, the Parisian café experience isn’t about where you go but more about the ambience. Thus any café nestled in the Jardin des Tuileries or Jardin du Luxembourg will satisfy this cultural craving.

As the sun falls, venture to the 10th for an evening of live music at the New Morning Jazz Club, where there’s more than just jazz on the roster, or hop next door to Rue Oberkampf in the 11th, a neighborhood alive until the wee hours of the matin. Arrive early to secure a table at the no-reservations, no-menu restaurant from Top Chef France contestant Pierre Sang, followed by a night of darkness and dancing at Balajo on Rue de Lappe.

Round out the night with some bar or club hopping in the gay-friendly Marais district, where The Labo happy hour lasts until 11 p.m., and Le Tango hosts everything from cabarets to drag shows. Bonne nuit!