ROUND THE CLOCK, DAY AND NIGHT, Hong Kong buzzes with energy. Even New York pales in comparison. For first-time visitors the impact is utterly exhilarating. This restless city is undoubtedly Chinese and yet is also completely international. Most of the population resides in Kowloon, a tight-packed district on the mainland, and the even tighter-packed Hong Kong Island — which ought to make for an oppressively confining atmosphere; yet as you survey the dense skyline across pungent Victoria Harbour, limitless possibilities seem to open up.

Hong Kong’s dynamism is infectious. This freewheeling, free-trading territory — a British colony until 1997 and now a Special Administrative Region of China — has long been one of the world’s most important business hubs. With its outstanding facilities and wealth of attractions, I contend it is also one of the greatest MICE destinations.

The facilities for meetings, conventions and exhibitions are peerless. The flagship venue, the Hong Kong Convention and Exhibition Centre, prominently resides on reclaimed land jutting from the island’s waterfront. Originally opened in 1988, it completed the first major expansion in 1997 to coincide with the territory’s handover to China. (The formal ceremony took place here.) A second expansion, completed in 2009, resulted in a total of 990,000 square feet of rentable function space.

The HKCEC has been voted the best in Asia 13 times, and with its central location it continues to be a popular venue for high-profile international gatherings. A direct ferry service provides a convenient link to the Kowloon mainland. The center, best known for staging mega events for thousands of delegates, can also cater to much smaller meetings. It features a range of rooms and halls of differing sizes, many of which offer panoramic views of the harbor. 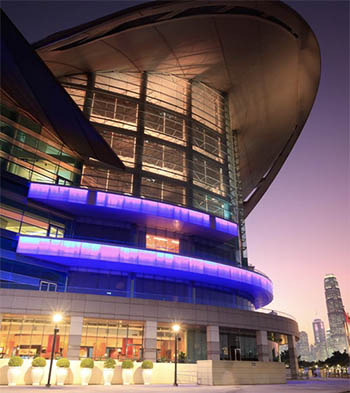 AsiaWorld-Expo, a 753,000-square-foot venue fully integrated with Hong Kong International Airport on Lantau Island, makes an ideal choice for one- or two-day international events for which delegates can swiftly fly in and out. By metro (MTR), downtown Hong Kong lies 28 minutes away (roundtrip about $7). Although less convenient for downtown than some other venues, AsiaWorld-Expo sits close to Hong Kong Disneyland and the Ngong Ping 360 Cable Car, which whisks visitors into the wooded hills of Lantau Island.

One of the newest venues is the Kai Tak Cruise Terminal, built on the disused runway of the famous old Hong Kong Airport and designed by Foster + Partners. As the name suggests, it serves primarily as a cruise ship terminal, but the building also includes dedicated MICE facilities with flexible indoor spaces of up to 32,000 square feet. A shuttle bus connects to the nearest MTR station, five minutes away.

The city offers a wealth of downtime activities, many of which can be tailored specifically for MICE groups. Among the latest attractions is the 200-foot-tall Hong Kong Observation Wheel, located on the island’s waterfront in Central District. MICE groups can reserve private VIP gondolas with a glass floor.

One of the most popular group outings takes visitors to the Peak, the mountain viewpoint directly above downtown Hong Kong on the island. The Peak Tram, a funicular railway, climbs from the hectic city streets, up the wooded flanks of the mountain to the distinctively shaped Peak Tower. In addition to offering outstanding views (on a clear day), the Peak Tower is home to the Hong Kong outpost of Madame Tussauds wax museum. (You probably won’t recognize many of the celebrities — Korean boy bands and the like — though you will find quite a few global stars and politicians.)

Although downtown Hong Kong is unrelentingly frenetic, it offers opportunities for respite. Up the narrow, bustling Graham Street in Central District, you’ll find SOL Wellness, a holistic center that offers sessions in yoga and meditation, sound and energy therapies, Ayurvedic consultation, aromatherapy and massage. The center provides a range of corporate wellness services to some of Hong Kong’s biggest companies, who recognize that in this dynamic city it is vitally important, from time to time, to relax and recharge.

Alongside Hong Kong’s abundance of conventional venues, there are plenty of offbeat options. Consider the futuristic Hong Kong Science Park, in a coastal setting in the New Territories region inland from Kowloon, midway between downtown Hong Kong and the mainland city of Shenzhen. The Science Park offers a range of spaces, from the large Grand Hall to more intimate meeting rooms.

In Central District on Hong Kong Island, the Police Married Quarters, or PMQ — built in 1951 to accommodate married policemen and their families — has been converted into a quirky, trendy culinary center. The venue boasts more than 17,000 square feet of event space ideal for exhibitions or private parties.

The coast of Hong Kong is speckled with 263 islands, many of which can be visited on a daytrip by chartered junk. (Strictly speaking, the term applies to a traditional Chinese wooden sailboat, though it now also refers to charter motorboats.) Plenty of charter companies offer a range of boats and activities, priced either by boat or, if fully catered, per person. Junks.HK, a one-stop search platform, helps to match you with the ideal package to fit your group’s needs.