Make Lasting Memories on an Expedition Voyage in Antarctica

As a travel journalist who has tallied visits to dozens of countries, I am often asked to name my favorite destination. I don’t think twice: Antarctica.

Experiences cruising along the bottom of the world stick in my memory. A penguin crawling into my lap. A ferocious-looking leopard seal preparing to torpedo our Zodiac raft. Sculpted icebergs bobbing in blue-green Crystal Sound below the Antarctic Circle.

As with most cruises to the White Continent, my voyage with Quark Expeditions navigated to the Antarctic Peninsula, an arm of rock and ice reaching north toward Tierra del Fuego at the southern tip of Argentina. A provider of polar cruises for 30 years, Quark Expeditions currently operates four ships in this part of the world, all expedition vessels carrying fewer than 200 passengers. Its newest, Ultramarine, acquired in April 2021, includes two helicopters for flightseeing and 20 Zodiacs for excursions and shore landings.

Cruise lines in Antarctica adhere to the strictures of the International Association of Antarctica Tour Operators, which promotes safe and environmentally responsible travel to this frozen land. Only expedition vessels and mid-size ships carrying fewer than 500 passengers may land on shore. Larger ships cruise along the coastline.

When my Chicago friends heard I was headed to the bottom of the world in the dead of winter, they questioned my sanity. Indeed, the February day I departed, the temperature had dropped to minus 8 degrees Fahrenheit (minus 28 with the wind chill). But because the seasons reverse in the Southern Hemisphere, Antarctica proved much warmer, ranging 34–52 degrees Fahrenheit during my 11-day trip. On several occasions, I strolled the deck without a coat. The sun set at 9:30 p.m., and twilight lasted long after.

We spent our time on board watching educational films and attending lectures from experts in glaciology, ornithology, marine biology and history. Morning briefings gave the day’s highlights and any changes in itinerary due to weather and ice conditions. Evening recaps allowed passengers to share their experiences and pepper the crew with questions about what they had seen.

Viewing wildlife without threatening it or its habitat ranks as a priority on an Antarctica cruise. We were told not to collect feathers, stones or any objects on shore and to leave nothing behind. Keep 15 feet between you and wildlife, we were warned, and stay farther from fur seals, which can be unpredictable. If a bird flies and cries overhead, you might be too close to its nest. 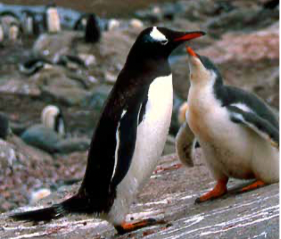 Our expedition leader advised us to let animals come to us, and one did on Half Moon Island. I sat on a rock watching a group of chinstrap penguins, marked by a black line of feathers running from ear to ear. One waddled over to me, climbed in my lap and cocked its head to peer up at me, perhaps wondering what this odd creature in a red parka might be. At Neko Harbor, dozens of gentoo penguins perched high above the shoreline, striking up a discordant symphony as parents and chicks called to one another. When they are nesting, penguins feed on krill and regurgitate the food into the mouths of their noisy, hungry offspring. Skuas and other marine birds dart overhead, waiting for a chance to snatch a morsel. 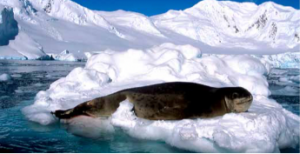 Zodiacs took us on sightseeing excursions where penguins leaped from the water around us. Seals and minke whales torpedoed toward us, then dove below just out of arm’s reach. I heard a sound like gunfire followed by a whoosh and a roar as an iceberg calved from a glacier. Waves sent smaller bergs crashing into each other, tossing boulders of ice as if they were mere pebbles. Newborn icebergs might have blue or dark green streaks, a change in the density of the ice when compressed by the weight of the glacier over thousands of years. Wind, waves and collisions with other bergs erode them into fantastic sculptures, some with aquamarine tunnels and emerald caves. Around the bergs, our Zodiac cruised through crystal cubes bobbing in deep-blue water as if we floated in a tropical cocktail.

Back on the ship, someone spotted humpback whales about 40 yards away, spyhopping and breaching before a mother and young adult approached us. We lined deck rails on the port side to watch the pair swim slowly past, roll on their sides and look us directly in the eye. The playful creatures dove and reemerged on the other side of the ship, sending cheering passengers scurrying to starboard. This game of now-you-see-us, now-you-don’t went on for more than an hour as we ran from side to side.

These experiences packed plenty of adventure for me, but for those who want more, Quark Expeditions offers options for an additional fee such as sea kayaking, stand- up paddleboarding and overnight camping on shore while snug in a bivouac sack.

The Antarctic cruise season typically runs from early November to late March. Most cruises depart from Ushuaia at the tip of Argentina, though some passengers spend a day in Buenos Aires en route to tour its stunning architecture and absorb its rich history. In Ushuaia, passengers transfer to a downtown location where they might have time to explore this quaint port town before making their way to the pier.

Crossing the notoriously rough seas of the Drake Passage to the Antarctic Peninsula takes about 48 hours. As an alternative, Quark Expeditions has itineraries flying from Punta Arenas, Chile, and landing on Antarctica’s King George Island, thus avoiding the Drake and shortening the duration of the trip.

Quark Expeditions offers 12 itineraries to Antarctica, the Falkland Islands, South Georgia and Patagonia during its 2021–2023 seasons. Other expedition cruise lines in Antarctica can be found in the IAATO member directory at iaato.org, including Hurtigruten AS, Lindblad Expeditions, Ponant Yacht Cruises & Expeditions, Abercrombie & Kent and Hapag-Lloyd Cruises.

The newest addition to Noble House Hotels & Resorts’ elite collection is set to debut in early 2022 in Cabo San Lucas, Mexico. The hospitality brand’s first venture into Mexico, the $100 million reveal of Corazón Cabo Resort & Spa will include a new-build tower featuring 204 rooms and suites, the highest and most luxurious rooftop bar in Cabo, two infinity pools and fine-dining eateries.