Magna Pars-L’Hotel à Parfum, a six-minute walk from Porta Genova subway stop and tram hub serving as the neighborhood’s gateway, sparkles as its anchor. Unlike other 5-star hotels which have adapted their properties to fit the buildings they’ve taken over, the Martone family — one of the most important names in fashion and lifestyle not everybody knows, but should — has done the opposite by developing a hotel (part of the Small Luxury Hotels of the World) that’s not only inspirational but also aspirational on so many levels.

The structure is strikingly modern, and it’s probably no accident it looks a little bit like a high-tech greenhouse. It has several sexy, sustainable bells and whistles worked into it — from movement-driven lighting to water filtering, an art curation program and boundary-pushing cuisine at Restaurant DA NOI IN and cocktails at LIQUIDAMBAR. However, it also celebrates the building’s past as a perfume factory, with LabSolue as one of its marquee attractions along with the restaurant, working herb garden and rooftop event space. 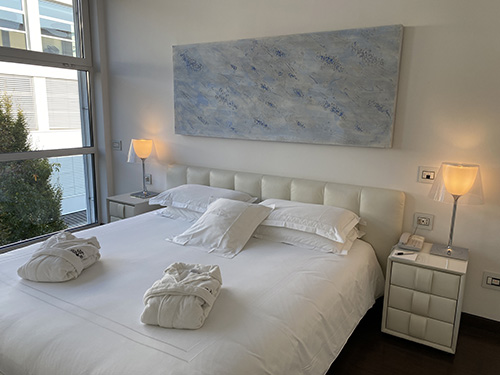 Inside the hotel, LabSolue is the latest chapter in the storied history of the Società per l’Industria Farmaceutica e Cosmetica Istituto Farmaco-Biologo, founded in 1945 by Vincenzo Martone, who would later win an Academy Award for his innovations in the industry. Future generations of Martones would expand the company to include Marvin, which launched in 1970 and established itself as a formidable contender to France’s one-time monopoly of the fragrance industry. Through the decades, fragrances for Gucci, Blugirl, Blumarine, Dsquared2, Gianfranco Ferré, Laura Biagiotti, Pomellato and Trussard, as well as its own Marvin line, were produced in the building.

Under the watch of Giorgia and Ambra Martone (third generation in the dynasty), the factory moved outside of Milan so the original building could be repurposed into the ambitious hotel around 2013, which in turn, was revitalized and re-opened in 2021. The building’s legacy is gorgeously maintained in the LabSolue space, where individuals, families and corporate groups can have custom fragrances developed with an assist from the on-site perfumer. LabSolue’s alluring candles, reed diffusers and lush toiletries, meanwhile, are on full-sensory display in each of the rooms and suites. This is also testament to the Martone’s aptitude for brilliant marketing.

Other exclusive features include a garden courtyard flanking plots where several botanicals used in the perfumes are cultivated; a gym equipped with the latest Technogym machines; fitness classes; and the spa, all exclusively for the use of the guests. As the various lush, covetable fragrances would suggest, the 60 guestrooms and suites are inspired by botanical plants. They are open, airy and modern, either overlooking the fragrance garden or the Navigli neighborhood’s lively expanse of cafés and shops. The furnishings are both functional and fashionable to the point where you could stay inside the whole time and feel like you’ve experienced Milan as a local would. While there are some large, easily adaptable spaces, there’s also the Biblioteca, which holds some of the hotel’s most interesting artwork and serves as a living room for guests visiting with friends or hosting informal gatherings.