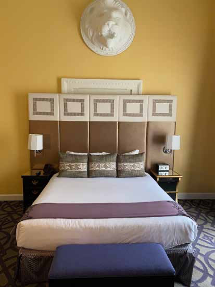 ARRIVAL/CHECK-IN: I took a leisurely drive from Philadelphia on a Thursday this past summer to visit Kimpton Hotel Monaco, the site we selected for the 2021 FXExpress awards (see the recap on page 36). The drive was easy, and travers- ing from the Baltimore–Washington Parkway to the hotel was simple. The property sits across the street from the National Portrait Gallery — close to everything but a few blocks from the National Mall, so traffic is not as congested. The hotel valet took my car and parked it in the hotel garage, as I would not need it for the rest of the day. It was great to just pull up in front and not have to worry about finding parking in D.C.

The hotel is a historic landmark designed by Robert Mills, who also designed the Washington Monument. The original building was completed in 1842 to house the General Post Office, which soon outgrew it. In 1855 Thomas Ustick Walter, also the designer of the U.S. Capitol dome, designed a new section. This construction was suspended during the Civil War. After the post office moved to a new location, the building housed many government agencies. It was designated a National Historic Landmark in 1971. The building stood abandoned from 1997 until 2002, when Kimpton turned it into the Monaco.

Check-in was swift and friendly. This was the period in July when Washington, D.C., dropped the mask mandate for vaccinated persons, so everything felt normal again.

GUEST QUARTERS: My room was on the third floor, and to get there I had to take the elevator and then walk into the other section of the hotel and down a wide hallway adorned with large shades hanging from the center, covering the lights. It made an impressive view. The entire building has very high ceilings, which helped keep the building cool before air-conditioning.

The large room had a king-sized bed to the left and a large lion sculpture above the bed to protect you while sleeping. To the right was a round glass-top table with chairs facing a built-in cabinet holding a flat-screen TV and a large bust of Thomas Jefferson. This made a good functional workstation, as I had to attend two Zoom meetings when I arrived. The table and the headboard had convenient power outlets and USB power sockets. Against the window sat an additional comfortable chair with a table/foot stool.

The bathroom was large with a tub/shower combo, a bowed shower curtain and great water pressure. Shampoo and amenities, by Atelier Bloom, were scented with basil, green apple and orange blossoms.

The room was comfortable, and the bed made for a perfect night’s sleep.

SERVICES/AMENITIES: I enjoyed dinner and drinks at Dirty Habit, the on-site bar and restaurant. There is also an outside patio, frequented by Washingtonians. Make sure you try the tuna tartare dressed with watermelon — it was out of this world! The following month we hosted our event in Kimpton Monaco’s Paris Ballroom, beautiful and full of history. A huge dome at the center lets in natural light; remember, this building was constructed nearly 40 years before cities were electrified. There is also another meeting space on the other side of the building, the Athens Ballroom — I am told both make great wedding venues.

Dirty Habit offers the feel of outside — it is all glass — without being exposed to the elements.

The location cannot be beat: a short walk to nearly everything in Washington, D.C.