HYDERABAD’S GREAT LEAP into the future began in the 1990s, you could say. That was when ambitious plans were initiated to create a state-of-the-art campus for IT and other emerging industries on a large site west of downtown. Twenty years on, HITEC City (as the campus became known) is a reality, helping rebrand this large, ancient city in southern India as “Cyberabad.”

But you can also look much further back for the roots of innovation here. Golconda Fort, mostly in ruins now on an imposing granite hill to the south of HITEC City, was originally constructed in the 15th and 16th centuries. From the start, this formidable fortress stood at the cutting edge of communications technology, using acoustics to magical effect. Clap your hands at the entrance portico and you will be heard in the hilltop pavilion more than half a mile away. Inside some of the surviving buildings, whispers carry from room to room. The early rulers of Hyderabad State — the Nizams — understood the power of communication.

Several ornate Nizam palaces are scattered throughout the city; one, the Falaknuma Palace, has been converted into a sumptuously luxurious hotel operated by Taj Hotels, set amid 32 acres of gardens. The hotel makes the perfect base, ideal for entertaining business contacts and a peaceful retreat from the hectic madness of the city streets at day’s end. 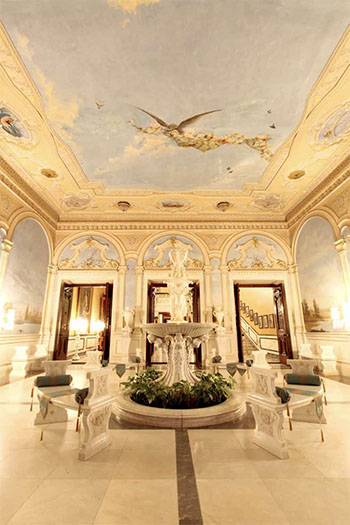 There is no better venue for a business breakfast than the Falaknuma’s Gol Bungalow terrace, with breathtaking views over the waking city. Make the most of the tranquility. The moment you leave the hotel’s manicured grounds, you plunge into the maelstrom of India’s fourth-biggest city.

In keeping with Hyderabad’s aspirations as a hub of global innovation, the city invested heavily in upgrading its transport infrastructure. A light rail network began operating in 2003, carrying almost 200,000 passengers every weekday. The road system has been modernized, with ring roads and more than 30 overpasses.

One of the cheapest and most convenient ways of getting around is by three-wheel motorized rickshaw, though it’s not for the faint-hearted. Indian rules of the road tend to be improvised, and near misses are a feature of most journeys, all the more intense in the back of a rickshaw, open to the elements on both sides. However, the heart-in-mouth moments are counterbalanced by the rickshaw’s ability to dodge between stationary traffic and negotiate the maze of narrow streets in the old city, often getting you to your destination quicker than by taxi.

If you’re not a curry fan, consider one of the city’s many international restaurants. Firewater Kitchen & Bar, located at HITEC City, serves a diverse menu that includes Western, Chinese and vegetarian options.

No matter how many times you alternate between old Hyderabad and HITEC City, the adjustment is always dramatic. The downtown streets present a riot of noisy chaos, Indian life at its most colorful and dynamic. And then, suddenly, you’re among broad, leafy avenues lined with tinted-glass high-rises. The contrast is symptomatic of modern India, where the 21st century coexists with sights and sounds seemingly unchanged for centuries.

Hyderabad’s most important landmark is the Charminar, an active mosque with four towering minarets. Constructed in 1591, the building now sits at the center of a busy intersection, with city life revolving around it relentlessly, day and night. You haven’t truly been to Hyderabad until you’ve passed through the shadow of the Charminar.

In the evening, you’re faced with the familiar dilemma for entertaining business contacts: curry or something else? One of the finest local options is Firdaus in the Taj Krishna Hotel. Open 7:30–11:45 p.m., the restaurant serves traditional Mughlai favorites under the guidance of renowned chef Nitin. Be sure to try Hyderabadi biryani, a mixed rice and meat dish, a local specialty.

Via Milano, located in the Jubilee Hills district between downtown and HITEC City, focuses primarily on pasta and pizza (as you’d expect from the name) but also serves an eclectic range of Western dishes, including English-style bangers and mash.

However you plan your day in Hyderabad, you will be buffeted by India, the old and the new, the sublime and the chaotic. Retreating to a palace is the perfect antidote to culture shock, the turmoil left at the gates. Floodlit, the Taj Falaknuma Palace looms ahead, a monument to serenity.