FROM THE LUSH FOOTHILLS of the Andes Mountains to the cacti-dotted deserts in the south and the vineyards along La Ruta del Vino, Salta Province in northwest Argentina is, in one word, beautiful. In fact, capital city Salta’s nickname, Salta la Linda, means “Salta the Beautiful,” a label some locals in Cafayate apply to their own town.

Located about 120 miles south of Salta via Route 68 in the Calchaquíes Valley, Cafayate is indeed beautiful. Rugged mountains serve as a backdrop to row after row of vines, with the occasional saguaro interspersed among the grapes. Grand bodegas — or wineries — entice visitors to stop for tastings in Cafayate proper and along Route 40 heading east and west out of town. Meanwhile, restaurants surround Cafayate’s central plaza, and tour buses stop in front of the daffodil-colored Catedral Nuestra Señora del Rosario.

Most visitors come for the wine. Cafayate, the second-largest wine producing region in Argentina, behind Mendoza, claims the title of highest-altitude wine region in the world, at 5,500 to nearly 10,000 feet above sea level. A dry climate; dramatic fluctuations between nighttime and daytime temperatures; and the intense sunlight, which thickens the grapes’ skin, combine to create bold, flavorful wines.

The region is best known for its Torrontes. Produced only in Cafayate, this varietal is usually bottled as a crisp, dry white wine similar to Albarino, although some bodegas produce a sweet version reminiscent of a Riesling as well. Malbec is the most popular red by far, but most bodegas also pour Cabernet Sauvignon and red blends made with Tannat.

Assuming you drive a rental from Salta on Route 68, you’ll begin seeing signs for La Ruta del Vino, the Wine Route, soon after leaving the capital city, but the first bodegas don’t appear until you travel more than halfway through the scenic Quebrada de las Conchas. Bypass these and focus instead on the area’s red rock formations, stopping at El Anfiteatro (The Amphitheater), Garganta del Diablo (The Devil’s Throat), El Sapo (The Toad) and the scenic overlooks.

Route 68 ends at Route 40, just a few miles west of Cafayate in the heart of the wine region. Head to Plaza Cafayate to orient yourself and stretch your legs. Driving in Cafayate can initially be nerve-wracking because of the many one-way streets and local drivers who don’t adhere to the concept of lanes. Watch for blue rectangles with white arrows painted on corner buildings to indicate street directions. 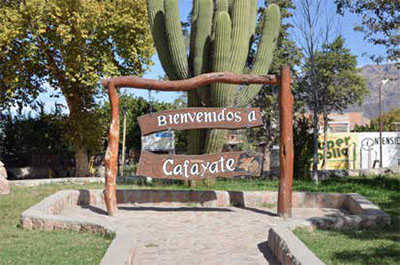 The plaza offers a good place for you and your significant other to sample empanadas filled with beef; quinoa; or humitas, a savory corn and cheese mixture, or to pop into a heladeria for a scoop of Malbec or Torrontes ice cream, both regional specialties. Tour the cathedral, then peruse the markets and shops for brightly colored ponchos made from llama wool, jewelry fashioned with precious stones and traditional yerba mate mugs.

Asking questions about an item or negotiating may be a challenge, though. Unless they work at hotels and restaurants frequented by foreign tourists, most of Cafayate’s roughly 15,000 residents speak limited, if any, English. Paper and pencil and Googled images on cellphones go a long way in bridging the communication gap.

Before venturing to your first bodega, visit the Museo de la Vid y el Vino, two blocks east of the plaza on Route 40. The museum comprises two sections: the first describing what makes Cafayate such a unique wine region and the second telling the story of local winemaking. Signs are in both Spanish and English, and for 100 Argentine pesos (roughly $2.25), it’s well worth the visit.

Ask for a map of the wine region at the Museo de la Vid y el Vino when you are ready to start tasting local wines. Or, before you leave home, print a map. You’ll find an excellent one at cafayate.com. Then, set out by rental car or taxi.

You don’t need an appointment to visit any of the bodegas except Piattelli Vineyards, but don’t miss it. The most modern and one of the newest, Piattelli looks like it was lifted out of Napa and dropped in the desert foothills a few miles outside of town. Make a lunch reservation when you book your tour and tasting of Piatelli’s vintages from Cafayate and Mendoza. The restaurant’s patio, adjacent to a rose garden, overlooks the vineyards and valley below. 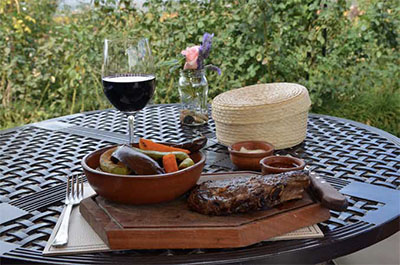 By contrast, Bodega El Porvenir is one of the area’s most traditional wineries. The family-owned bodega offers tours on the hour six times per day, as well as tastings. Be sure to sample El Provenir, the bodega’s premium red blend, and consider timing your visit to lunch. You can dine in the property’s farmhouse, Finca el Retiro, enjoy a picnic lunch with your significant other in the vineyard or eat the empanadas you make during an on-site cooking class.

Another traditional bodega, Finca Quara, is also arguably the most beautiful. Surrounded by immaculately landscaped gardens, the Spanish Colonial building features columns, arches and a wine cellar available for private tastings of its Malbecs, Torrontes, Cabernet Sauvignons and other varietals. Come in March when the bodega celebrates its harvest with grape stomping, music and regional foods. (Argentina’s seasons are opposite those of North America, with December and January its hottest months.)

Several bodegas lie in the town of Cafayate itself, within walking distance of the plaza. One of the most popular, Bodega Nanni pours organic wines, including a sweet Torrontes and a rosé made from Cabernet Sauvignon. Purchase one of the reasonably priced bottles to bring home or to drink in the bodega’s courtyard.

Nearby, Bodega Domingo Hermanos offers an exceptional value. While most tastings start at 100 Argentine pesos, its tastings only cost 50 pesos, roughly $1. For that, you receive four generous pours served with cheese made at the bodega. Plan to spend your time leisurely sipping the wines with your loved one. Afterward, cross the street and take a photo in front of the mural reading “Cafayate.”

American-owned wine bar and restaurant Bad Brothers Wine Experience sits just off the plaza and proves a must. Located in a colonial home, it provides tastings of its high-altitude Bad Brothers wines and extreme-altitude (above 6,500 feet) Sunal wines. Staff manning the tasting area speak English, not always the case at the bodegas, so you can ask questions and gain a deeper understanding of local terroir and wines.

Break up your visit to the bodegas with excursions into Quebrada de las Conchas. Guides around the plaza offer hiking, biking, horseback riding and 4×4 tours into the region. You can also arrange a visit to the Quilmes Ruins, the largest pre-Columbian settlement in Argentina. If you and your partner golf, call to book a tee time at the 18-hole, Bob Cupp-designed course in the La Estancia de Cafayate community.

For those who want to add some romance to their visit, luxury hotel Grace Cafayate not only has the only local spa but also offers a couple’s massage room for side-by-side, one-hour massages followed by use of the room’s Jacuzzi and sauna for an additional hour. Sipping wine and savoring dulce de leche sweets delivered to you after the massage proves the perfect way to celebrate your visit to Cafayate.

Cafayate lies approximately halfway between two international airports. While Teniente General Benjamín Matienzo International Airport in San Miguel de Tucumán lies slightly closer, it is relatively small, and sections of the route to Cafayate are unpaved. The better option is Martin Miguel de Güemes International Airport in Salta. Larger, it is serviced by more airlines and rental car agencies — plus, the paved drive to Cafayate from Salta takes you through the scenic Quebrada de las Conchas.

Where to Stay in Cafayate

VILLA VICUÑA This 12-room boutique hotel just off Plaza Cafayate serves a free breakfast in its courtyard and lies a short walk from bodegas, restaurants and markets. Calle Belgrano 76 $$

PIATTELLI VINEYARDS Open only for lunch, the restaurant at Piattelli Vineyards offers sweeping views of the vineyards from its patio. Savor grilled beef along with a glass of the winery’s best. Ruta Provincial 2, Km. 3 $$