WITH UNPRECEDENTED GROWTH and an abundance of new wealth stemming almost exclusively from its abundant supply of oil and natural gas, Qatar finds itself at a cultural crossroads between the modernization brought about by rapid expansion and the protection and preservation of traditional values as it becomes a more globalized nation.

In Doha, the capital city home to nearly a third of the Qatari population, infrastructure continues to improve at an explosive rate, with 2020 anticipating the completion of Doha’s first metro system and the addition of many new hotels and resorts. This city only recently began incorporating street addresses in a nation that ratified its permanent constitution just less than 16 years ago in the summer of 2004. However, Doha isn’t just using its mind-blowing fortune to play catch-up; it’s looking to the future.

Take Msheireb Downtown Doha, for example. The world’s first sustainable downtown regeneration project, this revitalization of the old commercial district with a $5.5 billion budget adheres to the highest standards of green development in the creation of more than 100 new buildings for living, working, shopping, learning, worshipping and playing. Construction began in 2010, with the impressive neighborhood set to become fully operational this year. 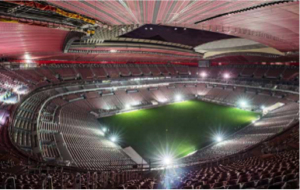 And then there’s the FIFA World Cup. In 2022 Qatar will host the world’s most watched live event, with new stadiums and venues directly in the capital and more beyond. For this first staging of the World Cup in the Arab world, Qatar doesn’t intend to disappoint the millions expected to attend or the billions watching from home.

Tourism is a major focus for Doha’s future, as Qatar looks forward to prosperity beyond reliance on oil and natural gas fortunes. Though many of the city’s recent advances have been in anticipation of the World Cup, Doha isn’t just propping up something like a temporary Olympic Village. Instead, its long- view structural development intends to support increased tourism well into the future as Doha — and Qatar in general — comes into focus for international travelers.

Even before the athletic world launches Qatar to the forefront of the attention of nearly half the world, the small nation on the Arabian Peninsula’s eastern shore has already received a notice- able increase in global traffic. Each of the past five years has seen more international visitors than the preceding year, and all of them pass through Doha, home to the only international airport in the country. But not only international tourism drives Doha’s hospitality strategy.

The dazzling architecture and ever-increasing fine- dining venues consistently entice more and more Doha residents to plan staycations in their home city, reveling in the 5-star properties serving world-class cuisine, often in close proximity to museums and other cultural attractions like the Museum of Islamic Art and the National Museum of Qatar, opened in March 2019.

The majority of Doha residents are foreign nationals, with the greatest percentage hailing from South and Southeast Asian nations, and plenty more from the Levant, North Africa and East Asia. Europe, North America and Australia are represented, as are, of course, a minority of Qataris. With expats dominating the scene in Doha, not surprisingly international cuisine is highly prized in the capital. Perhaps a bit more surprising is that, until recently, foreigners couldn’t own land in Qatar.

Currently, foreign nationals can purchase land in only three zones in the entire country (two in Doha and one about 30 miles north of the city). The most famous of these, The Pearl, was the first to grant this privilege. A multibillion-dollar project, The Pearl is an artificial island roughly 2.5 miles long packed with luxury residences, high-end shopping, exotic car showrooms, gardens and cultural venues, making it a top Doha destination for visitors seeking the jet-set lifestyle.

A peninsula jutting out of a peninsula, Qatar is a nation nearly surrounded by water, and Doha takes full advantage of its coastal location on the Persian Gulf (sometimes called the Arabian Gulf). While contributing to the country’s international reputation in ship repair, water also lends itself well to tourism. Popular Doha activities including paddle boarding at The Pearl, kayaking northward to the Al Thakira Mangrove Forest and cruising in opulent dhows around the harbor.

As Doha opens its arms to international tastes, it’s determined to hold firm to its conservative Islamic heritage and customs, careful not to sacrifice its core beliefs as global influences expand. In fact, preserving these values is a major component of one of the country’s four pillars of achieving its Qatar National Vision 2030, set forth in 2008, of becoming “an advanced society capable of sustaining its development and providing a high standard of living for its people.” It’s a balancing act well underway and sure to be tested as the world knocks at its door in 2022.

What current trends in Doha are attracting the attention of international travelers, and what’s on the horizon for the city?
In March 2019 Qatar welcomed the National Museum of Qatar, designed by the renowned architect and Pritzker Architecture Prize winner Jean Nouvel. Qatar as a country — and especially the capital city of Doha — continues to put art and history at the cultural forefront in terms of tourism offerings. Outside of these, a rising trend within Qatar lies in the realm of sports. As part of Qatar’s ongoing efforts to grow awareness of the destination, a variety of world sporting events will be held in Doha in the upcoming years, namely the FIFA World Cup 2022. With new offerings and accommodations and the upcoming FIFA World Cup, Doha will certainly continue to see a growth in cultural tourism, especially based in the sports sector. Qatar also continues to be of interest to international visitors looking for lesser-known, off-the-beaten- path destinations. With the rise in adventure travel around the globe, Qatar’s authenticity and uniqueness are great drivers for tourism growth.

What message is Doha hoping to send to grab the attention of the world’s travelers?
Qatar’s culture, authenticity, hospitality and unique offerings lie at the center of our messaging. While still widely untouched by travelers from the United States, Qatar offers a heritage-rich destination with affordable luxury and activities for all types of travelers. Beyond the bright lights of Doha and its stunning 5-star properties, travelers can experience desert safaris, water sports in the beautiful Arabian Gulf, shopping (both luxury and bargain hunting), stunning museums and year-round festivals and activities. The city is also focusing on expanding the calendar of festivals and events to attract an even wider array of visitors.

How convenient is it for international travelers to enter Qatar for a visit to Doha?
Qatar is now the most open country in the region thanks to its visa waiver policy, allowing citizens of more than 80 countries to visit Qatar visa-free. With a passport valid for at least six months and proof of an onward ticket, waivers are provided on arrival, so no advance paperwork is needed. The United States, Canada and the United Kingdom are among these 80-plus countries. 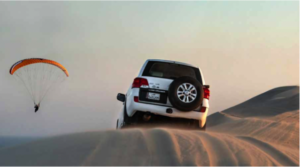 While Doha explodes with cultural development to attract new international arrivals and entertain its steadily growing staycation market, creating an ever-changing map of must-see attractions, a handful of crowd-pleasers shouldn’t be missed on any first visit to the city. The Souq Waqif, Doha’s famous market, features colorful spices and locally made souvenirs ranging from clothing to art, alongside dozens of restaurants and shisha (hookah) lounges. The newly opened National Museum of Qatar, just 10 minutes from Souq Waqif by car, is an architectural masterpiece housing a collection of multisensory galleries telling the story of the Qatari people, past, present and future. Complete a Doha trip with a dune-bashing desert safari experience just beyond the city, and visit the natural wonder of Khor Al Adaid, better known as the Inland Sea, just 40 miles outside of the capital.

COMING AND GOING
U.S. citizens can visit visa-free but must have a passport valid for six months with two blank pages, plus proof of an onward ticket.

MANDARIN ORIENTAL, DOHA
One of Doha’s newest 5-star properties, Mandarin Oriental, Doha is surrounded by upscale shops and boutiques and just a 15-minute walk to major museums and sites.

SHARQ VILLAGE & SPA
This Ritz-Carlton resort proves as popular for secluded staycations as for interna- tional jet-setting. The private beach and ideal location just minutes from top sites make it a preferred choice.

MORIMOTO DOHA
The first Middle East restaurant from Iron Chef Morimoto, the interior is as lavish as the menu, featuring gold-studded columns and original paintings from Japanese artist Hiroshi Senju.

INFO TO GO
International flights arrive only at Hamad International Airport, just south of the city and generally a 20-minute drive to the downtown area. Taxis are readily available but accept only cash, with ATMs located near the taxi pavilion. Inexpensive buses are also available and must be paid using a Karwa Smartcard that can be purchased in the airport or directly from the bus driver.