CONSISTENTLY VOTED ONE of Europe’s best walking cities, Copenhagen offers visitors miles of parks, pedestrian-only streets, castles and museums, and great food — everything from a simple Tivoli Gardens hot dog to fine-dining restaurants ranked among the best in the world.

During your visit, you can choose to walk among the historic mansions of Frederiksberg, a neighborhood that retains its independence and isn’t even technically a part of the city. Or head to Christiania, a hipster area along the waterfront that represents the liberal freethinking of independent Danes. However, if your time in Copenhagen is limited, the Latin Quarter has it all. 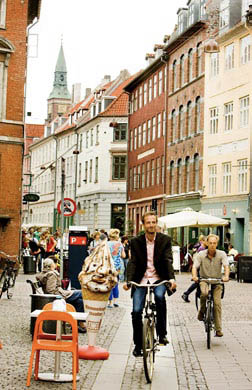 Centrally located in downtown Copenhagen, the Latin Quarter offers 5-star hotels and fine-dining restaurants plus quick and efficient transport to almost every other part of the city by the Metro, city-supplied bikes, city bus or clean and efficient cabs (most drivers speak English). Danes, being a hardy lot, often prefer to just walk. After all, Copenhagen boasts Europe’s longest pedestrianized shopping street, at about a mile, beginning at Rådhuspladsen, or City Hall Square.

The Latin Quarter is bordered on the north by Indre (Old Town), home of the famous Little Mermaid sculpture, and on the south by the island of Slotsholmen and the parliament buildings, Christiansborg Palace and the Royal Library. To the east lie the canals and cafés of Nyhavn and the Royal Palace, castle and museums of Amalienborg. To the west you’ll find the wonder of Tivoli Gardens.

In every direction the Latin Quarter gives visitors the chance to stretch their legs and explore the many museums and different parts of the Københavns (Copenhagen) University system. The Quarter contains the most 5-star hotels, including the Hotel Skt. Petri and the Nimb Hotel, as well as highly recommended restaurants such as the København, Rene’s Brasserie and the Restaurant Grøften in Tivoli, which serves traditional Danish dishes as well as gluten-free bread and sugar-free desserts. For high rollers, the restaurant Geranium, holder of three Michelin stars, lies just a short cab ride away.

A vibrant club and nightlife scene hums throughout the city, but a large concentration lies just a few blocks north of the Quarter on the way to Old Town, including the popular LGBTQ club Oscar Bar Café and the famous Copenhagen Jazzhouse.