Escape to Antigua and Barbuda

BEAUTY AND TRANQUILITY have attracted the rich and famous to Antigua for decades. With a dimpled shoreline interspersed with sandy coves, the island claims to have a beach for every day of the year, many fringed by reefs kaleidoscopic with fish. The interior is hilly and draped with lush, tropical cover.

Antigua, an island in the Caribbean’s Lesser Antilles, has been an important regional hub for trade and transport for centuries. It still is. When international flights arrive at V.C. Bird Airport, many of the passengers decant into smaller planes for onward journeys to neighboring islands.

One of those islands is Barbuda, 30 miles to the north, which together with its larger neighbor forms the nation of Antigua and Barbuda. The majority of the country’s population of 90,000 live on Antigua, location of the country’s capital, St. John’s, as well as plenty of large resorts and all the supporting infrastructure that goes with them. Barbuda, by contrast, is the archetypal barefoot paradise, a flat coral island on which seabirds vastly outnumber humans.

Christopher Columbus initially sighted Antigua in 1493, but it remained without permanent settlements until the British arrived in 1632. They established sugar plantations and imported an enslaved workforce from Africa. Descendants of those slaves make up 80 percent of the current population.

Although Antigua and Barbuda gained independence in 1981, the ties to the United Kingdom remain strong. Vehicles are driven on the left (officially, though on minor roads it’s often hard to tell), cricket is the dominant sport, and Queen Elizabeth II is the head of state. 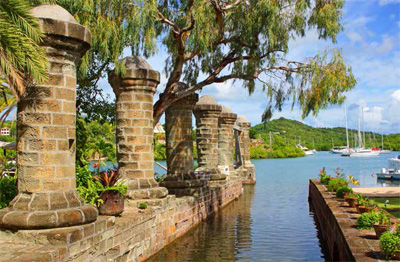 There are many physical remnants of Britain’s long history here, not least Nelson’s Dockyard, one of the best-preserved colonial sites in the Caribbean (recently granted UNESCO World Heritage status). This naval yard jutting out into the sheltered waters of English Bay in the south of Antigua was constructed in the 18th century, and from here Horatio Nelson (later to become one of Britain’s greatest heroes) policed the Caribbean, intercepting trading vessels bound for the newly independent United States.

Echoes of Nelson’s time here persist. As you walk between the old buildings and tread on the heavy stonework of the quayside, you can imagine the tall ships at anchor and the noisy bustle of an active shipyard. The naval fleet is long gone, but English Bay remains a haven for sailboats, with dozens of craft rocking gently at anchor, protected from the squalls and storms of the Atlantic.

Although the capital city of St. John’s, on the northeast coast, predates the dockyard, an earthquake obliterated much of its history in 1843. In its current incarnation, the city is a picturesque jumble of buildings — many constructed from wood — painted in pastel colors. When the Caribbean cruise ships dock here, they overshadow the modest skyline. With one exception.

Since the 18th century, the imposing twin towers of St. John’s Anglican Cathedral have dominated the city. The building, badly damaged by the 1843 quake, was repaired from within. A pine superstructure of pillars and beams transformed the interior into something resembling the inside of an old warship (though be aware it is currently undergoing renovation and is not at its best).

The cathedral’s historic influence over daily life in Antigua is matched by another hodgepodge structure just two blocks away: the Antigua Recreation Ground, one of the world’s most famous cricket venues.

Since 2007 most international matches have been hosted at the new Sir Vivian Richards Stadium to the east of St. John’s (the England team will be the opposition in March 2017), but the old Recreation Ground retains a special place in the hearts of all cricket lovers in the West Indies and beyond.

Antigua’s biggest draw is undoubtedly its beaches, typified by the Five Islands peninsula west of St. John’s. Here the coastline, indented with idyllic crescents of white sand, embraces luminously turquoise water. The ruined Fort Barrington, embedded atop a headland, provides the perfect vantage from which to survey this vision of paradise. 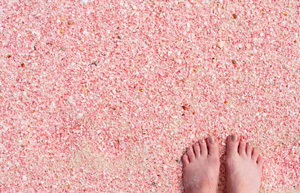 Although Antigua’s beaches are never exactly crowded, for the full Robinson Crusoe experience you need to head to Barbuda. Here the powdery beaches (often tinged pink) and crystal-clear waters are at their purest. You can stroll along the surf line for miles with barely a soul in sight.

For a respite from lounging in the sun, head to Barbuda’s Frigate Bird Sanctuary, where around 5,000 frigate birds nest in the mangroves around Codrington Lagoon, the males attempting to attract females by inflating red throat pouches to the size of a football. It’s a breathtaking spectacle.

The frigate birds were the pioneers. They discovered what the Royal Navy, Eric Clapton, Oprah Winfrey, Paul McCartney and a host of other famous and non-famous tourists since confirmed: Antigua and Barbuda offers a calm retreat, sheltered from turbulent waters.

Antigua and Barbuda Info to Go

International flights arrive at V.C. Bird International Airport at the north end of the island. Many resorts offer transfer services. If you choose to rent a car, be aware Antiguans drive on the left. Montserrat Airways runs regular flights from V.C. Bird to Barbuda’s Codrington Airport; the flight takes 20 minutes. Alternatively, you can make the crossing by ferry; the voyage takes 90 minutes with Barbuda Express, usually departing Antigua at 9 a.m. (noon on Sundays). There is no service on Mondays or Wednesdays. U.S. citizens visiting Antigua and Barbuda require a valid passport, an onward or return ticket and confirmation of accommodation.

Where to Stay in Antigua and Barbuda

COCO POINT LODGE This laid-back, small resort (capacity 68 guests) occupies its own peninsula at the southern tip of Barbuda, with 2.5 miles of white-sand beaches on its doorstep. Barbuda $$$

CURTAIN BLUFF On the southwest coast of Antigua, this all-inclusive resort offers the ideal sporty option, with watersports, world-class tennis facilities and a choice of two beaches. Old Road, Antigua $$$$

JUMBY BAY, A ROSEWOOD RESORT This resort on a private island two miles off Antigua’s north coast is accessible only by seven-minute boat ride. The 300-acre island can be explored by bicycle. Jumby Bay Island, Antigua $$$$

Restaurants in Antigua and Barbuda

IT’S A BIT FISHY Enjoy Caribbean cuisine at its most unpretentious — fresh fish grilled or steamed. Usually only open in the evenings, but they’ll do lunch if you arrange in advance. River Road, Codrington, Barbuda $$

Escape to the Lush Tropical Wonders of St. Lucia

Retreat into Luxurious Stillness at The Rittenhouse Spa & Club

The Rittenhouse has long stood out as one of Philadelphia’s finest hotels, centrally located in one of the city’s poshest neighborhoods. Needless to say, I knew I was in for an afternoon of luxurious pampering when I hopped in my car and headed down I-95 from my suburban home to the heart of the City of Brotherly Love. As I drove through the seemingly endless roadwork on the highway, I realized just how long it had been since I’d driven this once-familiar route into the city as a result of the pandemic. Of course I was eager for the relaxation and bliss that was in my future, but it was also a welcome feeling to head back into Philadelphia for a moment of normalcy.