Although Melbourne is projected to overtake Sydney as Australia’s largest metropolitan area by 2026 (squeezing by with 6.2 million residents to Sydney’s 6 million), Sydney’s spectacular location between the Tasman Sea and the Blue Mountains and its ongoing economic prosperity will continue to attract millions of business and leisure travelers every year.

The Ovolo Woolloomooloo Finger Wharf is a deluxe boutique property with a waterside location adjacent to a marina and views of the city skyline. This colorfully designed, 100-room hotel offers a large lobby always buzzing with locals and guests, and the hotel’s fitness center and pool are open 24/7, making it easy to exercise before or after a busy workday. Its signature Alibi Bar is a sleek multipurpose social area designed for business guests to work, network or simply relax with a drink. Business guests can reserve exclusive use of the Alibi for cocktail parties, product launches and client meetings, or book a private meeting space within the hotel.

Another great hotel for business travelers is the new 349-room Crown Towers Sydney. The 75-story glass tower opened in December 2020, along the harbor in the Barangaroo district. It features upscale accommodations and a restaurant line-up that includes a’Mare, Woodcut, Nobu and Yoshii’s Omakase, all excellent venues for client lunches. The Crown Spa Sydney encompasses 21,500 square feet with terraces for yoga and meditation, vitality pools, experience showers, infrared saunas and treatment rooms. Both the Ovolo Woolloomooloo and Crown Towers properties lie within walking distance of the Central Business District. 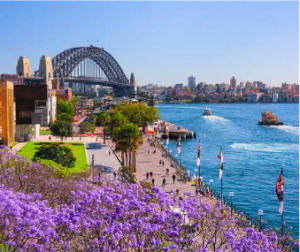 Discover other venues in The Rocks historic district, located almost beneath Sydney Harbour Bridge. Locals and visitors shop the open-air Rocks Market for street food and eccentric clothing, and some of the city’s oldest pubs and most sophisticated restaurants reside here. The nearby Museum of Contemporary Art occupies a historic waterside Art Deco building with a five-story modern wing. The MCA offers meeting rooms and private event spaces, including the use of the spectacular rooftop sculpture terrace with views of Sydney Harbour Bridge and the Opera House.

Bar 83 sits atop Sydney Tower in the CBD, offering a spectacular view from the 83rd floor. Located in the tallest building in Sydney, it proves a great choice for lunch or afternoon drinks in the public area or a client meeting in one of its private spaces.

For a pleasant lunch location outside the CBD, head to Mimi’s, opened in 2020 on the second level of the historic Coogee Pavilion, a trendy seaside venue just 20 minutes south. The main dining room offers sweeping views of Coogee Beach along with the laid-back, Sydney-style atmosphere, and there is fresh fish and seafood on the menu. If you arrive in late afternoon, check out the Pavilion’s rooftop bar for drinks, food and views of a shoreline often filled with surfers. Dress at the Pavilion ranges from casual to beachwear, especially during Sydney’s summer months, December to February.

The New South Wales state government devotes much of its capital spending to major transportation projects. London-based Zaha Hadid Architects and Australian-based Cox Architecture designed the new Western Sydney International (Nancy Bird Walton) Airport. Construction started in 2018, with completion expected in 2026. The new Sydney Metro West line project, begun in 2020, will open in phases and link the CBD to the new airport, transforming western neighborhoods into more vibrant residential, business and retail communities along the new nine-station route. A big part of the new airport project is Aerotropolis, a smart city designed from the ground up as a place for technology, science and creative industries.

A staggering number of urban revitalization projects taking place in Sydney include the completion of Sydney Modern and a new addition to the Art Gallery of New South Wales, opening on a site overlooking Sydney Harbour in 2022. The mixed-use $2.5 billion Central Place Sydney development will open in 2025 with two 30-plus-story towers. And architect David Adjaye is creating Sydney Plaza, a multifunctional building and public square shaded by a huge, perforated metal canopy, designed with Aboriginal artist Daniel Boyd and slated to open in 2022. The NSW government is also revitalizing Blackwattle Bay, including building a modern new Sydney Fish Market, a popular venue among locals and visitors. The total project, completing in 2024, will provide new residences, mixed-use commercial buildings and expansive green space, all within walking distance of the CBD. 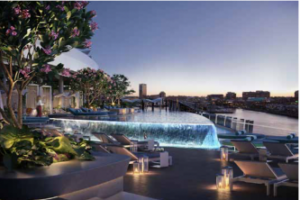 Called one of the 10 best surf cities in the world by Surfer magazine, Sydney’s 70 surfing beaches offer varying levels of difficulty. Whether you’re ready for a lesson, an experienced surfer or just eager to hang out at a beach café, Sydneysiders are a friendly group. The glorious beaches of Sydney are where many of the city’s business owners, attorneys, architects, retirees and journalists go to have fun and stay fit. In many ways, a sun-drenched beach may prove the best venue for that important client get-together.