The charming M. Placé recounts how his chance meeting with a Texan at a wedding in France and his ensuing marriage led to him becoming a San Antonio resident. This led to his becoming a respected presence in the local food scene. The story makes one thing surprisingly clear: Homespun French brasserie fare and Texas-style fine dining actually have a lot in common. Although Placé, Réa and Sérot hail from different regions of France, the rich, comforting dishes are rooted in their respective grandmothers. And as Placé continues his engaging story about what led to Mon Chou Chou’s opening in the Pearl District in winter 2020, it becomes obvious why this brasserie fits so perfectly into a uniquely American food landscape known internationally for its upmarket steakhouses. 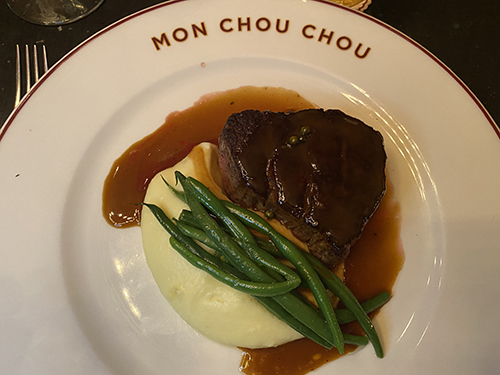 In other words, while practically everything on the menu is unquestionably French and elegantly presented, the servings are Texas-sized, sharable and served in a welcoming, relaxed San Antonio kind of way. Placé also points out that, as San Antonio and Paris are both culturally diverse places, the trio intuited that the Mon Chou Chou idea would make a perfect fit. The hearty, frankly cheese-heavy menu reflects this: Swiss-inspired raclette cheese on crusty French bread; flawlessly juicy roasted chicken; pavé de salmon dressed in a Béarnaise sauce; comté-filled raviolis in gruyère cream sauce; and onion soup served “gratinée” in the Lyonnaise tradition. The prime steak dishes certainly drive Placé’s point home.

The desserts, meanwhile, are exactly what you expect … decadent. The menu is rounded out by simple, but French sides (frites, “haricot vert”/long beans, creamy cheese polenta and gratin de macaroni) and condiments (Cognac peppercorn, Béarnaise, red wine shallot demi-glace and porcini butter) that also happen to be right at home in Texas. Though dining light here is not easy, there are manageable sandwiches that are superb for a lunchtime splurge, such as the croque monsieur and croquant de brie. Light options also include beautiful expressions of Niçoise salad and endive salad.

This summer, Monaco hosts an array of exciting events for both visitors and locals to enjoy. Its location on the Riviera already makes it a hot spot for summer travelers, but the lineup of upcoming events will see even more visitors flock to the region. From sporting events to art exhibitions to food festivals, Monaco offers a summer packed with both new and beloved and returning experiences.