Have you checked out the September issue of Global Traveler yet? We’re pleased this month to once again bring you our Cruising Issue, last published in 2019 before the pandemic left the cruising industry dead in the water for nearly two years. In March I was able to see for myself that it’s happily sailing along quite nicely once again, and I’ve already shared some of my experiences on a Mexican Riviera cruise with Princess Cruises aboard the brand-new Discovery Princess. (Check out my GT Tested review of the cruise in our latest issue.) I’ve mostly described the ports of call and my shore excursions (Princess has been recognized by our readers for seven consecutive years as having the Best Cruise Ship Excursions in our annual Leisure Lifestyle Awards) in past blogs, though, so in recognition of our September theme, my blogs this month will be focusing on my shipboard experiences.

For four consecutive years, Princess Cruises has received Global Traveler‘s Leisure Lifestyle award for Best Cruise Line Entertainment, and only a few days aboard the ship confirmed to my husband and me that the accolade is well-deserved. The afternoon we boarded in Los Angeles, most of the guests seemed to be gathered on the Pool Deck for the sail away party. Here a giant screen towered over the two-level deck lined with lounge chairs, which provide comfortable seating for taking in recorded concerts, live sporting events and Movies Under the Stars — all day and well into the night. 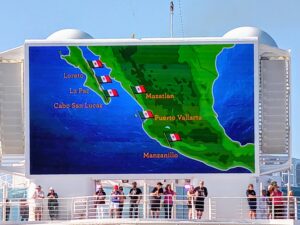 I went wandering to check out the rest of the ship and its various entertainment venues while they were uncrowded.

The three largest spaces all reside on Deck 7, the Promenade Deck. The Vista Lounge offered everything from trivia games and bingo during the day to karaoke, live performances and DJ-hosted tunes as well as comedians and magicians in the evening. Clusters of comfortable chairs and tables and a bar turning out inventive cocktails made it a fun space. Midship lay the Princess Live! Café, serving specialty coffee drinks and cocktails alongside audience-participation game shows and solo, duo and small-group performers presenting music of many genres.

The elegant Princess Theater sits forward on the Promenade Deck 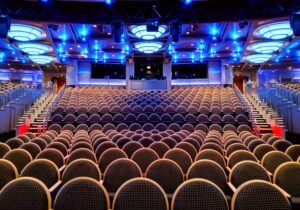 and accommodates hundreds of guests in plush seating.

There isn’t a bad seat in the house, with unobstructed views of the stage and state-of-the-art sound and light systems providing the basis for impressive productions. We took in several shows here during the week and enjoyed every one. We saw just a few numbers from Uptown, a high-energy Motown revue with great vocal performers, followed by comedian Carlos Oscar, a very funny guy. Later in the week we ran into him as we were strolling about the ship (one of the fun and unusual perks of cruising) and found him as relatable and down-to-earth one-on-one as he was on stage.

Magician Michael Misko dazzled and amazed us another evening, and comedian Steve Caouette was a big hit with his witty sarcasm and a very funny bit he worked up with the audience. I believe it was spur-of-the-moment on his part, but early in the show he grew distracted and a bit annoyed at late-comers drifting in to their seats. He directed us to follow his lead, and whenever someone else straggled in, he would give us the signal and we would all stand, turn, and applaud the unsuspecting individual. Everyone got a kick out of being in on and part of the joke, and it allowed him to do some off-the-cuff banter with the offenders.

Caouette returned on the final night to share the stage with another performer we really enjoyed in a solo act on another evening, Jeffrey Allen, in a tribute performance as Sir Elton John. He nailed the costumes, the glasses and the songs as well as the piano accompaniment for an entertaining evening.

Princess really pulled out all the stops on Friday evening, though, with a Broadway-style production, Rock Opera. The costumes, lighting and set pieces, including turntables and elevating stages, dazzled the eyes, while the voices of the performers truly were operatic as they performed a number of iconic rock anthems with intricate choreography.

Aside from the featured productions, though, one could find musical entertainment throughout the ship virtually any time of day or night. The Piazza, a three-story plaza and gathering spot at the center of the ship, 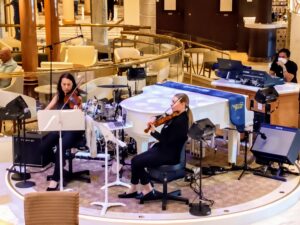 and several smaller lounges offered an assortment of music. Crooners Bar usually featured a singer/pianist, while the Take Five Lounge offered jazz in a speakeasy atmosphere. 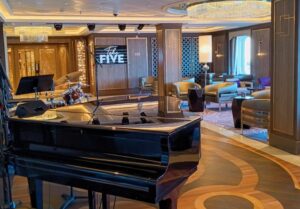 Yes, I’d say Princess’ awards are well-deserved, and guests, no matter their musical or entertainment preferences, will find something to amuse and delight them on board.