I SEARCHED HIGH AND LOW, but it appears my annual 20-yearplus Myrtle Beach trip has not resulted in a review of the only Gary Player signature course on the Grand Strand — Blackmoor. The famous South African golfer is best known for his walk-through swing in which he begins walking forward before completing a normal swing. If you have never seen his swing, I recommend a quick internet search, as it is quite incredible. Player has become one of the best course designers, and at Blackmoor he built this Grand Strand beauty on Longwood Plantation and the Waccamaw River, once the home of a rice plantation. Those playing the course come across ancient graves that litter the sides of some holes.

In his design, Player heeded the undulating topography — possibly thinking of his home courses in South Africa — and used what nature offered to create a playable and challenging course. Player is known as one of the most traveled golfers, and he designed courses all over the world; some remain the most respected among golfers at all levels.

For me, Blackmoor was an afternoon round completing a day of 36 holes. I teed up with Mike Donahue (chairman, GT Advisory Board), Jimmy Spratt (internationally renowned security expert specializing in canine surveillance) and John Ecklund (IBM executive).

We duly noted the brand-new cart paths on mostly the front nine and encourage this improvement to continue. The course was in fine shape and has some tricky holes, which I wish we had the opportunity to replay after a little “Player” knowledge.

HOLE 3 | 514 yards, par 5
I think we might have approached Hole 3 with not enough trepidation. Many are fooled by the playable yardage of this par 5, and it can take the best of you.

Jim played by the book with a spectacular albeit sneaky par on this hole. He did this by shutting out John’s thrashing and Mike’s and my dribbles to the green. Your drive must favor the left side of the fairway so your second shot can clear the all-absorbing marsh on the second shot. Some hitters lay off the driver for a 3- or 5-wood so they do not reach the marsh on the drive. Once you clear the marsh, it is smooth sailing to the green.

HOLE 9 | 372 yards, par 4
Nine is a nice front nine finishing hole and offered me the opportunity to card a par and a trio of bogeys for the rest of the foursome.

A well-placed drive is key, as water and bunkers run along the left side and the entire right side is out of bounds. I hit a near-hosel shot that luckily had enough power to launch me to the fairway dead center. The green features many contours, and landing it on your approach is important. Mike caught the large pot bunker near the green, with a tremendous out to the green to our cheers.

HOLE 10 | 411 yards, par 4
John and I decided we were not going to allow the only dogleg left at Blackmoor and the No. 1 handicapped hole to get the best of us. Course regulars know the two mounds at the turn of the dogleg make a good target from off the tee, and we nailed a couple of clean drives to position A.

The well-bunkered, oblong-shaped green is best approached from the right side. Somehow, both John and I got on in regulation, scoring par — quite an achievement on the 10th! 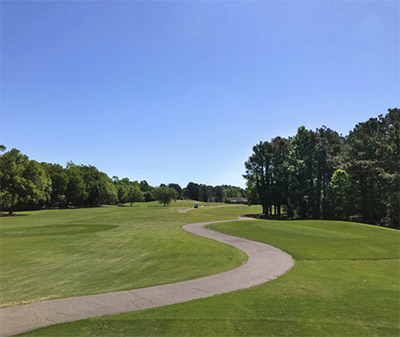 HOLE 14 | 390 yards, par 4
I am still in a tizzy over 14. At the tee box, the starter, Sammy, came over to chat and discuss the best strategies. He recommended this and that, and we fired away. He said my drive was less than 90 yards from the green; it was not. What Sammy was trying to tell me was this dogleg right offers some driving options. Hitters who can drive a ball more than 240 yards can try to cut the corner by going over the trees (which he thought I achieved). Go beyond this distance and you will likely blast through the fairway and reach the water. This is one hole I would have liked to replay afterward.

In Player style you are likely to see some alligators sunning on the banks here — yes, alligators, not South African crocodiles!

Although John and Jimmy made the hole appear easy, scoring a pair of pars, the same could not be said for me and Mike.

HOLE 16 | 413 yards, par 4
From the tee box there is no sight to the green; it is a completely blind shot. Drives pulled left are capable of catching the water that lies to the left side. Too far right and you can be out of play — or, like me, close to the hole but on a steep hill with no visual of the green. Mike and I placed our drives within a few yards of each other on the deep slope. Jimmy and John played the smart move, landing straight ahead and offering a direct approach to this dogleg right. The course management, noticing directional issues the hole causes (and to eliminate slow play), hung an arrow in a large tree behind the hole, pointing to the green. Brilliant, I thought, and although I swung wildly and at an angle, I could guesstimate the distance and direction and land on the green in regulation. I turned a lousy drive into a good play while the rest of the team carded a bogey and a pair of double bogeys. Par was a great win, considering!