According to the Bureau of Transportation Statistics, in 2015 John F. Kennedy International Airport dropped to 76.43 percent for on-time arrivals and 77.99 percent for on-time departures, though the airport still kept ahead of nearby competitors LaGuardia International and Newark Liberty International airports. JFK also had the longest wait times of the 10 busiest international airports in the United States, particularly in Customs, where passengers waited an average of 25 minutes, a 13 percent increase from wait times in 2014, according to stats compiled by Global Gateway Alliance. JFK actually backtracked from a two-year trend of reduced wait times which initially resulted from the installation of Automated Passport Control kiosks. However, poor rankings and long waits are hardly keeping JFK down. Together with LaGuardia and Newark, the three airports saw increased traffic of 7 million over last year, servicing a combined total of 124.2 million passengers. JFK served the most domestic, international and total passengers of the three, with 26.8 million domestic passengers and 30 million international passengers. The Port Authority of New York & New Jersey reports this combined traffic leads to $80 billion in annual regional economic activity, providing more than 570,000 jobs. “Our mandate to modernize our airports under a decade-long $8 billion capital program is enhanced by yet another year of passenger growth. Efforts already well under way will not only deliver new innovations and increased services for our traveling public but also will power our regional economy and fuel job growth for the next generation of airport-based employees and businesses,” said Pat Foye, executive director, Port Authority of New York & New Jersey. Passengers flying out of JFK will already see some of these innovations and new services this year, with more to come. In January, three terminals implemented a new facial recognition system developed by Unisys Corp. The program scans live facial images while simultaneously retrieving passport data in order to better identify travelers attempting to enter the United States using fake or stolen passports. 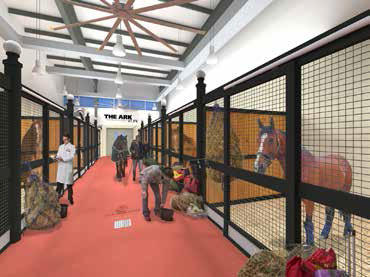 Scheduled to open mid-2016, The Ark at JFK, the airport’s answer to animal cargo, is well under way, after ARK Development leased Cargo Building 78 from the Port Authority to create the $48 million, 14.4-acre facility. When it opens, The Ark will be the only private animal cargo terminal in the world with direct taxiway access and an aircraft parking ramp. The facility will include a USDA-approved, 24-hour quarantine for household pets, birds, horses and livestock; a luxury boarding service complete with spa and training center; and a veterinary hospital. Next year, Runway 4Right-22Left will receive a major overhaul during a 90-day closure. In addition to a complete resurfacing, a new high-speed taxiway will be built off the runway to reduce ground delays. A variety of airlines are also bringing new business to JFK. TAP Portugal will begin flights from JFK to Lisbon Airport July 1, Delta Air Lines extended its seasonal service to Reykjavík’s Keflavík International Airport through September, and Air Serbia now offers service from JFK to Belgrade Nikola Tesla Airport as of this year.