As travelers, we oftentimes find ourselves looking out airplane windows, gazing at the patchwork of the world below as we fly over at 30,000 feet. When we’re on the ground waiting for our flights, we watch planes take off and land and taxi to and from their gates in what can be interpreted as an intricate dance, each step carefully planned and exact, yet fluid. If passing by an airport at night, we see the lights of planes lining up in approach for their landings, one after the next after the next.

Keeping all of these planes moving on time and in the direction they should — not to mention the thousands of passengers on board the planes — takes coordination, precision and expertise. This is where the role of an air traffic controller comes in.

According to the Bureau of Labor Statistics, there are 24,500 air traffic controller jobs in the United States, with a projected outlook of an increase of 4 percent by 2030. The bureau defines an air traffic controller as someone who coordinates the movement of aircraft to maintain safe distances between them. 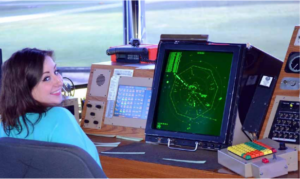 Just what does all of this entail? For insights into a day in the life of an air traffic controller, Global Traveler spoke with Tara Samadifard, an operations supervisor with the Federal Aviation Administration at Milwaukee Air Traffic Controller Tower and Terminal Radar Approach Control facility. Samadifard majored in aviation management with concentrations in airport management and air traffic control at Purdue University, but her interest in aviation started long before college.

“I’ve always been interested in aviation, since I was a kid,” said Samadifard, whose father was an engineer who worked on planes and helicopters. “As a kid, I found it fun to go to the airport and watch the planes land and take off, especially at night with the lights. I thought it was the coolest thing ever.”

When she started college, she was not sure which career path to choose and started researching aviation options “because I was so interested.”

“I stumbled across air traffic control and took a few classes,” Samadifard recalled. “I completely fell in love with it.”

After graduating from Purdue, Samadifard began her career as an operations supervisor with a contract airline cargo company before deciding to further her studies to become an air traffic controller. At an academy in Oklahoma, she learned how to work in a tower and the basics of air traffic control to prepare her for her new career.

Samadifard joined the FAA in December 2014, when she took an air traffic control specialist position at Bismarck Air Traffic Control Tower and Terminal Radar Approach Control in North Dakota; she made the move to Milwaukee in 2018.

In her role as operations supervisor in Milwaukee, Samadifard enjoys a strong line of communication with her team in the control tower. She said there are usually three to four people in the Milwaukee tower at a time, and each has their own role.

“There is usually someone who’s the ‘secretary,’ of the tower, collecting information for planes, their flight plans and making sure their routes look okay,” Samadifard explained. She added there is also a clearance delivery position; a ground control position that oversees taxiing to and from the runways; and a local control position that tells the pilots when to take off and land. As the operations supervisor, she ensures everyone and everything is working according to plan.

“We’re the eyes and ears of everything,” said Samadifard. “When we work together as a tower team, it’s ‘see something, say some- thing.’ … Nothing is a secret in air traffic control. Everyone needs to work together.”

In addition to working with her air traffic control team, Samadifard also collaborates with myriad departments within the airport to ensure smooth operations in regards to maintenance, winter snow operations and VIP movements.

“My position oversees a little bit of everything,” she said. “That’s my favorite part of the job, that every day is different. You may think you know what you’re walking into, but it’s never the same.” 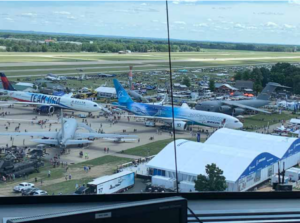 Samadifard also oversees air traffic control measures for special events like AirVenture Oshkosh, one of the largest fly-in events in the United States. The event features all types of airplanes, from antique and refurbished to planes of the future, like eco- airplanes.

“It’s a really fun event, really different, and there are air shows every night,” Samadifard said of AirVenture. “We’re making sure everyone is safe because there are a lot of planes in the air at the same time.”

When it comes to the workplace, Samadifard is one of the few women in air traffic control, but in Milwaukee there are several women among her colleagues.

“Some shifts, the entire tower is full of women,” she said. “There’s a different perspective [when it’s all women], but of course we all work together, no matter what.”

To that end, Samadifard was part of Women in Aviation during her time at Purdue and said she is still involved in outreach through her local safety council.

“We do a lot of outreach [in Milwaukee] with younger groups and people of color who are interested in aviation,” she said. “This is the most amazing job in the world, and the more people we can reach, the better for the FAA.”

After the first of the year, Samadifard is making a move to become an operations supervisor at Indianapolis Air Route Traffic Control Center.

“It’s going to be a completely different environment than what I’m used to,” she said of her move to her hometown of Indianapolis, noting she started at a small airport and moved to a medium-sized airport in Milwaukee.

“[Indianapolis] will be a completely new ballpark — a lot of new planes, a lot of new rules, and I’ll be in charge of a lot of people,” she said of looking forward to her new role. “I’m excited to get back home to family, too.”

When asked about the future of air traffic controllers and the aviation industry as a whole, Samadifard said one of the things she really enjoys at Milwaukee is the relationship she and her team have with the pilots. The communication lines are open between air traffic control and pilots in regards to what is wanted on both ends, and how everyone can work to make those things happen.

“I really think that’s the future of where we’re going, with better communication and more efficiency,” she said. “Young controllers are coming in and looking to find safe and efficient operations we can [incorporate].